When one ride changes a life forever 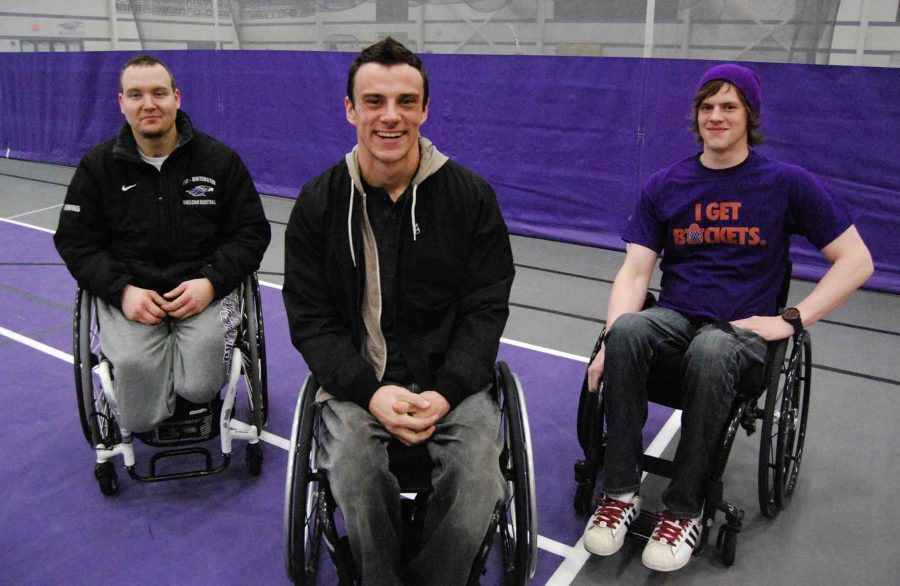 Three men on the wheelchair basketball team share their stories of becoming disabled.

Many students walk to class and climb stairs everyday. But what happens when those abilities are taken away in the blink of an eye?

Freshman David Fleming, junior John Piazza, and freshman Sam White know exactly what this feels like. All three were injured in motorcyle accidents which left them disabled.

Though the three come from different backgrounds, in the end, they all come together as one with a passion for riding motorcycles and playing wheelchair basketball.

All three men moved to Whitewater with hopes to study while they play for one of the most prestigious wheelchair basketball teams in the nation.

Fleming, 28, is originally from Huffman, Texas. He is studying accounting.

His life drastically changed when a woman driving a truck failed to stop at a stop sign. She drifted into the lane where Fleming was riding, and a collision caused him to fly off of his motorcycle. He was then run over by another car. He was 19 years old at the time of the accident.

“No matter what happened, I can’t take it back,” Fleming said. “I can’t change what happened. I can only make the best of it.”

Looking back, Fleming said this is one of the “best things” that has ever happened to him.

“Because of my accident, it has made me who I am today,” Fleming said. “I’m pretty happy with where I am.”

Piazza, 27, is not only a member of the men’s wheelchair basketball team, he is also a campus assistant.

He transfered from Redding, Calif., and he is pursuing a bachelor’s degree in history with an emphasis in Middle Eastern history. He hopes to attend graduate school and become a professor at a community college.

Piazza was riding home from a friend’s house when his accident occurred. He was turning around the corner when his bike hit the gravel and went into the dirt. He rode out from the dirt and stopped, which caused him to do a frontflip. He landed on his tailbone.

“It was completely my fault. There was no one to blame,” Piazza said. “It was just my inexperience as a rider.”

Piazza recalled that the accident was exactly six months after his birthday. He was 20 years old.

Piazza said the accident did not deter his love of motorcycles.

“I still love motorcycles to death,” Piazza said. “I see one and still would love to hop on a motorcycle.”

White, 25, was born and raised in Adelaide, Australia. He is also a freshman majoring in information technology.

Unlike Fleming and Piazza, White’s accident was due to motocross racing.

He was out practicing with some friends on a remote track they had created about half an hour out of town.

He was in the middle of a lap when he went through a section of the track that was severely rutted out, and while on a step up ramp, the bike got out of control. He flipped over the handlebars with the rear suspension fully compressed.

White said he could not perfectly recall what happened after that, but he landed on his back and broke his spine. White was found 40 minutes after the accident.

People deal with accidents like these in different ways. Many deal with depression, denial or anger.

Struggles are inevitable, but Fleming, Piazza and White said the hard times always come with acceptance of who they are and who they have become.

White said he accepts the fact that he will not be able to walk again only three years after his accident happened.

“You move on, get on with life and quit feeling sorry for yourself,” White said.

“You can either try your best and make the best of a bad situation, or you can go down the other route,” Piazza said. “But you have the choice to do it either way.”

Family and friends are a main influence on all three men, and they said it is their self-determination that defines who they are today.