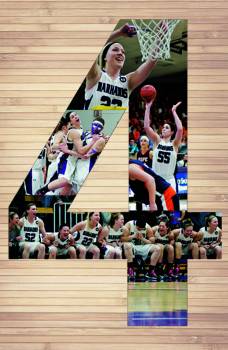 Asphyxiating defense, vicious rebounding and tightknit chemistry has led the Warhawks women’s basketball team to focus their crosshairs on a national championship.

Head coach Keri Carollo was still smiling after cutting down the nets.

“It’s pretty awesome,” Carollo said. “We’re excited; they delivered. These guys believed that they could do it. They were undersized, maybe outmatched in a couple positions, but they believed in themselves and believed in each other. Just an unbelievable performance.”

Unbelievable is a word that has surfaced nationwide in regards to the ’Hawks’ run.

While only ranked No. 22, the ’Hawks have now won 14 of 15. The lone loss came in overtime against UW-Stevens Point in the WIAC Championship game. The ’Hawks had beaten the Pointers twice prior to the meeting.

On Friday, the ’Hawks knocked off the Storm, 76-63. Storm senior forward Kate Nielsen, a player of the year candidate, was held in check, despite scoring 28 points and grabbing 12 rebounds.

After a shaky start in the opening minutes Saturday night, the ’Hawks dominated the first half against the Lady Dutch, leading 30-12 at the 8:47 mark.

Despite a 14-4 run by the Lady Dutch, the ’Hawks managed to score the last five points of the half to lead, 39-26, at halftime.

The ’Hawks continued to hold onto their lead for the rest of the game but faced a late push by the Lady Dutch.

With 4:16 to play, the ’Hawks’ lead was cut to 58-56. Tough defense stifled the next two possessions, but with 2:21 left, junior guard Mary Merg buried a three pointer to give the ’Hawks a five point advantage and eventually the game.

Merg sported the rest of the net as a necklace while talking about her ability to knock down big shots.

“I just don’t think about it,” Merg said. “I just shoot, and that’s my mentality. I don’t look at the scoreboard or anything. If I’m open, I’m going to shoot it. I have confidence in myself, and I think my teammates trust me.”

Merg struggled to put the Final Four run into words.

“I think words can’t describe it,” she said. “All of us girls, growing up, this is what you play for.”

It’s not just a Final Four the ’Hawks have been playing for this season.

Alex Scarbro, who played on last year’s team, passed away Nov. 24. A devastating loss, the team vowed to play the rest of the season in Scarbro’s honor.

“Very special,” Merg said when asked about making the Final Four run during a season the team dedicated to Scarbro. “We just feel her presence here; she’s with us. Some of the shots I make, I thank her. It’s great we made it this far for her.”

The last time the ’Hawks went to the Final Four was 2008. That year, the ’Hawks took third place. Carollo said she does not see many similarities between the ’08 team and her current squad but hopes she can get a different result this time around.

“Absolutely,” Carollo said when asked if she thinks this year’s team could get a different result.

“This group definitely has a little angel on their shoulder, no doubt. Every day we go to practice, every day we touch the court. I know that she’s looking out for us and it’s special. That doesn’t happen every day to become a part of a special group. They have a special chemistry that I’ve never been a part of.”

The ’Hawks will now travel to Holland, Mich., the home of their most recent opponent, and face the No. 6 Amherst College Lord Jeffs (30-1) on Friday.This is the fifth straight Final Four for the Jeffs. The remaining teams in the tournament are No. 1-ranked DePauw University (32-0) and No. 15 Williams College (23-6). The ’Hawks and Jeffs tipoff at 4:30 p.m. CST Friday.