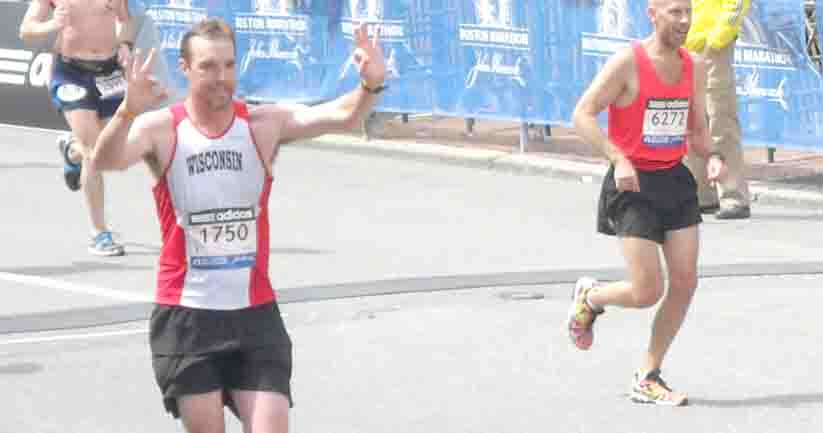 As he slowly sipped a cold beer in the famous Boston bar, Cheers, on Monday afternoon, UW-Whitewater senior Griffin Schroeder let his muscles relax. Just hours before, he had crossed the finish line of the Boston Marathon and his body was tired from the stress that running 26.2 miles in three hours and 11 minutes had put on it.

But a glance at one of the bar’s televisions caused Schroeder’s muscles to tense up again.

Schroeder learned that two explosions had gone off just a mile away from the famous bar, at the very same finish line he had crossed, and that people were hurt. The bombs killed three people and injured 144 others.

After leaving the bar, a glance south showed Schroeder and his fiancé groups of people heading north, away from the wreckage.

Although safe and headed to a safer location, Schroeder and his fiancé were confused as to how a place they had been just hours before was now filled with emergency personnel rescuing victims like it was a warzone.

“My first thought when I saw the TV was, ‘What happened?’” Schroeder said. “It happened at the finish line and it didn’t make sense because I was just there. That was my first thought, ‘How could this have happened and what’s going on?’”

A news helicopter hovered over the smoky scene. The couple headed north, trying to call loved ones to let them know they were okay. Due to heavy cell phone usage in the area, the two were unable to contact family and friends.

“We couldn’t get a hold of anybody, really,” Schroeder said. “I eventually did go somewhere I could get reception, but then my phone died. As we continued to walk north we saw TVs on and got updates from that and we just kept thinking ,‘What the heck?’ It was crazy.”

Schroeder had run the Boston Marathon twice previously and has also participated in marathons in Milwaukee, Green Bay, Madison, Chicago, New York City and Disney World in Orlando. It was his 13th marathon.

Athletic Director Paul Plinske, who had a sister-in-law participating in the race, was in disbelief when he learned the news.

“I received the text and just about dropped the phone,” he said.

Not long after receiving the news that the two bombs had detonated, Plinske learned through a source that his sister-in-law was safe in her hotel. Shortly after that, he learned that Schroeder, whom Plinske knows well, was also safe.

Plinske has participated in over a dozen marathons and ran in the Boston Marathon in 2002.

“It’s pretty evident that runners are a collective group of people who share the same passion,” Plinske said. “They obviously have a great passion for the sport, but also for living life to the fullest.”

Schroeder also confirmed the tight-knit community that runners have. While eating dinner Monday night, Schroeder and his fiancé spoke to numerous marathon participants. They asked each other where they were when the bombs went off, if they were okay, and of course, what time they finished the race in.

But Schroeder also said he saw heart-wrenching evidence from the day, despite being a mile from the blasts. As he and his fiancé made the trek north from Cheers toward their hotel, ambulances, fire trucks and a bomb squad whipped past toward the scene.

Schroeder described one man, who was overwhelmed by the day’s events.

“People were shocked,” he said. “They were devastated. I saw one guy, he had this look—I don’t think I’ll ever forget it. He had tears in his eyes. He was shocked and didn’t know what to do. All I did was pat him on the back and told him it was OK.”

Schroeder said it is unclear when he will return to Wisconsin, as he and his fiancé have tickets to see Boston Celtics and Boston Bruins games in the coming days, but is not sure if they will be postponed.

As the smoke clears and America heals, Schroeder considers himself lucky. Despite finishing slower than he had hoped, he was saddened by the devastation that had scorched the sanctity of a pure and celebratory event.

“One of my favorite things about the Boston Marathon is not the race itself, but the people in it,” he said. “They take great pride in it.”