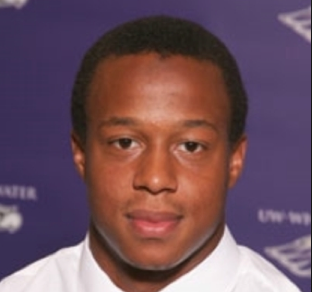 “There’s an old saying, ‘To whom much is given, much is expected,” Walworth County Judge Phillip Koss said.

Koss followed a joint recommendation from the prosecution and defense in sentencing Coppage, a former running back for the Warhawks.

Koss said he struggled to agree with the recommendation.

“I not sure I was going to grant this. This isn’t just casual use,” Koss said. “I’ve often seen people who engage in athletics–especially at an elite level as you have–who have an expectation that things will be good and easy for them.

“Your gifts won’t get you off; more should be expected rather than less. We don’t cut you slack because you’re a good athlete. I don’t care,” Koss said.

“I think that goes a long way, and that’s who I am, not what you see on paper,” Coppage said.

According to the criminal complaint, a confidential informant bought 61.4 grams of marijuana from Coppage over four controlled buys in Whitewater. In the same month, police found marijuana, a marijuana grinder and a glass pipe in Coppage’s backpack during a traffic stop.

As part of the plea agreement, one felony count and the two misdemeanor charges were dropped but still considered in sentencing.

Additional terms of the agreement include $500 in fines plus court costs, 80 hours of community service over two years, no alcohol or controlled substances and alcohol and other drug abuse assessment and compliance. If all the conditions are met without additional legal problems, the case will be expunged from Coppage’s record.

The only disagreement in the sentencing hearing came from Pecora, who asked that Coppage be allowed to start his jail term Sept. 15, after he moved to his new residence and finalized his enrollment at UW-Whitewater.

“I don’t know why he shouldn’t go today,” Koss said. “I realize that probably wasn’t a realistic expectation, but he should have his affairs in order. This date has been set for quite a long period of time.”

Pecora noted that Coppage had gone beyond what Pecora had advised, logging 30 hours of community service to be subtracted from his sentence. Necci stated the evidence since the arrest shows that Coppage has been “doing a good job” and he was “impressed with Coppage’s personal growth.”

Koss ended the hearing with advice for Coppage.

“Mr. Coppage, my lecture will do nothing, it will all be up to you,” Koss said. “If you’re going to succeed in life, you have graciously gotten the tools to do that today.”