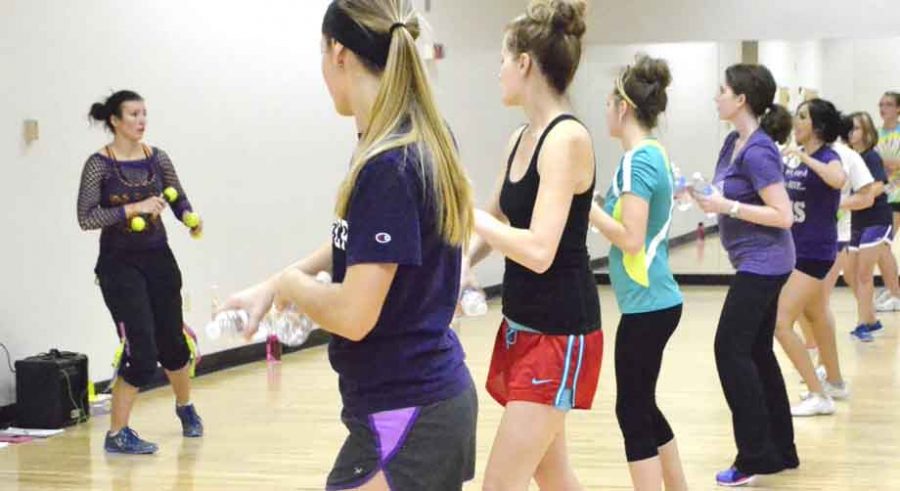 Kristina Hamm, left, leads a Zumba with Warhawks meeting on Oct. 9. Hamm is a certified Zumba instructor and leads the student organization from 7 to 8 p.m. every Wednesday in the Kachel Center in Young Auditorium.

Enter the Kachel Center studio on a Wednesday night and you will hear the rhythm of pulsing music and see a room full of dancers following the intricate steps of Zumba.

Kristina Hamm is a senior studying accounting at University of Wisconsin-Whitewater. Besides her passion for numbers, Hamm also is a passionate Zumba instructor and shares her expertise as the instructor for Zumba with Warhawks.

“The numbers give me headaches, but being able to go to Zumba once a week and just shake it off, that’s what I love,” Hamm said.

Zumba with Warhawks officially started in fall 2012, but starting the group did not come easily. At first, the university did not agree to start the organization because they believed they would be liable if any students were injured during the meetings. Hamm was ready with her own liability insurance, but that was not the only problem she had.

At first, Hamm wanted Zumba to be offered as a fitness class through UW-W, but the university resisted. Hamm said she thinks one reason was because if it was offered as a class, it would become a phenomenon and would give students one more option with their limited membership.

Another reason the university resisted was that Hamm was only qualified to be a Zumba instructor and she would not be able to instruct any other fitness classes.

“They wanted well-rounded people who could teach Zumba but also teach the yoga class in case they needed to fill in, but I just know Zumba,” Hamm said.

Hamm said she spent a fortune to train to be an instructor and now owns five different Zumba licenses targeting different types of Zumba. She does not get paid and said she does not want anything in return, only for Zumba to be available to everyone interested in joining.

Regardless of the difficulties of making the organization official, Zumba with Warhawks has become a popular alternative for exercising outside of the weight room.

Sophomore Hayley Remmel is the secretary of Zumba with Warhawks. Along with other obligations as the secretary, she also contributes to promoting for the organization.

“Many people feel intimidated by trying new things by themselves,” Remmel said. “When it’s free and you know you can bring your friends along to try new things, it’s a different experience.”

Senior Alyssa Kubishak utilizes her love for dancing at Zumba once a week.

“I love dancing, so it’s an excuse to dance and exercise along the way,” Kubishak said. “It’s a great way to meet new people.”

Zumba with Warhawks hosts many fundraising events during the academic year. Annual charity events such as Party in Pink Zumbathon raise money and awareness for causes like breast cancer. The group also does events to benefit Treyton Kilar’s Field of Dreams, which usually is held in April at the Whitewater High School.

Treyton Kilar was a 6-year-old boy who was killed in a car accident by a drunk driver in September 2010. His family and the Whitewater community have been raising money to build a youth baseball field in Treyton’s memory.

“I personally know the Kilar family through working with his dad at the bank. The accident touched everyone,” Hamm said.

Remmel and Hamm stressed the purpose of the organization is to have fun and enjoy the moment while burning calories. Though Zumba may seem like a “woman’s workout only,” Zumba with Warhawks is created for everyone who is interested in the activity regardless of any previous experiences, genders and age.

“I’m not that person to go to the gym to work out,” Remmel said. “I’m that goof ball that dances around in my room for a workout.”

The organization provides students the opportunity to try out Zumba for free on the first night of every semester. The membership fee is $25 per semester or a $3 drop-in fee for anyone who is not able to attend regularly due to other commitments.

The money goes toward charities, an occasional disc jockey and training for members who would like to become Zumba instructors when Hamm graduates.

Zumba with Warhawks is held from 7 to 8 p.m. every Tuesday in Kachel Center located in the Young Auditorium.