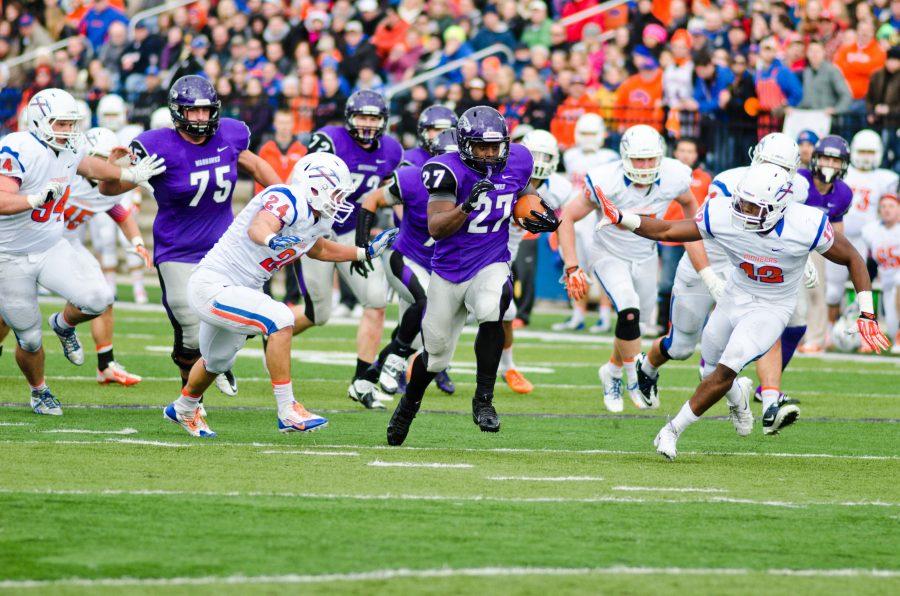 UW-Platteville’s high-powered offense was outmatched by the Warhawks’ shutdown defense Saturday, as the two undefeated top-ten teams battled for WIAC supremacy in front of a Homecoming crowd of 12,028.

By winning on the road against UW-Oshkosh the previous week and staying undefeated by triumphing over the Pioneers, 35-16, the ’Hawks captured the top spot in the WIAC. UW-Oshkosh and UW-Platteville have yet to face each other this season, so the ’Hawks’ only job now is to win one of their two remaining games in order to lock down the WIAC title.

“We do control some things now,” head coach Lance Leipold said. “We want to win the conference championship, and it’s for us to go get.”

The eighth-ranked Pioneers came into the matchup averaging more than 500 yards and 40 points per game, but the sixth-ranked ’Hawks held them to a season-low 271 yards, while keeping them 30 points under their season average.

“I know they’re ranked sixth in the nation, but that’s only because they weren’t on the radar last year,” UW-Platteville head coach Mike Emendorfer said of the ’Hawks. “They should be No. 2 in the nation. I think they’re that good.”

After a rocky 9-0 start by the Pioneers, the ’Hawks’ defense, ranked No. 2 in NCAA Division-III scoring statistics, handed the conference foes their first loss of the year and caused five turnovers, the most given up by the Pioneers this season.

Four of the five were interceptions off the reigning WIAC player of the week; UW-Platteville’s John Kelly. Kelly went 24 for 50 with 256 yards, but was not able to find a consistent rhythm, thanks to the ’Hawks’ ever-changing defensive schemes.

“You can’t just sit in one thing with an experienced quarterback, and that’s the system they have,” Leipold said. “So by bringing different looks, we could bring some pressure and get to him quickly, and that was going to be the key part of the game.”

The other key part of the game was turnovers. While the ’Hawks forced five turnovers on the offensive powerhouse, they also committed two of their own.

On the opening drive of the game, senior quarterback Matt Behrendt found junior wide receiver Jake Kumerow inside the five-yard line from the 15. While fighting for the end zone, Kumerow fumbled the ball, while sustaining a hip injury, and Platteville’s defensive back Rob Austin capitalized on the Warhawk mishap.

The next drive for the ’Hawks also resulted in a turnover, as Behrendt threw his first interception of the season to Pioneers defensive back Jason Flagg, who returned the ball 70 yards for a touchdown.

This swing in momentum ended Behrendt’s streak of 226 throws without a pick.

“I had to flush it, so I’m not worried about it,” Behrendt said. “I knew it was going to happen at some point.”

Despite the two setbacks, the ’Hawks dominated the remainder of the game.

Behrendt went 24 for 33 with 193 yards on the day with four touchdown passes, three of which were thrown to sophomore Joe Worth. Worth became Behrendt’s go-to man by the end of the game, due to Kumerow’s and senior wide receiver Tyler Huber’s injuries.

Jordan Ratliffe racked up a season-high 175 yards, marking his third game this season with more than 100 yards rushing. Senior linebacker Josh Williams led the ’Hawks defensively, recording seven tackles, one sack, one tackle for a loss of yards and one interception.

Sophomore defensive back Ryan Winske made two interceptions of his own, leading the ’Hawks in recovered turnovers.

“This team has some uniqueness to it that I really like,” Leipold said. “What I’m excited about is watching young players, watching the Jordan Ratliffe’s emerge, watching the Booker Ross’s do stuff, Ryan Winske wasn’t on the roster last year; he makes two interceptions. That’s what’s making this thing fun right now.”

After losing to the UW-Stevens Point in last year’s matchup, Leipold said he is determined to do everything in his power from a coaching standpoint to set the ’Hawks up for victory next week as they travel to face the Pointers.

Coming off two tough conference challenges back-to-back, Leipold said he has been stressing the notion of taking it one week at a time, not allowing the players to get ahead of themselves; however, their win-streak might be what it takes to energize and motive the players to finish the season strong.

“The theme of the whole week was to make sure that we’re in control of our own destiny,” senior linebacker Cole Klotz said. “Last year, it was kind of a struggle for us all. So it’s great for this team. I haven’t been a part of a team who has come together like we have in the past weeks.”

Saturday’s kickoff is at 1 p.m. at  Goerke Field in Stvens Point.