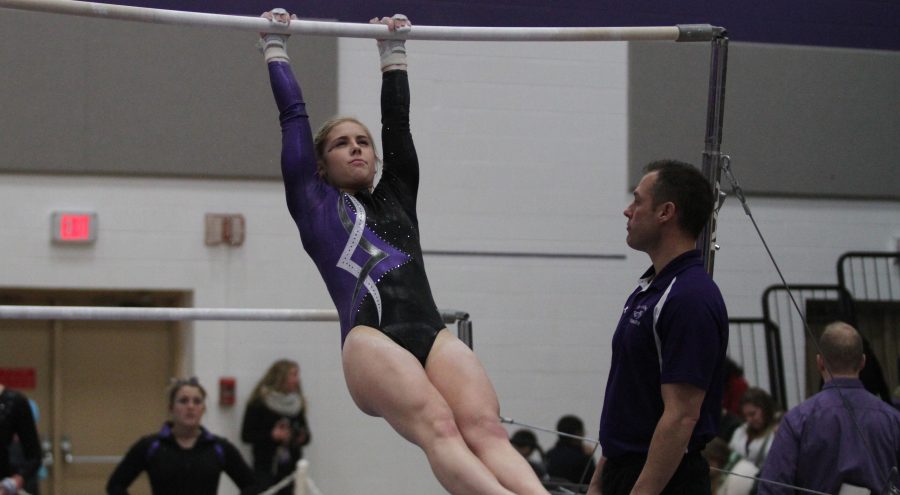 The Warhawks gymnastics team looks to continue its success from the last two years after winning back-to-back national championships.

Despite losing 2013 National Athlete of the Year Katie Thompson to graduation, junior Jen McKiernan said the team will do well this year.  In addition to losing Thompson, they lost Morgan Hadley, Mary Kate Young, Annie Mix, and Siri Wischmann to graduation as well.

“We have a really talented group of girls with a lot of potential,” McKiernan said. “We have been improving at every meet so far and help out the team.  We brought in a lot of talented freshmen that are really stepping up to fill the spots of the seniors we lost.”

Junior Cici Talcott said as they enter the season, they aren’t trying to think about the chance of a three-peat, despite the fact they have a talented team this year.

“There are so many girls that are hard workers and are very talented,” Talcott said. “With that said, we are not really thinking about nationals yet because we like to take one meet at a time and remind ourselves that this is a new season with a new team.”

“Our expectations for the season are to take one week at a time and to continue to improve each week; that is more important,” head coach Jennifer Regan said.  “Every year we talk about replacing who has graduated.  It’s all about others in our lineup stepping up.   That is why it is so important to continue to get the team as much experience during the season competing. Everyone is a key contributor.”

Freshman Kelsea Fischer posted a 9.5 and also shared first-place honors, while another freshman, Courtney Pickett, finished fifth with a 9.35. On the balance beam, Shackleton was the top Warhawk with a score of 9.55.

In their second meet of the season at Winona State, the Warhawks finished first in the three-team tournament with a team score of 183.55. The ’Hawks grabbed the first four spots on the bars, as Dieringer led the way with a 9.525.

Freshman McKenzie Foster had a first-place finish on the floor with a 9.45 and was the top all-arounder with a 37.425 in the four events combined.  The Warhawks’ best event was the bars, in which they finished with a team total of 46.475, tied for the eighth-best score in school history.

“Our first meet went well but not as good as we can be,” Talcott said. “We got our first-meet jitters out of the way and pulled through with a win at our second meet.  I was really proud of the team, and I can’t wait to see where we will go this year because we are truly driven.”

The Warhawks’ third meet was on Jan. 19 in St. Paul, Minn., as they won first place in the Hamline University Triangular with a score of 184.6, including a fourth-best team score of 47.125 on the uneven bars. The top six spots in the uneven bars were filled by the ’Hawks, led by Talcott (9.5).

Foster also had a second-place finish in the all-around competition , combining performances on all four apparatus for a 35.525 score.  Dieringer was the top finisher on the floor routines scoring a 9.6 in that event.

“It was a good weekend for us,” Regan said.  “It was good to see the team improve from the week before. We saw a lot of cheering and support from the team. The weekend showed a lot of growth with their performance and overall development of the team.”

This past Saturday, the ’Hawks hosted UW-Stout and won the meet 187.075 to 179.6.  The victory was showcased with a school record on the uneven bars where Pickett, Quinn, Dieringer, Talcott and Love combined for a 48.025.

Freshman Katie Fiorilli put the final touches on the win with the top honors in the all-around competition with a score of 37.2.

“The girls did great,” Regan said.  “They broke the school record on the bars. [I’m] very proud of all the hard work my assistant coach Ryan Bendixen put in with the team on that event.”
The Warhawks’ next opponents are Southeast Missouri and Lindenwood at 6:30 p.m. on Jan. 31 in Cape Girardeau, Mo.