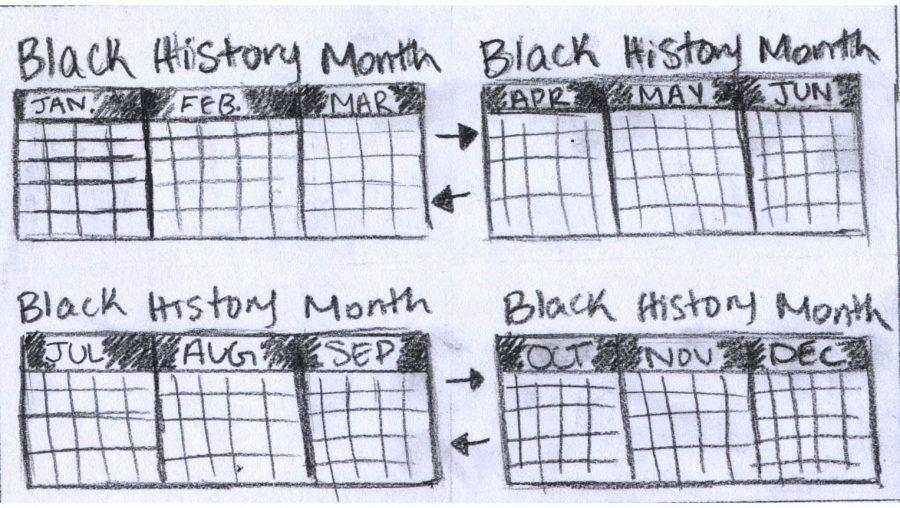 Black History Month is supposed to be a time for people to celebrate the rich history and culture of black Americans, and to educate people on that subject.
But there is one major problem with the concept of “Black History Month”: by restricting an entire race’s history to one month, this goal is unachievable. Until people celebrate black history as American history, this objective will remain untouched.
In 1926, the Association for the Study of Negro Life and History announced it would begin celebrating Negro History Week.
Carter G. Woodson pitched the idea to interest people in the rich history of black culture.
Woodson’s goal was to spread the knowledge of the black culture and history as far as he possibly could, so black people would become more vocal in showing pride of their history and be able to share that information to even more people.
On the celebration’s 50th anniversary in 1976, it was expanded to an entire month, and since then, every president has endorsed the holiday.
Expanding the time to celebrate black history needs to happen again. When societal leaders acknowledged that black history and culture were too rich to confine to one week, the designation was expanded to a month. Currently, black history is expanding even more and deserves to be celebrated every day of the year.
By relegating celebration of an entire segment of our country’s history to one month, we drive a wedge into society.
This is not to say that black culture and history do not deserve to be celebrated. Many black figures have played enormous roles in American history.
Crispus Attucks, for example, is widely considered to be one of the first people to die for the cause of American freedom leading up to the Revolutionary War. He was one of the Americans killed in the Boston Massacre, according to the Crispus Attucks Foundation website.
Dr. Charles Richard Drew was a doctor and surgeon who created the idea of blood banks, which saves the lives of 41,000 Americans per day, according to the American Red Cross.
With these prominent historical figures and others such as Rev. Dr. Martin Luther King Jr., Jackie Robinson, President Barack Obama and Frederick Douglass, it is obvious black history and culture deserve to be taught and celebrated. This celebration is too vast to be confined to a single month, let alone the shortest month of the year.
To try to confine all of that history to one month is to teach an incomplete version of an entire culture’s history, which is a travesty. Without a proper education and celebration of a large portion of American history, many important moments and events can be left out and forgotten.
For instance, everyone knows about the civil rights movement and the brave marches led by King Jr. and others, but do people remember the four all-black regiments that fought for America in World War I?
Everyone knows about the invention of the lightbulb by Thomas Edison, but how many people remember the invention of the carbon filament that allowed it to burn for increased lengths of time by black inventor Lewis Howard Latimer?
Until black history starts being celebrated as our American history, some of these facts may remain under-taught.
This celebration should be an everyday occurrence. The day the Voting Rights Act of 1965 passed should be celebrated as much as the day the Declaration of Independence was signed.
The day the 13th Amendment was passed should be celebrated as much as the day the Bill of Rights was passed.
Until then, the goal of Black History Month will continue to fall short of its purpose.