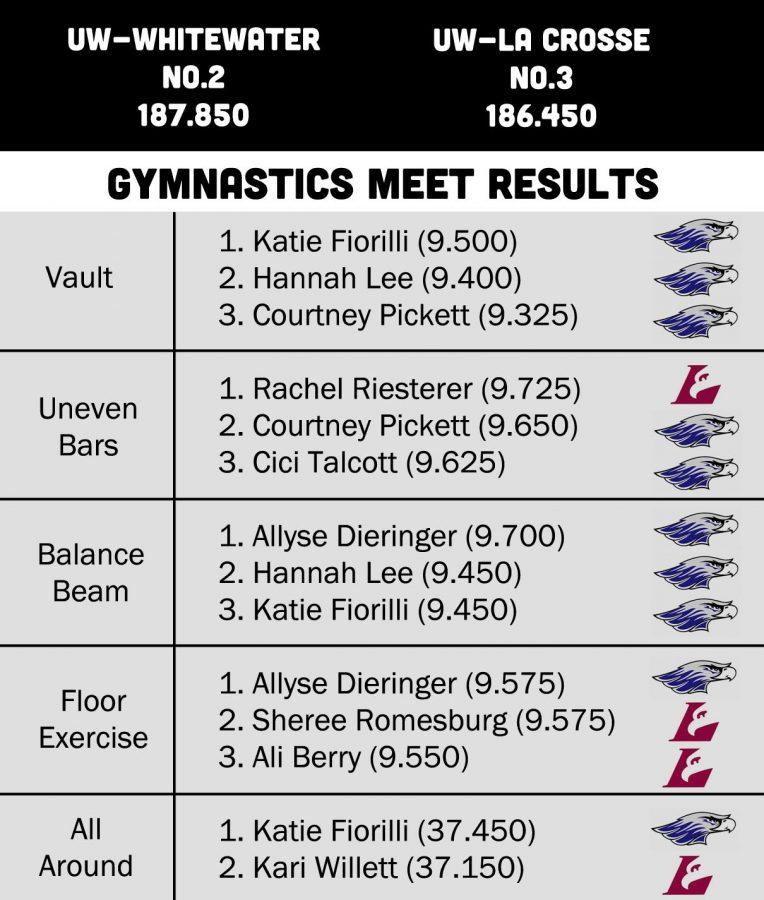 UW-Whitewater’s gymnastics team may not have broken a school record in its past meet on Feb. 7, but it did come away from Milwaukee with a 187.850-186.450 win against the UW-La Crosse Eagles.

Two weeks ago, the Warhawks scored a school record total of 191.075, scoring higher than Lindenwood, a Division-II school, and placed second in the meet behind D-I Southeast Missouri State.

Against the No. 3-ranked Eagles, according to usagym.org, head coach Jennifer Regan said the team had big holes to fill because of players graduating from last year’s team.

“The entire team, including the freshmen, have stepped up to that challenge,” Regan said. “I’m happy with where we’re at, but I feel like we still have a lot more to offer.”

The ’Hawks, ranked No. 2 in the country, started out the meet on the vault. Regan’s team set the tone early, taking the top three spots in the event with freshman Katie Fiorilli leading the way, scoring a 9.5.

Sophomore Hannah Lee followed with a 9.4 while another freshman, Courtney Pickett, took third with a 9.325. Fiorilli said she was pleased overall with her performance.

“That was the first time I’ve ever twisted on the vault and completed it this season,” Fiorilli said.

Next in the meet came the uneven bars, where the Eagles earned their lone first-place finish of the competition. UW-La Crosse’s Rachel Riesterer topped the field with a 9.725 while the Warhawks’ Pickett and junior Cici Talcott took second and third, scoring 9.65 and 9.625 respectively.

The third event marked the balance beam, where senior Allyse Dieringer put together a top-ten performance in the school record books, scoring a 9.7. Dieringer was followed by two fellow ’Hawks and Eagles who each tied for second place.

Heading into the floor exercise, the team led the Eagles by just more than a point. Between Dieringer’s 9.575, which tied for first, and Talcott’s 9.525, the Warhawks were able to maintain its slim lead, holding on for the victory.

Fiorilli added points for the ’Hawks in each of the four events and won the all-around competition in the meet, totaling 37.450. The meet against the Eagles marked the second time in the last three meets in which Fiorilli took home top honors in the all-around.

“I wasn’t expecting it, but I knew [all the success] could happen if I worked hard for it,” Fiorilli said. “We’re going to have to work just as hard to get another win next week. We never take any breaks, and we know that nothing’s ever handed to us.”

Next up, the ’Hawks host a matchup against the No. 1-ranked team in the country, Brockport State from New York. The meet will be held at 7 p.m. on Feb. 14 in the Kris Russell Volleyball Arena.

“We’ve had some injuries, so we’re looking to get those kids back in the lineup these next couple weeks,” Regan said. “When we’re competing against a team ranked right behind us in UW-La Crosse and next week a team ranked right in front of us, you have to bring your ‘A’ game.”