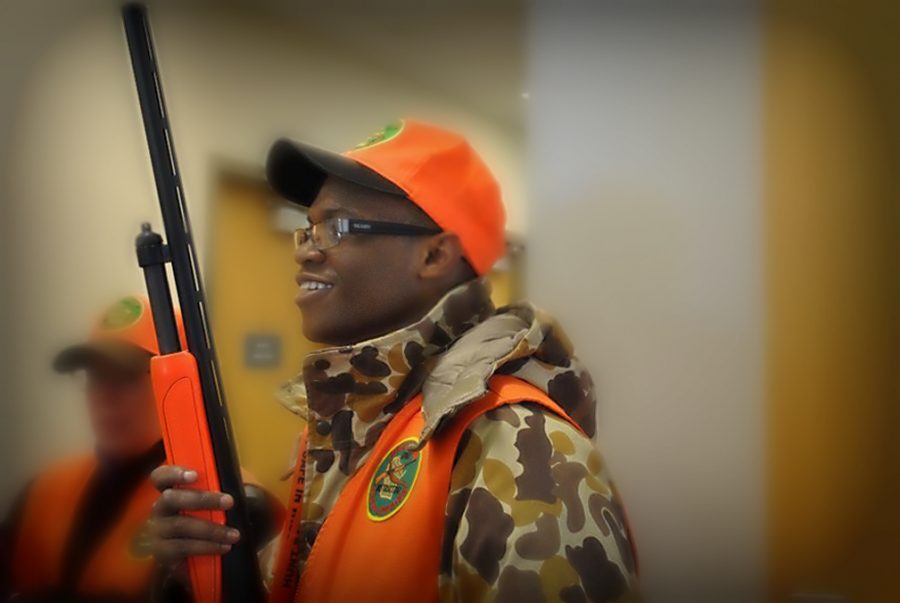 Offering students the chance to learn a safe way to experience a part of Wisconsin’s culture is a key goal of one of UW-Whitewater’s newest clubs.

Uniting inexperienced hunters with veteran hunters is how the U Dub Dub Hunting Club plans to teach prospective hunters, according to Amani Lindsey, vice president of the club.

“The U Dub Dub Hunting Club, abbreviated UDDHC, is not just really a hunting club, it’s basically an umbrella for all hunting activities,” Lindsey said. “Our whole thing is to bridge a connection between hunters and those who want to become hunters, or at least want to experience the lifestyle.”

Every year, thousands of Wisconsin residents and non-residents venture into the forests of the state to hunt. More than 600,000 licenses were sold in 2013, according to the Department of Natural Resources’ website. Of those, nearly 27,000 were First Time Buyer Licenses, sold to men, women and youths who have never owned a hunting license before.

The UDDHC will work with the DNR to organize events called “learn to hunt.”

“Learn to hunt events combine classroom instruction and field work before a novice goes hunting with an experienced hunter. They are a great way to introduce someone new to Wisconsin’s hunting heritage,” according to the DNR website.

The site gave a listing of different dates and locations for learning to hunt turkey, pheasant, small game, raccoon and quail, as well as links to bear hunting and deer hunting.

When there is no open hunting season, the club plans on teaching its members various skills, such as creating a campfire or cooking the meat they hunted.

Other events they plan on hosting include archery competition and trap shooting, which is shooting a clay “pigeon” that has been launched from a machine into the air. The McMiller Sports Center in Eagle, Wis., provides a public shooting range which the UDDHC uses for such events.

Lindsey also said the club wishes to reach out to minority groups and international students to encourage them to get involved.

“That’s what college is all about: exposure,” Lindsey said. “Getting out of your comfort zone and experiencing something new.”

Hunter’s Safety, a class required for all hunters, is required for all new club members before they can hunt. Lindsey said the club plans to assist its members to find and attend one of these classes. The club also will provide hunting equipment for those who do not have any.

It is illegal to carry firearms anywhere on campus, so the UW-Whitewater Police Services, located in Goodhue Hall, have a vault specifically to hold hunters’ firearms while they are on campus. The UDDHC stores its guns there.

Officer Kelsey Kersten of the UW-Whitewater Police Services, said hunters can, at any time, deposit or withdraw their firearms at the office. The office is open 24 hours a day, seven days a week. Bows, crossbows and paintball guns also can be deposited there.

Kersten said each time someone wishes to retrieve their firearm from the police office, they must present proof of their identity, and the office will run a background check for warrants.

The UDDHC will meet every week at 6:30 p.m. on Thursdays in Hyland Hall, room 1305. The annual membership fee is $15, according to the UDDHC’s bylaws. Lindsey said for the spring semester, membership is currently free in order to build numbers.

Anyone with questions about the club can contact Lindsey at [email protected] Lindsey encourages students to check out the club’s Facebook page, U Dub Dub Hunting Club, at facebook.com/udubhunting.

“We want to share that tradition,” Lindsey said. “That Wisconsin tradition. It’s a big part of our culture.”