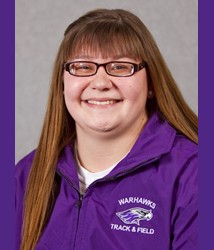 Hosting the Indoor Championships, the UW-Whitewater men’s and women’s track and field teams took on the elite competition of the WIAC last weekend in the Kachel Fieldhouse.

Track and field powerhouse UW-La Crosse finished atop the standings for both the men and women. For the men, UW-Eau Claire finished second, followed by UW-Oshkosh in third. On the women’s side, UW-Oshkosh came in second.

Coach Mike Johnson said he believed it was a successful weekend for the Warhawks. The ’Hawks broke five school records between the men and women.

“We obviously have a great conference to be in,” Johnson said. “To be where we finished in our league and then how that ranks nationally is still pretty [impressive] and even though we might not have placed as high as we thought, we still had a good weekend.”

Standing on top of the podium for the Warhawks, the men were led by junior Justin Bowers, capturing the long jump title with a first-place leap of 23-10.25.

Going into the Indoor Championships, Bowers was set on putting up a season-best mark and adding points for the ’Hawks.

He did just that, topping his previous season-high by 5.75 in.

“I was excited,” Bowers said. “I wasn’t really worried about winning, I just wanted to score points for my team. I don’t wanna say it was unreal, but I didn’t expect it.”

Bowers’ jump was the second-furthest distance posted in Division-III this season.

Senior Corey Zaeske added a second-place finish in the high jump with a height of 6-9.5. He technically had the same height as the winner but took second due to the number of jumps.

Leading the way in the 60-meter dash, sophomore Corey Broussard finished in second with a school-record time of 6.82. His time also was the fourth-fastest in D-III this season.

In the 200-meter dash, junior Dylan Crafton finished in second, clocking in at 22.02, good for seventh nationally.

In the 4×200-meter relay, the Warhawks’ team of Bryce Rudebeck, Jared Denu, Daniel Freiberg and Alex Tassoul combined to finish second with a time of 1:29.51.

Rounding out the top point scorers for UW-W, the Denu, Rudebeck duo joined freshman Alex Sharrock and D.Q. Wynn-Smith in the 4×400 to finish third with a time of 3:20.43.

On the women’s side, the Warhawks were led by two historic performances from junior Lexie Sondgeroth. Clocking in at 24.70, Sondgeroth set a WIAC meet record, facility record, school record and posted the best time in D-III this season in the 200-meter dash.

Sondgeroth set another WIAC meet record, capturing the long jump title. Her leap of 19-10.25 also is the best distance posted in D-III this season.

With another first-place finish for the ’Hawks, junior Shelby Mahr tossed the weight throw a distance of 59-0.75, winning on her first throw of the day.

“I don’t know if it has really set in yet,” Mahr said. “But it was definitely awesome, and my teammates were there for me the entire weekend.”

Mahr also added a third-place finish in the shot put with a heave of 46-1.5.

Wrapping up the top scorers on the women’s side, senior Melanie Pilon added a second-place finish in the pole vault, reaching a heigh of 11-7.

The Warhawks have secured a number of national qualifiers and are looking to add to the total heading into the Last Chance meet this weekend in Stevens Point. The Last Chance meet gives those who haven’t already qualified for nationals one more shot to take the trip to Lincoln, Neb.

The 2014 NCAA D-III Indoor Track and Field Championships, hosted by Nebraska Wesleyan, are scheduled for March 14-15 in Lincoln, Neb.