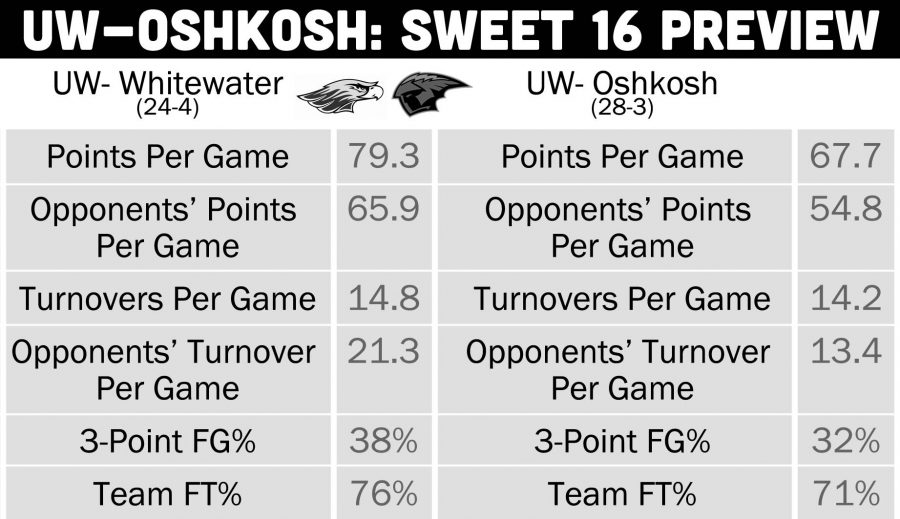 For some teams, hitting the road can be seen as a burden. For the UW-Whitewater women’s basketball team, playing in opposing teams’ gyms seems to be just another challenge the Warhawks embrace.

“It feels like more of a tournament when we travel,” senior guard Mary Merg said. “We can play anywhere and we’ll bring our ‘A’ game. Our main goal is to just have fun out there, especially for the eight seniors.”

The first round of the NCAA Tournament got underway on March 7, and the ’Hawks saw themselves in a back-and-forth battle with the Concordia-Moorhead Cobbers (21-5).

Two of the top three rebounders for the Cobbers stood over six feet tall.

The top rebounder and shot blocker, Alexandra Lippert, is 6-foot-4. Warhawks head coach Keri Carollo said she knew Lippert would make an impact on the game one way or another.

“That’s the biggest team we’ve seen all year,” Carollo said. “Our posts around the rim were always kind of second-guessing whether or not they should shoot or would have to shot-fake first. They kind of looked over their shoulder to make sure she [Lippert] wasn’t sneaking up behind them, but I thought we did a really good job handling it even though we hadn’t really seen that all year.”

The ’Hawks defeated the Cobbers, 79-72, with an all-around effort in the scoring column.

Five players ended with double-figures, and even though the Cobbers out-shot Carollo’s team, the 24 turnovers the Warhawks forced proved to be too much in the end.

The Cobbers’ biggest lead was nine points at 52-43, but the ’Hawks’ 10-12 shooting from the free-throw line at the end of the game sealed the opposition’s fate.

With the win, Carollo became the all-time winningest women’s basketball coach in UW-Whitewater history. She passed Diane Jones and currently possesses an overall record of 231-106.

The next night, in the round of 32, the Warhawks faced the host team of the first two rounds, the St. Thomas Tommies (25-4).

The Tommies entered the tournament as winners of the Minnesota Intercollegiate Athletic Conference postseason tournament and did not sneak up on Carollo’s radar.

“St. Thomas is a really good team,” Carollo said. “They have really good post play, and this was one of the most fun games I’ve ever been a part of because both teams made plays down the stretch and stepping up, taking big shots.”

Another see-saw battle took place in the first half between the Tommies and Warhawks, as there were nine ties and six lead changes in the first 20 minutes of play.

Merg led the team in a number of categories, finishing with 22 points, eight assists and seven rebounds, while going a perfect 9-of-9 from the free-throw line.

Senior center Kristen Ruchti has been able to give the Warhawks life off the bench during the second half of the season.

Against the Tommies, Ruchti gave more than just a lift, as she poured in a season-high 25 points on 12-of-15 shooting and grabbed seven rebounds in the ’Hawks’ 87-78 victory.

“She [Ruchti] gives us a spark off the bench and that’s crucial,” Merg said. “I couldn’t be more proud of her. This was the perfect time to score 25 points against a really good St. Thomas team that have a good four and a really good five. She just brought her game. It’s a very nice luxury to have.”

Next up for the Warhawks is a familiar foe from the WIAC in UW-Oshkosh (26-3).

The Warhawks and Titans have met twice previously this season and the ’Hawks won both matchups, with the latest coming on Feb. 15 in Oshkosh ending in a 64-46 victory.

“It is always challenging to beat a team three times,” Merg said. “But we’re aware of their ability. I think we’re in a good mindset right now, and we have confidence going into this game.”

The battle between the two remaining WIAC teams will take place March 14 in Greencastle, Ind.

Greencastle marks the home of the DePauw Tigers (29-1), who received the right to host the Sweet 16 and Elite Eight games from the NCAA on March 9.

The Tigers face the Carthage Lady Reds (26-3), and the winners between the two games face off March 15.

In the second round of last year’s NCAA Tournament, the ’Hawks topped the Lady Reds 71-51.

“The most important thing for all of us is to win on Friday,” Carollo said. “We’re playing well on the road right now, so I’m pretty excited for our opportunity.”