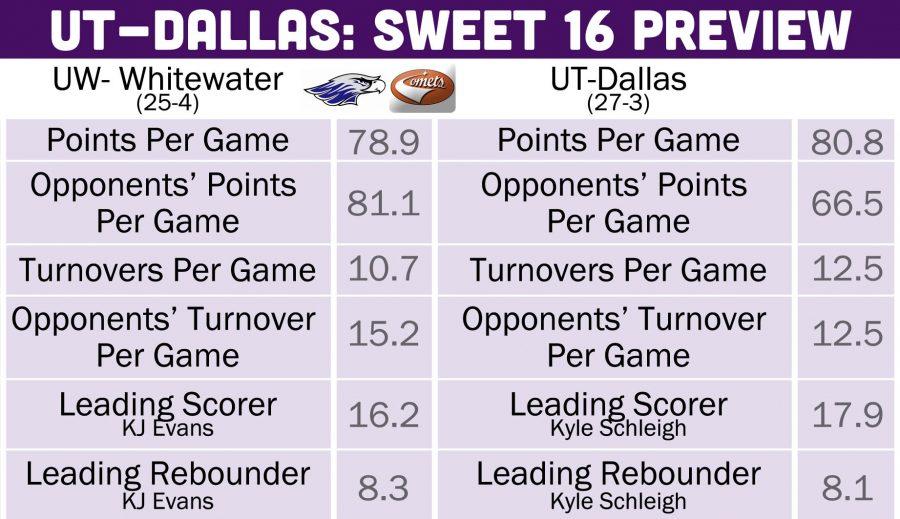 It is the name of the game come postseason time.

The Warhawks men’s basketball team did much more than that on March 7 and 9 to advance to the fifth Sweet 16 in school history.

The Warhawks (23-4) opened the NCAA tournament with a 24-point throttling of the Northwestern Minnesota Eagles (16-11), 79-55. The ’Hawks thrived against the Eagles’ man defense.

“We just felt like if we get them spread out and attack them off the dribble, we would be able to get in the lane and create opportunities,” head coach Pat Miller said. “We did a better job of that in the last 10 minutes in the first half and initially in the second half as well.”

“I thought the play that really gave us a lot of momentum was Clay Stevens hitting the three at the end of the half,” Miller said. “We were tentative, especially the first 10 minutes of the first half. That shot put us up 15 and gave us a little momentum, which was pretty important.”

The ’Hawks scored 17 points off the Eagles seven first-half turnovers.

When the Eagles ran a zone, UW-Whitewater thrived off crashing the glass, out-rebounding them, 39-22, for the game.

The ’Hawks then faced the Augustana Vikings (19-7) after the Vikings had upset No. 18 St. Thomas 88-77 the night before, according to NCAA.com.

It was a close contest throughout the first half, but the ’Hawks held a 44-39 lead heading into the intermission. They out-rebounded the Vikings team 20-11.

When senior guard Eric Bryson was sent to the bench early in the first half with two personal fouls, junior guard Cody Odegaard stepped up with 12 first-half points.

“With Patrick Souter being injured, we needed someone to step up,” Miller said. “He [Odegaard] really provided some valuable minutes.”

The Vikings tied the game at 48 with 16:27 left in the second half before Young went 1-2 from the line. Evans nailed a three, and the rout was on.

“We stayed after them,” Miller said. “In the first half, I thought there were a couple times where we were about to go on runs. (Viking guard Hunter) Hill hit a couple of big shots that kind of stifled our momentum. Our defensive effort was great in the second half.”

Evans had a great game for the ’Hawks, leading them with 25 points and 12 rebounds.

“My teammates did a great job of getting me open and getting the ball to me,” Evans said. “I was able to take advantage of that and make some big shots.”

Young had 18 points on 6-8 shooting from the field and three assists.

“We got them stretched out, spacing the floor,” Young said. “I was able to get to the basket several times and find my teammates a few times for some open shots as well.”

Evans had a monster break-away dunk in the second half that got the crowd whipped into a frenzy.

“I missed the last dunk, so I knew I had to make up for it,” Evans said. “Coach wasn’t too happy about it [the missed dunk].”

Young is happy to be back in the Sweet 16 after falling short last year.

“It’s a humbling feeling,” Young said. “We have been there before, but we don’t want it to be over. We know it is going to be tougher and tougher, so we just have to prepare accordingly.”

The ’Hawks could possibly meet up with UW-Stevens Point for the fourth time this season in the Elite Eight. The ’Hawks have lost to the Pointers both times on the road, but they did hand them their only loss of the season at home on Feb. 5.

“The big thing is we have to avoid everyone talking about us playing Stevens Point because we both have to win a game prior to that happening,” Miller said.

The ’Hawks will travel to Stevens Point to play the No. 16 University of Texas-Dallas Comets (27-3) on March 14 after they hit a game-winning buzzer-beater 3-pointer against Whitworth.

The ’Hawks will have to do their homework against the Comets because Miller said he has never seen them on tape.