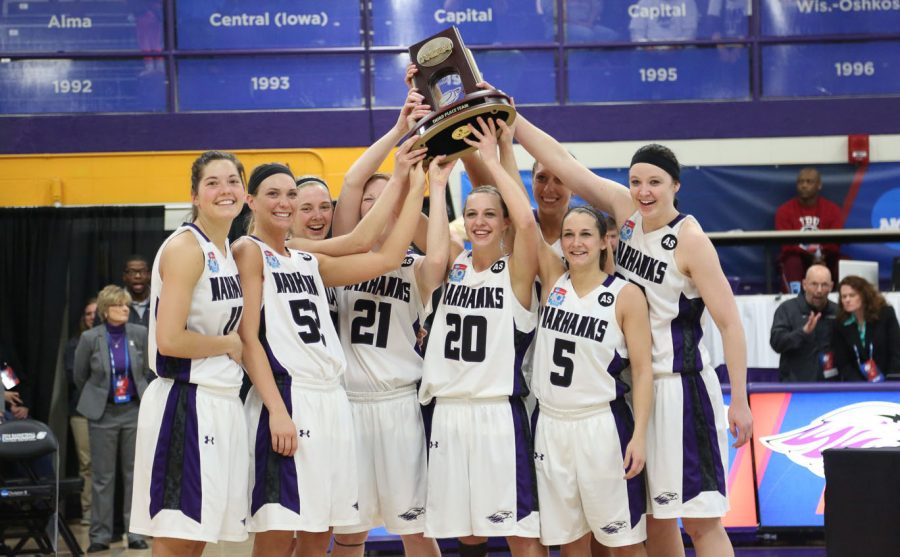 Just one season ago, the UW-Whitewater women’s basketball team created magic in the Final Four.

The team had fallen short, losing to undefeated DePauw University in the national championship game, but memories were made.

This time around, the team didn’t make SportsCenter’s top play, or win the national championship either, but the record books were re-written.

After falling to the Whitman Missionaries in the Final Four, 85-70, Warhawk senior guard Mary Merg said the season wasn’t over just yet.

“Even though it’s not the game we want to be in [third place game against Tufts], we still have the opportunity to play this game,” Merg said. “We’re going to make the most of it.”

The ’Hawks did just that, and Merg etched her name into UW-Whitewater’s history books in her final game as a Warhawk. With the game at hand as the team was leading 65-46 with 1:36 remaining, Merg was seven points away from becoming UW-Whitewater’s all-time scoring leader.

Entering the game, she needed 30 points to pass Jody Landish (1991-95) for the top spot. A few successful free throws and a jumper later, with 36 seconds left to play, Merg was at the charity stripe and needed to make both to clinch the record.

After the two made free throws, the all-time scoring leader was in tears as many Warhawk fans in the gym rose to their feet giving a load roar, cheering on the historical mark that had just been broken.

Merg was subbed out of the game with 1,378 career points and the ’Hawks went on to defeat Tufts 72-54 for a third place finish in the NCAA Tournament.

In the Final Four game against the Whitman Missionaries (30-1) the day before, the Warhawks started off on the right foot, leading 7-2 early.

With 10:37 to go in the opening half, senior center Kristen Ruchti picked up her second personal foul, limiting her presence until halftime.

Ruchti, who was starting her second game of the season since starting sophomore guard Abbie Reeves injured her shoulder in the Sweet 16 game against UW-Oshkosh, saw her team fall behind to the Missionaries 41-30 after the first 20 minutes of play.

Head coach Keri Carollo said she knew foul trouble could turn into an issue with a shorter bench.

“She [Ruchti] is obviously a big presence in there not only with rebounding, but with scoring,” Carollo said. “I think that was unfortunate that she picked up a couple early fouls and that definitely changed the game for us defensively. We had to figure out how to bounce back from that, but I thought they did a really good job attacking us in the post.”

In the second half, the Missionaries kept attacking and scored the ball at will, eventually winning 85-70.

The Warhawks got within seven points multiple times throughout the second half but did not have enough inside at the end as Ruchti picked up her fourth foul with 11:23 remaining.

“I know my moves and if I felt good I would take those shots and I know my coaches definitely give me the go-ahead if I’m playing well,” Mandrell said. “The main goal tonight was rebounding, so my contributions there weren’t the best that I could’ve done and I probably could’ve done a little bit better in places.”

Ruchti and senior point guard Kaitlyn Thill both fouled out before the game ended. The Missionaries shot 49.2 percent from the field for the game compared to the ’Hawks’ 33.3 percent.

The team from Walla Walla, Wash. out rebounded the Warhawks 48-38 and made 21 of their 25 free throw attempts.

After the victory over Tufts in the third place game the day following the loss to Whitman, Carollo reflected on her class of eight seniors.

“They’ve been to two Final Fours, went 16-0 this year in conference…,” Carollo said. “Gosh, the list goes on and on. They’re the reason why we’ve had the success that we’ve had. We’ve been blessed with really great players, and not only that, but great people.”