Saving lives, one pint at a time 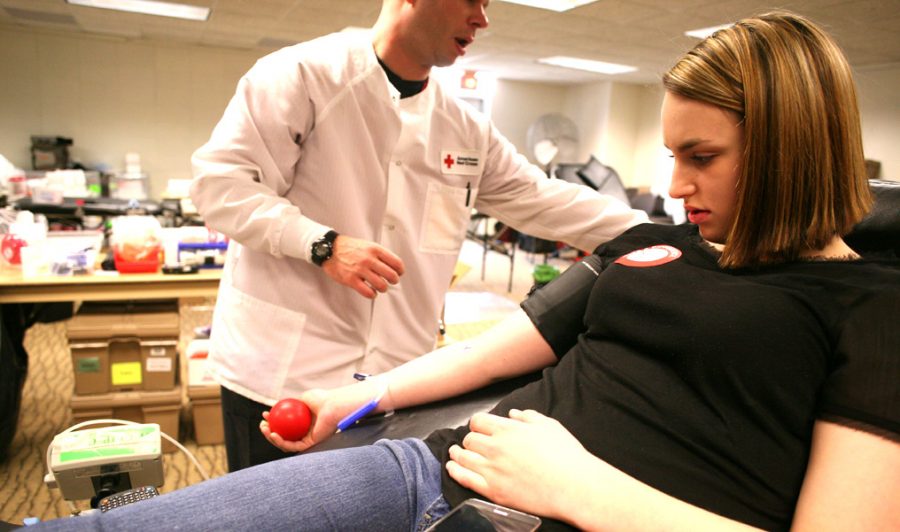 By Kristie Weiss and Jacqueline Schaefer

The UW-Whitewater Student Optimist Club teams up with the Red Cross to host its blood drive every April and November.

The blood drive this semester was held April 9 to 10 in Esker Dining Hall.

For some students, this is their first experience donating.

“This is my first time giving blood, and it was about as normal as I could have expected it,” junior Adam McCann said. “Honestly, giving blood is important.The mood struck me out of nowhere, and I did it and I will continue to do so.”

Some students are experienced and see the importance of continuing to donate.

“This is about my fifth time giving blood,” freshman Aaron Meyers said. “I donate because I like to help people.  I’m volunteering right now and have been getting people water and snacks.”

Student Optimist Club President Annie Henkle, along with other members, was in charge of getting food donations for the blood drive, such as pizza donations from local Whitewater businesses.  The businesses usually donate for one of the two days.

“We get food donations because it pulls people in knowing that they get free pizza,” Henkle said.

Along with bringing in donations, the club puts up posters around campus to make the student body aware of the cause. Frank Bartlett, adviser for the Optimist Club, helped the students with some of the publicity and getting the word out on campus for their events such as getting on the Whitewater banner.

“My role with the Optimist Club is more of an advisory capacity, so I am in the UW Community Optimist Club, and that is where they tend to get someone to be an adviser to work with the student optimists,” Bartlett said.

Barlett also is an active donor himself.

“In one way, you’re coordinating an effort that gives back to society, and two, you’re giving yourself, so it is a dual role for me,” Bartlett said.

Besides donating blood, students also are able to volunteer at the blood drive. Three volunteer options are available: helping at the registration table, the donor room or the canteen room.

At the registration table, students are in charge of signing people in to donate.  Donors are given a red name tag if they have donated before or a green tag if it is their first time donating.  They are then asked to sign into the computer and are given a booklet on information about donating for the Red Cross.

In the donor room, volunteers circulate around the room and ask the donors if they would like food or beverages.  The canteen room is where the donors go afterwards and is where the snacks, pizza and beverages are held.

Bartlett said giving blood is a positive experience and it was a challenging moment in his life, but he donates rather frequently now. Bartlett also said the drives have been a great process and the students are meeting the needs of the Red Cross Organization because they keep coming back.

The bone marrow drive also was going on at the same time as the blood drive.  Blood donors can become bone marrow donors through Be the Match.  Be the Match registry is the donor registry operated by the National Marrow Donor Program (NMDP).

The Optimist Club’s involvement in the community doesn’t stop at the blood drive.

“Our club is a service learning organization, so we do a lot of volunteering,” Henkle said.

The Optimist Club works with kids from the elementary schools around Whitewater.  Henkle said some things they have done in the past are help the schools with hearing and eye exams, along with reading to the kids.

As a president, Henkle is working on rebuilding the club.  Her main role as president is to keep the group active.

“It is really important to get people to come to the meetings and engage with what we are doing,” Henkle said.

Meetings are held at 5:15 p.m. every other Wednesday in the UC. At the meetings, the club makes tie blankets for the Dodge County Fire Department and puts together social gatherings, such as dinners and bowling, to bond as club members.  Henkle said it is a pretty relaxed club and does not require any specific major or minor to join.