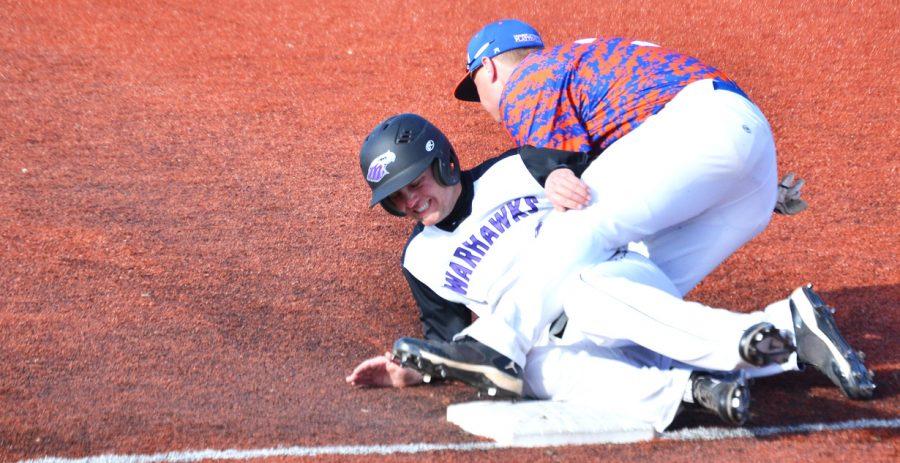 The No. 4-ranked UW-Whitewater baseball team improved to 25-6 overall during the weekend, taking two games and splitting the four game series vs UW-Stout.

It was the Warhawks’ first time playing the Blue Devils this season, but one other battle on the players’ minds was raising money to fight cancer.

On April 26, in the first of the two doubleheaders, the ’Hawks hosted a fundraiser with the proceeds going to the American Cancer Society.

The UW-W players each wore special uniforms, honoring someone close to them suffering from cancer.

The players will send their uniforms and a letter to the people or families of those they played for.

Throwing out the first pitch on April 26 was the father of freshman pitcher Austin Jones, who is currently in treatment for cancer.

The two shared a heartfelt moment following the pitch, hugging on the field.

“Having his dad throw out the first pitch was great,” shortstop Mikole Pierce said.

After losing the first game of the doubleheader 3-1, the Warhawks found themselves in the same position in the second game.

The ’Hawks were down 3-1 heading into the bottom of the ninth inning. The’Hawks needed to get their bats going to pull of the comeback.

Second baseman Nick Kuhlman led off the inning with a single, and moved to second on a single by junior Kyle Haen.

Third baseman Jared Fon was then hit by a pitch, and the bases were loaded with no outs.

The offensive production didn’t stop there, with center fielder Dylan Friend lining another single to center, cutting the lead to 3-2.

Freshman Dylan Bersch came in to pinch run for Fon.

Pierce ended the game in walk-off fashion for the ’Hawks, hitting the ball up the middle to score Bersch and Haen. The Warhawks won with a final of 4-3.

“We were struggling to hit all day, so we were just trying to pass the bat down the line and keep everything going,” Pierce said. “I was just lucky enough to be able to get that last hit and win the game.”

Fittingly, Jones came away with the win for the Warhawks after pitching a one-two-three ninth inning.

First baseman Casey Power thought the team played with extra motivation. Power was playing for a six-year-old family friend who is currently in treatment for cancer.

“She’s a great little girl, and she’s in her second battle with brain cancer,” Power said. “But it sounds like she’s doing well these days, so playing for her was great.”

On April 27, the ’Hawks won game one, 7-4. Senior Brock Liston picked up the win for the Warhawks to move to 6-1 this season.

Jones came on in the ninth inning again, this time recording the save.

The team fell to the Blue Devils in game two, 2-1, to end the series.

Head coach John Vodenlich believes the team didn’t play to its capability in the series.

Both Power and Pierce agreed with Vodenlich, saying they didn’t play their best baseball.

“It’s a long season, 40 games, and the key is really trying to play your best baseball at the end,” Vodenlich said. “And if you’re playing good baseball, then you have a chance to keep moving deep into the NCAA Tournament, which is obviously what we hope to do.”

Despite splitting the series, the Warhawks remain No. 1 in conference with a record of 13-4.

The ’Hawks will host UW-Oshkosh for a doubleheader at 1 p.m. on April 30.