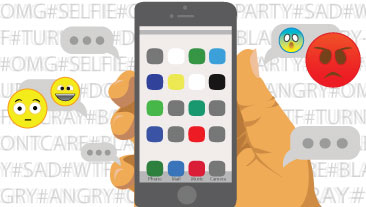 We’ve all been in that position before: You send someone a text; they reply with nothing but a blunt “Ok”—two treacherous letters that glare out at you and make you wonder just what the sender meant by them.

Was it a neutral “ok?” A bright and cheerful one? What if it was a snide way of passively announcing that they’re angry with you?

The problem with the growing usage of communicating through electronic media is that emotion is severed the moment those in conversation can’t see each other’s faces or hear the other’s tones.
When your fingers glide over the keys of a phone or a keyboard, there are few ways to get emotion across without drawing the message out longer than it has to be.

Let’s be real here: we all live for convenience and would rather not waste time typing out novels just to get a single point across.

This is where emoticons—smilies—prove to be a huge advantage.

There is an enormous difference between a message that says “Ok” and one that says “Ok :).” Think about it. In the first example, how are you supposed to know the tone of the text? That person isn’t standing in front of you. You can’t see their face. You can’t hear their voice. The only thing you have is those two letters.

When you add in two extra characters to make a face, the tone may become perfectly clear. Whether it be a smile to indicate happiness, a frown to indicate displeasure or even a “D:<” to indicate extreme displeasure, an emoticon is all it takes to help fill in the passion nonverbal communication takes away.

Today’s society has been taken over by technology.

Most conversations between friends happen through text or type; it’s far more convenient than meeting up with someone—especially when you only have a few things to say. Even calling a friend has become obsolete unless entirely necessary.

If we’re going to continue on this path where the majority of our interactions occur without a face or voice to go along with them, we need to learn the proper etiquette.

Miscommunication occurs when we aren’t careful with how we phrase things. Sometimes, all it takes to help the recipient know what you mean is a single emoticon. “Okay. That’s great!” does the job of letting your emotion pour through, but “Okay. :)” does the exact same job in shorter terms.

Especially when you’re in a hurry and need to stow that phone in your pocket before your professor gives you the stink-eye.

While emoticons should never be used in a professional setting, they will always be a helpful when communicating with friends and family.

Distinguishing which faces mean what can sometimes be a challenge in particular situations, but they usually help more than they hurt. The last thing any of us wants is some miscommunication that develops into an unnecessary conflict just because tones were taken the wrong way.

All of that could be solved with just two to three extra taps on the keypad.

People should start growing accustomed to this form of communication sooner rather than later. With the direction the world is going in, nonverbal communication is becoming important; nearly everything can be done without talking face-to-face.

If we want to keep the emotion in there—provide our friends with the smile or frown that would’ve adorned our features otherwise—we need to make the usage of emoticons a habit.

You never know just what a single smiley face can save.