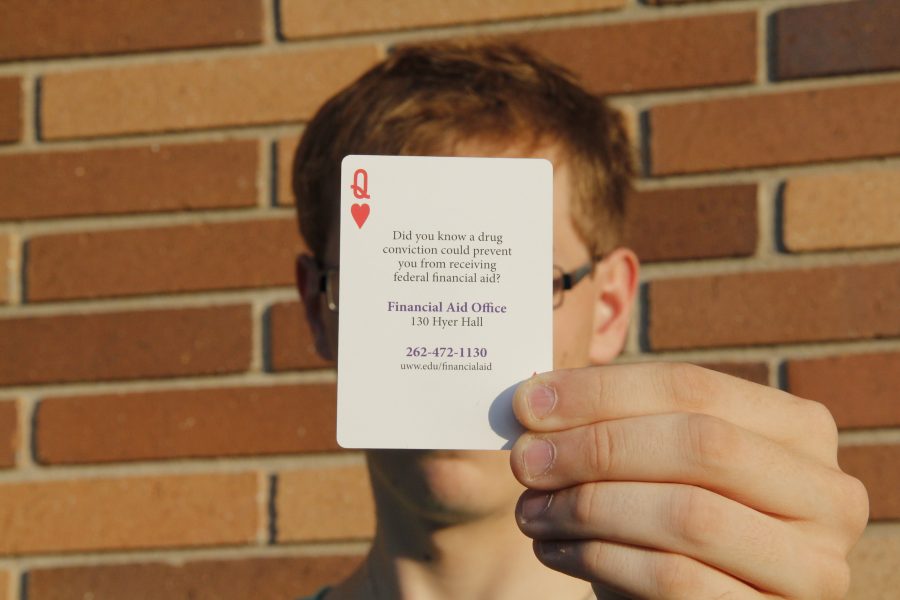 Photo by Sean Kirkby: A former University of Wisconsin-Whitewater student poses with a playing card distributed by the campus warning of the penalties of a drug conviction. The student, who requested anonymity because he is looking for a job, sold drugs to another student on campus who was a confidential informant.

Moments after Javonni Butler was busted for selling marijuana in 2011, he says police officers offered him a deal: Buy drugs to help convict others, and they would “sweep this under the rug.”

Officers had just arrested Butler, a University of Wisconsin-Whitewater student and then-Whitewater Common Council member, for selling what court records describe as small quantities of marijuana twice to another student wearing a recording device.

He faced two felony charges that each carried a maximum of three and a half years in prison and a $10,000 fine and a misdemeanor count of marijuana possession. His arresting officers, Butler said, warned that the charges would “ruin my life.”

Butler declined. In October 2011, he pleaded guilty to one felony and one misdemeanor charge and was sentenced to 45 days in jail. He was suspended from all UW System schools and lost his eligibility for federal financial aid. And, because the state’s constitution bans convicted felons from holding public office, he was forced to resign his seat on the Common Council.

Butler, 25, is still angry, saying students are being pressured to become informants to avoid the consequences he faced.

“It’s just pitiful, it’s disgusting,” Butler said. “They pretty much put kids in a spot until they have no choice but to snitch.”

A member of the Walworth County Drug Unit, which arrested Butler, declined comment on whether the unit still uses students as informants. But UW-Whitewater Police Chief Matt Kiederlen says his department has used about 20 students as confidential informants during the past two years.

Wisconsin Center for Investigative Journalism checks at the UW System’s 13 four-year campuses turned up two additional sites — UW-Stout and UW-Eau Claire — at which officials also acknowledge using students arrested for drug activities to make controlled buys. A recent study conducted by Rehabs.com ranked UW-Eau Claire and UW-Whitewater No. 2 and No. 11 in the nation, respectively, for having the highest proportion of on-campus drug arrests.

Opponents say the use of students in undercover drug investigations could place them in dangerous situations and exploits their vulnerability to losing thousands of dollars of federal financial aid and tuition by being suspended from school.

But supporters defend the practice, saying it provides an opportunity for students to avoid felonies.

“They’re no different from anyone else,” Kiederlen said. “Mom and Dad tend to feel like they’re still in school, but the reality is that they’re adults and they’re making adult decisions. And there are adult consequences.”

In an interview with the Royal Purple, Kiederlen said the best thing a person could do is not get in that situation.

“I don’t know how else to put it,” Kiederlen said. “People are upset that we do this, but the bottom line is, if you’re not dealing drugs, you’re not going to be put in that spot.”

Rachel Hoffman, a 23-year-old Florida State University graduate, was pressured in 2008 to be an informant after Tallahassee, Florida, police searched her apartment and found a small amount of marijuana and ecstasy. But the buy turned out to be an armed robbery, and the robbers killed Hoffman after discovering her recording device, says Lance Block, a Florida attorney.

Block, who represented Hoffman’s parents in a lawsuit following their daughter’s murder, authored a 2009 Florida law that regulates informant use – a practice he says contradicts law enforcement’s purpose.

“The police are supposed to protect us from harm, not subject us to harm,” Block said. “And when law enforcement intentionally expose untrained civilians into these highly dangerous operations, they’re not protecting them from harm … It’s one thing to get information from people secretly and confidentially. It’s another thing to throw them to the wolves, like they did with Rachel.”

Kiederlen says at UW-Whitewater, each operation involves at least two detectives and three to four officers who patrol the area. Officers train informants and check the background of dealers to ensure students buy from those without violent pasts, he said.

“We try with everything we have to predict putting them in the safest position we can, but there are always those unknowns,” the chief said.

But Stephen Richards, a UW-Oshkosh criminal justice professor, says student informants often turn in their own friends and “they’ve made lifelong enemies when they do that.”

He knows from experience. After being arrested for conspiracy to distribute marijuana in 1982, Richards was asked to become an informant. He refused, was sentenced to nine years in prison and served three.

Almost all police departments use confidential informants, Kiederlen says, and his department’s policies are modeled on the best practices. Students who become informants to beat felony charges for selling marijuana typically have dealing supplies and “something else” such as a harder drug, he said.

One UW-Whitewater student used as a confidential informant says he was arrested for selling marijuana and ended up buying ecstasy. The student says he made multiple controlled buys of a few ounces of marijuana while wearing a recording device and a wrist watch with a camera.

He says the administration does not know he sold drugs on campus. He asked for anonymity to avoid hurting future job prospects.

In all, the Wisconsin Center for Investigative Journalism communicated with 10 current and former UW-Whitewater students who were arrested by either the UW-Whitewater police or the Walworth County Drug Unit for selling drugs to confidential informants or possessing marijuana.

Nine were asked to become an informant. All but the unnamed student described earlier refused either because of safety concerns, not knowing other dealers or not wanting to turn in their friends. Eight, including Butler, were charged with felonies; one young man paid a fine.

Butler was suspended late in a semester, losing thousands of dollars in tuition and fees without receiving any academic credit. He criticizes the university for supporting the use of students as informants, calling it a “money-making scheme.”

“I’m ashamed to have gone to Whitewater,” Butler said.

The number of arrests for drug offenses at UW-Whitewater has risen sharply, from 45 in 2010 to 156 in 2012, according to the UW-Whitewater Police Department. That number includes arrests on campus, in off-campus buildings, such as fraternities and sororities, and on surrounding public property.

Kiederlen attributes the increase to the development of the confidential informant program at UW-Whitewater in July 2012. In 2013, however, arrests fell to 94, according to Kiederlen, a roughly 40 percent drop he partially attributes to scaring off dealers.

“They’ve made a mistake, shall we say they’ve paid back their debt, and now they’re going to move forward,” he said. “So to me it’s a positive all the way around.”

But Richards says the use of informants harms the campus environment.

“I think it’s detrimental to the campus, and to what we try to do on a college campus, which is to provide a safe and supportive environment for university students to learn,” Richards said. “It disrupts our mission.”

Alexandria Zamecnik, news editor for the Royal Purple contributed to this story.

This report was produced in collaboration with Wisconsin Public Radio reporter Gilman Halsted. The nonprofit Wisconsin Center for Investigative Journalism (www.WisconsinWatch.org) collaborates with WPR, Wisconsin Public Television, other news media and the UW-Madison School of Journalism and Mass Communication.

All works created, published, posted or disseminated by the Center do not necessarily reflect the views or opinions of UW-Madison or any of its affiliates.