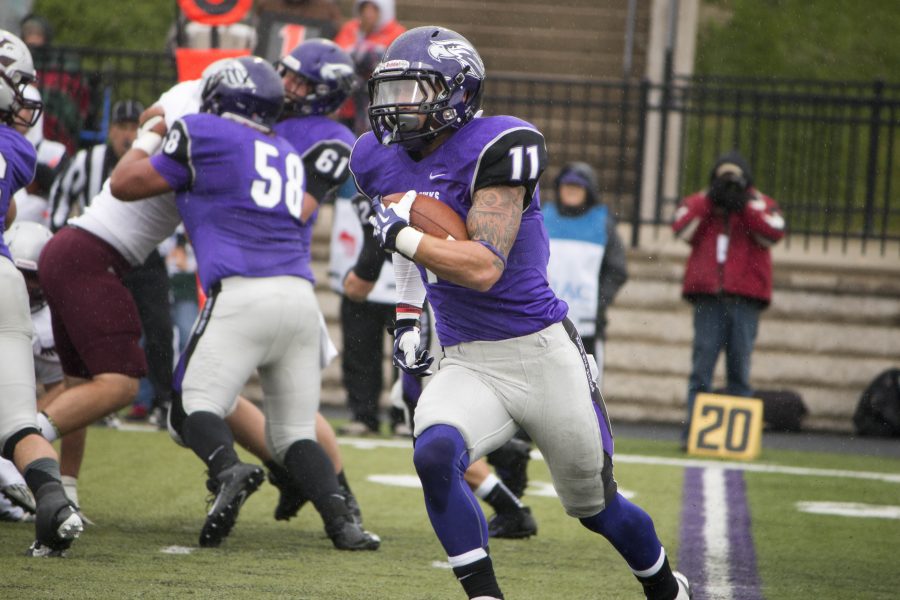 More than 10,000 fans gathered in Perkins Stadium Oct. 4 despite the cold, rainy weather to watch the football team kick off its conference season at Family Fest.

The Warhawks had won 12 consecutive WIAC opening games prior to this season, and Saturday’s contest was no different.

After a four-week hiatus, the ’Hawks returned home to face off against UW-La Crosse and trampled over the Eagles, 38-7.

“I was kind of concerned coming into this, because we’ve been so out of rhythm – a Friday night game, two long away games, an off week,” head coach Lance Leipold said. “You gotta trust your guys, and I think they did come out, once that ball was kicked off, with good enthusiasm.”

The ’Hawks racked up 619 yards of total offense, including 315 yards on the ground, compared to the Eagles’ 155 total offensive yards and a mere 11 yards rushing.

Coming into the game, senior quarterback Matt Behrendt accumulated a 72 percent completion percentage with 543 yards and five touchdowns, good for the number one spot in the conference.

“Early in the game, we love to go no-huddle,” Behrendt said. “We want to be able to run the ball as much as we can so we can open up the pass more. What we did great today was we just took advantage of all the opportunities.”

Junior running back Nick Patterson, who averages more than 10 yards per carry and 97 yards per game, capped the day with two touchdowns and 63 yards.

“We always come out with a great game plan, and at first [the Eagles] were playing a different type of coverage, so we had to adjust, which was no big deal,” Kumerow said. “[Behrendt] was putting the ball on the money like always, and everyone else was doing their job.”

While the Warhawk offense dominated the game, the defense saw the field for only 18 minutes.

They held the Eagles’ offense to just seven first downs, three-for-12 on third-down conversion attempts and an average of 3.6 yards per play.

Junior linebacker Justin Dischler led the ’Hawks with 3.5 tackles, and 24 other players combined for 33 total tackles.

“When we’re out there, we all want to make plays, and we all want to see each other make plays,” said junior defensive lineman Zach Franz, who posted two tackles for a loss and one sack. “We just made an emphasis in the offseason that we’re going make more plays; we’re going to get bigger, faster and stronger.”

Even sophomore kicker Lake Bachar got in on the defensive action with a big hit to start the second half.

“He hit [the Eagles’ player] harder than I hit anybody all day,” Franz said. “Lake gained 10 or 15 pounds of muscle.”

The No. 1-ranked ’Hawks, according to d3football.com and the American Football Coaches Association, improved to 4-0 to extend their win streak to 21 games, while the Eagles fell to 1-3.

“It’s a good way to get the conference season started,” Leipold said. “I thought our defense played outstanding and took a necessary step in what we needed, and offensively, I’m extremely pleased with the balance we were able to obtain. Any time you can get a win over La Crosse, it’s always good.”

With the victory, the ’Hawks marked the 12th-consecutive win against the conference foe.

Although the Eagles’ offense struggled throughout the game, Leipold said they have an experienced offensive line and are equipped with talented running backs, focusing primarily on play action.

He caught a six-yard pass from junior quarterback Trent Cummings, one of three quarterbacks in the starting rotation for the Eagles. Cummings totaled 144 yards on the day.

Up next, the ’Hawks’ quest for perfection continues Oct. 11 as they travel to Menominee to take on UW-Stout.

“Every week is a special week,” Behrendt said. “We take one week at a time, one team at a time; that’s our mentality.”