Students need to be informed before voting 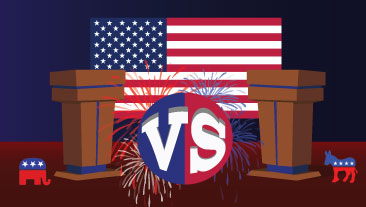 With the gubernatorial elections quickly approaching on Nov. 4, most of Wisconsin’s citizens have been considering who they believe deserves their vote: Scott Walker or Mary Burke.

The past month, UW-Whitewater students have been registering in preparation for Election Day. Those who care and should care are ready to vote on who governs our state.

Walker and Burke’s second and final debate took place at 7 p.m. on Oct. 17 at the WMVS-TV studio in Milwaukee. The Wisconsin Broadcasters Association put it on the air with 94 live broadcasts spanning across both radio and television stations. Plus a few websites such as PBS offered a live feed.

With all of the available methods of viewing the debate, there’s no reason for any voter to have avoided tuning in.

As college students, we’re the future of this state — of this country, rather — and our opinions become more important than they’ve ever been. We’ve become better aware of how we want things to be run around here, and if we want a say in the matter, we have to be willing to get up and vote.

While voting in itself is important, it’s even more important for voters to be well-informed on the election, not just to vote for who their friends tell them to vote for.

We shouldn’t be voting for someone blindly.

This is where debates play a big part in decision-making. They’re public so we can hear what our desired governor has to say and better decide if that governor is who we want in command. Knowing a candidate’s background is one thing, but listening to their take on current issues in the economy is another.

A governor you thought you supported could make one little comment that drives you in the opposite direction, and if you aren’t viewing the debate to witness it, you could be voting for the exact wrong person.

No matter what anyone else says, every vote counts. The last thing anyone wants is for their vote to go to someone they don’t realize they don’t support until they’re already governor. There are no take-backs. There will, however, be a great deal of regret afterward.

It’s imperative for voters to be well-informed; this is the precise reason why we have publicized debates in the first place. If people aren’t watching those debates, then what are they there for?

We can be smart about who we vote for. We can do more than just fill in that bubble on the page for the candidate we only know an inkling about. And all it takes is to sit down for less than an hour and view the debate we have easy access to.

There’s no excuse not to.

Only 28 percent of registered voters said they watched the debate while 20 percent said they heard about it afterward, according to a poll taken at Marquette Law School.

It’s uncertain what these statistics say for UW-W, but the percentage likely isn’t too far off the mark. This could mean that a lot of registered voters are too confident about who they’re voting for to care to listen in.

Even if you were too busy that Friday night (which is understandable), the debate is available on a handful of websites to view whenever you have a decent slot of time.

One website has a video complete with captions, which can be viewed at http://www.c-span.org/video/?322065-1/wisconsin-governors-debate at any convenient time.

Every student should be well-informed on who they’re voting for. We’re the future, and we need to take responsibility for that.

Don’t settle with being left in the dark.