Siblings shine on the court 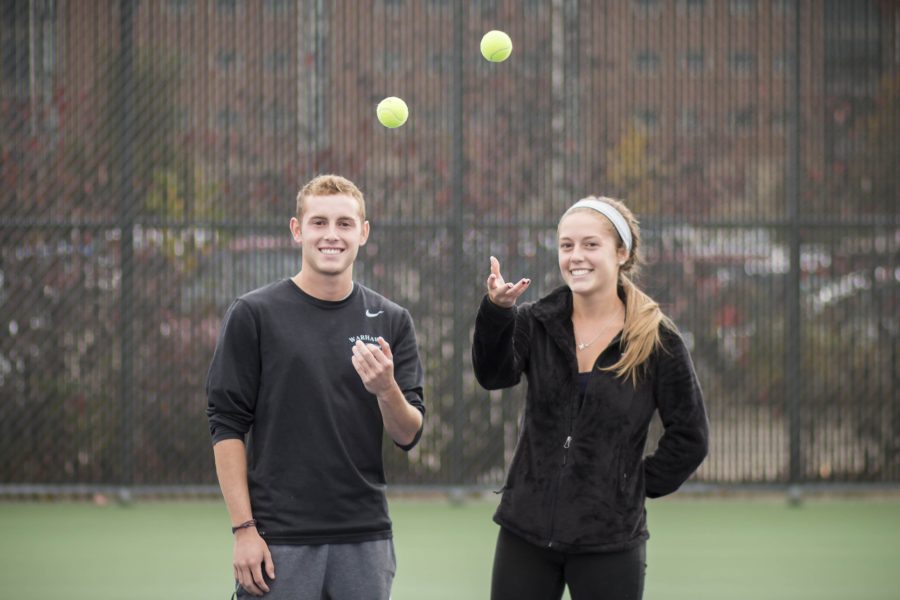 For UW-Whitewater’s Jake and Megan Humphreys, the spirit of competition has run through their veins on and off the tennis court since childhood.

“We compete in everything we do really,” Jake Humphreys said. “We even compete in ping-pong matches, screaming at each other. We’ve been competitive our whole lives.”

Two years ago, the competitive nature of their relationship temporarily took a back seat and turned into a positive reinforcement for the duo as Megan decided to join her brother in playing for the Warhawks tennis program.

“I think now, we’re not trying to be better than each other,” Megan Humphreys said. “It’s kind of just fun to see us both doing so well. It’s just all in fun.”

Even though Jake Humphreys is a year older than his sister, it was Megan who first picked up a tennis racket.

It wasn’t until the age of seven, when Jake watched Megan during lessons, that he gained the desire to pursue a future in tennis.

“I was like, ‘Mom, I really want to do this’, so she agreed,” Jake Humphreys said. “After a while, this coach was like ‘Wow, this kid’s got talent.’”

The Humphreys’ join a long line of recent sibling athletes who have competed at Whitewater, including Jake and Courtney Kumerow (football and basketball respectively), Alex and Mary Merg (basketball), and Andrew and Alexandra Bayliss (tennis).

’Hawks tennis head coach Frank Barnes said both the Baylisses and Humphreys have played a key part in building the tennis program into what it’s become today.

“Both of them [the Baylisses and Humphreys] have been important to our program,” Barnes said. “The Baylisses turned the landscape of the program around and bring us to the next level, while [Megan and Jake] have given us firepower at the top of the lineup. Both sets of siblings are just a coach’s dream.”

A coach’s dream the Humphreys’ have been so far.

Jake Humphreys, a junior, has collected 95 wins in two-and-a-half seasons at singles and doubles, including a first-place finish at the 2014 Intercollegiate Tennis Association Regional Championship last fall in Minnesota.

Perhaps none of these accomplishments would have been possible without the adjustments the pair made to their playing styles since coming to Whitewater.

Both said they were used to playing defensive-minded matches, where their goal was to stay in a point as long as they could instead of attacking the ball any chance they got.

“I think we both play very similar games,” Jake Humphreys said. “We were counterpunchers who just got the ball back [over the net], making the other player beat you. But over the years, my game has become more aggressive, getting stronger and learning from Coach Barnes’ strategies.”

“I also worked on a more aggressive, more offensive style of play” Megan Humphreys added. “I think that really helped me at nationals. I could put a ball away when I needed to and not just keep the ball in play.”

Because they play with similar skill sets, the Humphreys’ said they are always learning from each other, especially when it comes to staying focused throughout a match.

“Our voice and opinion is mostly motivation,” Jake Humphreys said. “I think we’ve watched each other so much in the past that we know each other’s game very well and we have respect for that.”

“You don’t realize how important it is to keep your head focused,” Megan Humphreys said. “If you lose focus for just a split second, that could be a whole game, a set or a match.”

Off the courts, their relationship is like any other brother-sister relationship. They try to find time to spend with each other, but the commitments to school and athletics make it difficult at times.

“We go to each other for advice and if we have problems, we just call each other up,” Humphreys said. “We have a good relationship for sure.”

With both under the fold for at least two more full seasons, Barnes is looking forward to what the Humphreys’ careers still hold.

While the Humphreys’ skills show on the court, Barnes also sees the pair’s attitudes and leadership abilities as something that provides another unique aspect.

“Both are really incredible people off the court,” Barnes said. “Everyone loves them. They’re not just great tennis players, but great representatives for the school and the program.”