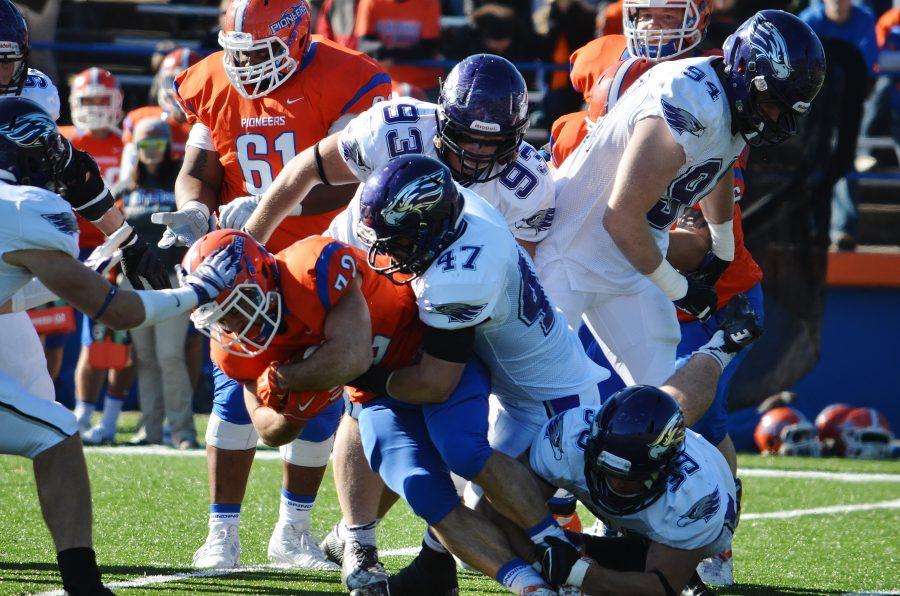 The rivalry between UW-Whitewater and UW-Platteville’s football teams has been long in the making. Since 1993, the two teams square off each year in the George Chryst Memorial Bowl, named in honor of former UW-P head coach George Chryst, to earn the Miner’s Pick.

This season, the Warhawks took the rivalry trophy, along with the win that secured sole possession of first place in the WIAC.

The ’Hawks handed the Pioneers their first conference loss of the season Saturday, as they beat the Pioneers, 17-7, in what proved to be their closest game thus far.

With the victory, the ’Hawks extended their win streak to 25 games, good for the second-longest active streak in NCAA college football, and put themselves in position to claim their ninth conference championship in 10 seasons.

As the first nationally-ranked team the ’Hawks had seen this season, senior defensive back Brady Grayvold said the team knew the Pioneers, ranked No. 16 according to d3football.com, would pose a threat.

“Their defense was a lot better than they said they were going to be, so we knew that was going to be tough,” Grayvold said. “Their receiver corps is probably one of the better in the conference, but we knew we just had to get stops when we needed them.”

The Warhawks’ defense did just that.

After a scoreless first quarter, the Pioneers struck first with a touchdown midway through the second quarter which marked the second time all season that the ’Hawks have trailed an opponent.

But the ’Hawks answered back with six seconds remaining in the half after senior quarterback Matt Behrendt found sophomore tight end Logan Solano in the end zone to tie the game up before heading into the locker room.

“I was very pleased with the way we played defensively,” head coach Lance Leipold said. “At the half, there weren’t a lot of adjustments to make. We were right where we wanted to be. We were just in a battle.”

The Warhawk offense added 10 points onto their score in the third and fourth quarters, by way of a 35-yard field goal by freshman kicker Will Meyer in the third and a touchdown pass from Behrendt to senior tight end Derric Junakin early in the fourth.

On the next drive, the Pioneers marched into the ’Hawks’ red zone, only to lose the ball.

When the Pioneers got the ball back, they again drove deep into ’Hawk territory, but this time UW-P quarterback Bryce Corrigan was picked off by Grayvold near the goal line to put away the game.

“Platteville’s a good team,” Grayvold said. “They had a good offense scheme-wise, and we did our job again. This was a defensive effort, but I thought our offense did all they could, and they did very well.”

Behrendt went 16-for-27 with 177 yards and two touchdowns, while junior running back Jordan Ratliffe ran for 105 yards in 14 carries to lead the offense.

The ’Hawks accumulated 420 total offensive yards, compared to the Pioneers’ 315, and gained 243 on the ground while holding the Pioneers to just 68.

Senior wide receiver and preseason All-American Jake Kumerow sat out Saturday’s contest with a high ankle sprain, but fellow senior receiver Justin Howard stepped up for the ’Hawks with 84 yards in six receptions.

Despite the loss of Kumerow on offense, Leipold said he was impressed by the ’Hawks’ defensive performance.

“This is the type of game we expect,” Leipold said. “[UW-Platteville has] been a really high-scoring team because of their run game and balance. For our defense to give up seven points to a team like this is outstanding.”

Dischler led the Warhawk defense – which ranks No. 1 in the nation in points allowed at 5.3 per game – with eight tackles and a forced fumble, while senior defensive backs Marcus McLin and Ryan Winske each posted seven stops.

Grayvold recorded five tackles, and his interception marked his fifth this season, which ties for third in the conference, and 11th in his last 13 games.

Next week, the Warhawks will play their last home game of the regular season at 1 p.m. on Nov. 8 at Perkins Stadium.

“We played in a big game, and we have another big game coming up,” Grayvold said. “With a win next weekend, that’s the first step in the goal this year; just to win the conference title. So we have a chance to do that back home at the Perk.”