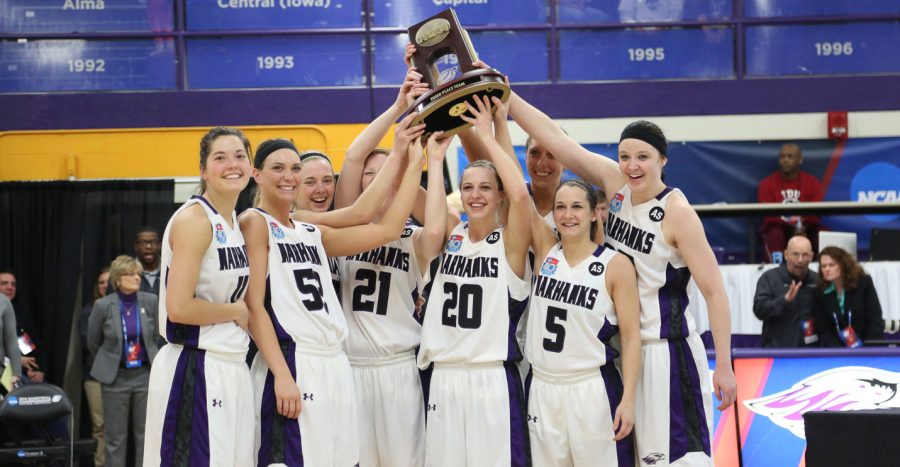 The No. 14-ranked UW-Whitewater women’s basketball team is not concerned with the lack of respect they are getting heading into the 2014-15 season.

The Warhawks cracked the top-15 according to the D3hoop.com preseason poll released last week. The ’Hawks are also projected to finish second in the WIAC by the league’s coaches and sports information directors despite finishing third in the NCAA D-III Championship Tournament last season.

The ’Hawks lost eight seniors to graduation including five of the team’s top six scorers. That being said, Reeves is set to return this season alongside Palmer on the court.

“As a team, we have high expectations no matter what year it is,” Reeves said. “We set goals every year. It’s to win every single home game, to win the conference, to win region games that are important. We can’t lose to teams under .500. That’s one of our biggest things, because that will hurt us so much. [We want] to make it to the NCAA Tournament every year.”

Palmer, who averaged 5.8 points and 6.8 rebounds in her freshman season, suffered a knee injury that forced her to miss all of last season.

The starting line-up will also likely feature returning sophomore guards Reilly Stewart and Andrea Olsen. The two freshmen role players last year, which is no easy task considering the strength of the program, averaged more than 10 minutes a game. Junior center Emily Jensen will look to round out an undervalued starting line-up.

“Reilly [Stewart] is really passionate so I think we’ll all feed off of that on and off the court,” Palmer said. “Andrea [Olsen] is very sneaky. She’s quick and one of our best defenders, so I think she will really impact us in that way.”

No. 5-ranked UW-Oshkosh is projected to unseat the Warhawks atop the WIAC standings. The Titans finished with a 26-4 record last year which included a Sweet 16 exit at the hands of the ’Hawks 57-69. Whitewater also swept the regular season series with the Titans on Jan. 8 and Feb. 15.

The ’Hawks are set to kick-off the regular season with a home game against the University of Chicago at 2 p.m. on Nov. 15 in Kachel Gymnasium.

“We take it one day at a time,” Reeves said. “We just worry about the next day at practice and how we need to get better and what we need to work on. Right now we’re just focused on our defense, and fixing the little things.”