Leipold to run with the Bulls 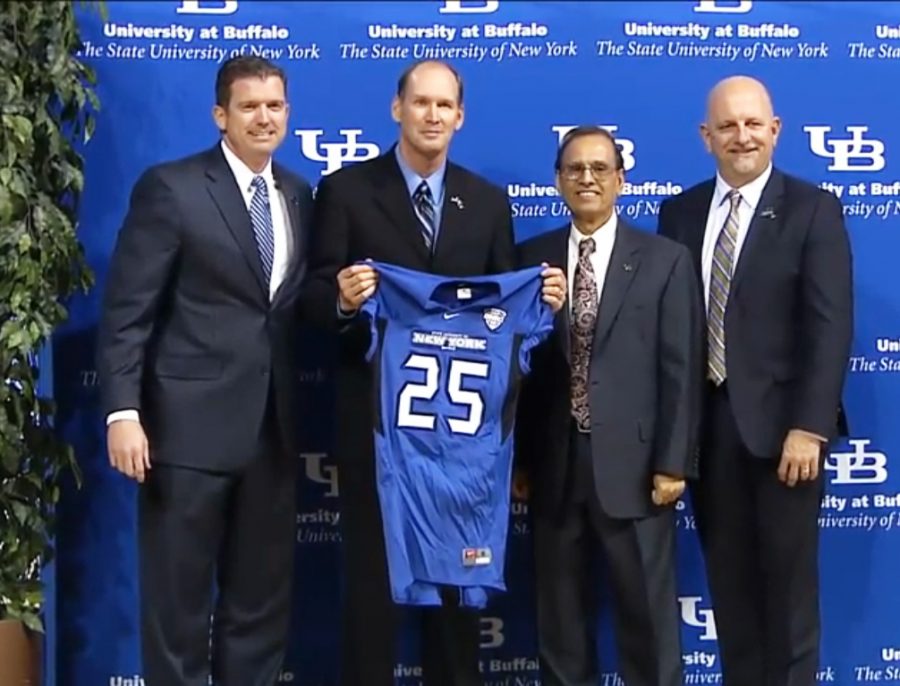 With the success head football coach Lance Leipold attained during his reign at the University of Wisconsin-Whitewater, it’s reasonable for fans, athletes and alumni to wonder how long a small Division-III institution would be able to hold on to such an integral component to the team’s achievements.

Even ESPN.com senior national columnist Gene Wojciechowski mentioned the plight of Amy Edmonds, Athletic Director at UW-W, during his segment on College Gameday which featured the Warhawk football team.

“[Edmonds] says she sweats out every offseason, wondering if another program is going to come in there and try to hire away Leipold,” Wojciechowski said.

After five national championships, six national Coach of the Year awards and a 106-6 record to date, the Division-I University of Buffalo has officially done just that, as Leipold announced in a press conference Dec. 1 he will take over as head football coach after this
season.

“When the question was asked, ‘What would it take for you to consider ever leaving Wisconsin-Whitewater?’ – a place where I grew up, received two degrees, and essentially had gone home – I said, ‘It had to be special,’” Leipold said during the conference. “That quickly became apparent in the very first conversation of what is here and what is coming down the road as a program, an athletic department and as a university, and the opportunity to be a part of that is something that I am extremely humbled and honored to have.”

The UB Bulls, who have struggled to find consistent success since coach Turner Gill left the program in 2009, just ended this year’s play with a 41-21 victory against the University of Massachusetts this past weekend, but had only accumulated a 5-6 record on the season.

Former head coach Jeff Quinn was fired Oct. 13 after a 3-4 start to the season and had compiled a 20-36 record in his tenure.

Due to the rebuilding phase that UB Director of Athletics Danny White said the Bulls are in, he said he sought out coaches who had already established a winning tradition.

“It’s a unique proposition, to get a chance to build an athletic department,” White said. “I was targeting successful head coaches, proven head coaches that have won. Coach Leipold was at the top of that list very early on in the process. Beyond [his success], it became obvious to me that this is a man of character; this is someone that’s going to continue the tradition we already have of recruiting high-character kids, student-first student-athletes.”

Leipold met with his future players early Monday morning before the press conference, noting his excitement for the upcoming season with this new team.

“What an impressive group of young men, not just as athletes but the eye contact, the body posture, the eagerness, the willingness to accept change and transition,” Leipold said. “I know they’re hungry, and they’re ready to get to work, and I’m equally excited.”

Despite the anticipation swirling around the move to Buffalo, Leipold said he will remain head coach in Whitewater as long as the ’Hawks continue in the NCAA D-III playoffs.

“His commitment to seeing [this season] through, I think, is very important and is a testament to his character,” White said. “He asked his players to be committed for the whole season in an attempt to win their sixth national championship, and he’s going to do the same thing. I know I can speak for most in the room when I say we’re huge Warhawk fans and wish you the best of luck as you compete for that sixth national championship.”

The ’Hawks will face No. 5-ranked Wartburg College on Dec. 6 in the quarterfinal game at Perkins Stadium.

“I will be finishing this season and will be there as we prepare to take on an excellent Wartburg team this Saturday,” Leipold told uwwsports.com. “My focus remains with this program and our student-athletes, and on our goal of winning a national championship.”

As for the student-athletes, their attitudes about the situation seem to be mixed. Some members of the football team took to Twitter to express their views.

Senior wide receiver Justin Howard tweeted “Players win games NOT COACHES” and “Talk about DISTRACTIONS.. Smh” on Nov. 30, then followed with a tweet that read “Very happy for @CoachLeipold on his new opportunity! Well deserved.Let’s finish your time as a WARHAWK with a bang!” on Dec. 1.

Senior defensive back Brady Grayvold tweeted “No one man, neither coach nor player, is more important than THE TEAM, THE TEAM, THE TEAM! – Bo Schembechler” and “Adversity causes some men to break; others to break records. Nothing will change the day one goal. Pound The Damn Rock. #UWW” on Nov. 30, then “Congrats to @CoachLeipold on becoming the new @UBFootball Head Football coach! Very cool to have been a part of this! #PoundTheRock.”

The source reportedly was close to the team and wished to remain anonymous due to the upcoming press conference that was scheduled.

Despite the speculation surrounding the Warhawk football team, both Leipold and the players said they are going to continue to focus on finishing the season as national champions.