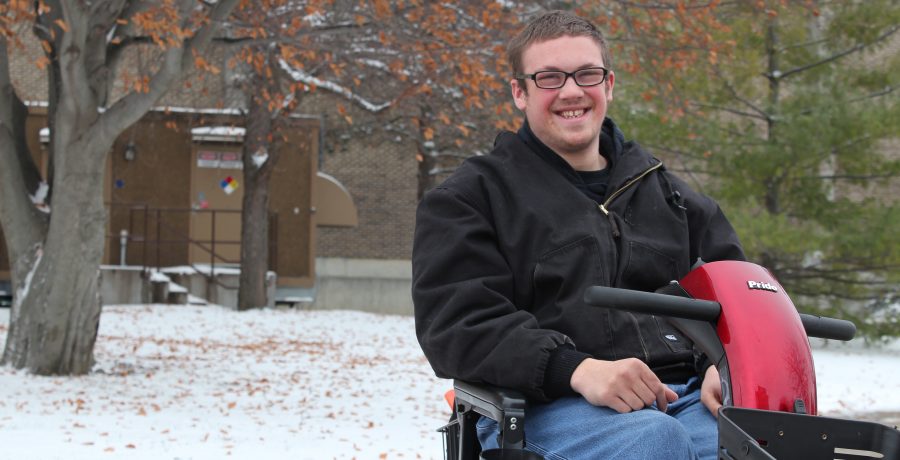 Dan Sandow stops for a photo while going his typical route to class in Heide Hall on his scooter. “i’m smiling even though math isn’t my favorite class,” Sandow said. Amber Levenhagen photo/ [email protected]

Dan Sandow, a student who uses a mobility device, overcomes the challenges of making the daily journey to class in winter

Slipping on a pair of brown, heavy-duty work gloves and powering out of the doorway into the 24 degree air and onto the freshly snow-dusted sidewalk, he makes his way from the lobby of Wellers Hall to second floor Heide Hall. Destination: math class.

The red scooter – with a single notebook in the front basket labeled ‘Dan Sandow’ in slanted handwriting – pulled forward.

Sandow switched his scooter, which he relies on to get across campus, to full power. Making his way up the ramp from Wellers Hall, the wheels marked the snow with long streaks, replacing the impressions of footprints from the group ahead.

“Hey Dan!” a passing group called out as he motored past smiling, his thick glasses speckled with snow.

Fighting against the traffic of students getting out of class, Sandow reaches the automatic door opener of Heide Hall and heads straight for the elevator.

“It is a struggle because if you’re coming from Prairie Street, which is where I live and is the route I take most often, you just have to wait for people… or you run them over or whatever,” Sandow he said laughing.

Now in his sophomore year at UW-Whitewater, Sandow says he has a handful of strategies  he relies upon to negotiate life as a college student on wheels.

Arriving 10 minutes early for class, Sandow makes conversation with a classmate outside the door, occasionally stopping to return another enthusiastic hello to passing students.

Although this day marked the first snowfall of substance in November, Sandow donned only a layered causal jacket and jeans. All my body heat is here, Sandow said pointing to his chest, while wearing thick winter socks and tossing his gloves in the basket of is scooter.

But winter has just begun and Sandow makes sure he is fully prepared.

To winterize, Sandow gets a new battery for his scooter and gives it a full charge each night, even though he says it should be able to last two or three days. He also gets new tires for his manual wheelchair – which he uses occasionally – to make sure it has enough traction for the winter conditions.

“With any type of weather there’s a lot of things that people don’t know,” Sandow said. “I’m not wearing gloves just to wear gloves. I’m wearing them for a reason; a purpose. It’s because when I’m pushing I don’t want my hands to get all wet and slip – it’s better for traction. Whereas other people can just put their hands in their pockets and just be fine. We just have to prepare more for winter or rain.”

Sandow compared his scooter to driving a car in the sense that learning how to get through winter conditions is gained from experience and practice.

By the time class let out in Heide and Sandow was making his way back to Wellers, the sidewalks were fully cleared of snow.

Sandow said although the snow removal crew is “diligent,” he still wouldn’t recommend early morning classes in the winter in order to avoid any problems.

“There’s so much thinking that you have to factor in when you’re doing anything,” Sandow said. “I do everything for a purpose; I do everything because it works for me. And in my mind, I leave when I do because you don’t know how long the elevator is going to take or what the conditions are going to be.”

The Center for Students with Disabilities (CSD) encourages students to think ahead just as Sandow does.

Before registering for classes students are advised to develop their class schedule with weather conditions in mind. Students should visualize the path between buildings with six to 10 inches of snow and ice and talk to advisors to best develop a plan of action. Students who are part of CSD have priority registration dates to ensure this.

Once classes start, according to the CSD student Guide to Accessibility and Inclement Weather, it is important to make personal safely the first priority and use discretion when deciding to go to class in extreme conditions. Students also are advised to talk with faculty during the first week of class about potential tardiness that may arise.

“Part of what you have to think about too is that when you look around the community, each individual home is responsible for shoveling their sidewalk; each individual business is responsible to plow their sidewalks. And then the city and the counties plow their roads. On the Whitewater campus we have one crew that is managing all of our sidewalks and all of our parking lots, and partnering with the city to clear our crosswalks. That level of singular service dissipates as you graduate and you go off into the world. So, part of what we want is students really thinking about what is it going to be like in the community when [they] graduate from Whitewater… and [they] need to rely on their neighbor to shovel their sidewalks. A big part of what we want is students to have good planning, thinking and problem solving that’s beyond our office. We want this to be a lifelong skill.”

If snow removal ever hinders students with disabilities and their ability to get somewhere, CSD offers students a number to call (262-472-4711) in order to include the path of travel as part of the priority walkways.

CSD also offers Adaptive Transportation for students with disabilities that is popular in the winter months.

Adaptive Transportation is a fee-based pick-up and drop-off bus service that caters to the needs of UW-Whitewater students.

Although Dan Sandow used Adaptive Transportation last year due to the extreme winter, he said he usually opts for his scooter as it can power through most obstacles to get to class and his extracurricular activities.

Sandow is an active member of campus as a treasurer in the Disability Advocacy & Awareness Coalition (DAAC), which strives to promote universal design and inclusion for people with disabilities, and Best Buddies ambassador.

“It’s not ‘pity me’,” Sandow said. “It’s ‘I’m here on this earth for a reason and I have to embrace who I am.’ I’m a smartass and that’s who I am. I’m a funny, outgoing person. It’s not ‘pity me,’ it’s ‘what can I do to make the world a better place?’ Be optimistic about everything. Don’t give up on anything.”