Another year, another title 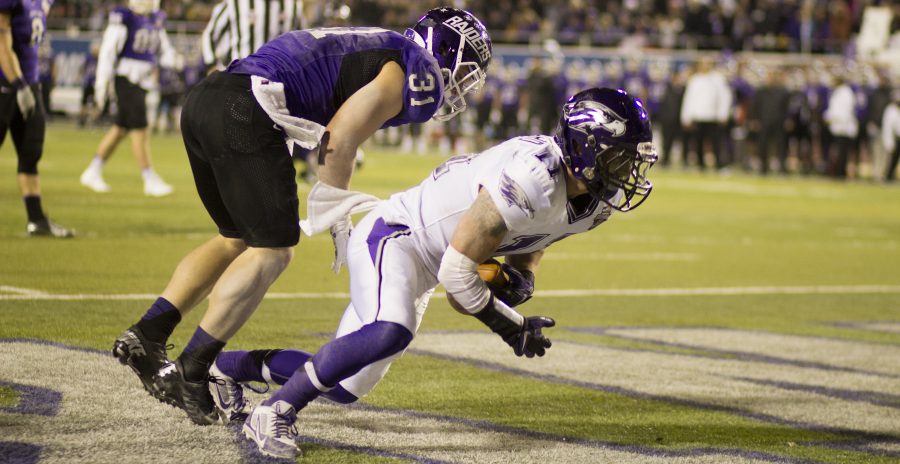 The Warhawks football team faced long-time rival, Mount Union University, for the ninth time in 10 years on Dec. 19 at the 2014 Stagg Bowl in Salem, Va., which ended in a familiar result for the ’Hawks: victory.

For the second year in a row, the No.1 ranked Warhawks reigned over the No. 3 ranked Purple Raiders – a team that crushed Wesley College 70-21 in the semifinals. This prompted Wesley head coach Mike Drass to predict Mount Union would “kick somebody’s (butt)” in the Stagg Bowl – to claim the NCAA Division III National Championship, this time by a score of 43-34.

“What an exciting game, and a great way to finish Division III football this season,” former UW-Whitewater head coach Lance Leipold said. “You can see how talented and explosive of a ball game it was. Tonight’s effort and battling shows the character of these young men, and I couldn’t be more proud to be their coach.”

Leipold accepted a head coaching position at D-I University of Buffalo three weeks before the Stagg Bowl, but requested to remain coaching at his alma mater until the ’Hawks finished its season. And although Leipold has always stressed the importance of keeping the focus on the team, his impressive record is hard to overlook.

After eight seasons as head coach for the ’Hawks, Leipold became the fastest coach to reach 100 wins in NCAA history and finished with a career record of 109-6, with as many national championship titles as losses (six).

“Coach [Leipold] – he’s unbelievable,” senior defensive back Marcus McLin said. “He deserves everything, every opportunity that’s coming for him. He said it was for us, but I think it was for him as well.”

In a true battle of D-III football supremacy, the two teams racked up a combined total of 1,068 offensive yards, just short of the Stagg Bowl record of 1,105.

Senior quarterback Matt Behrendt went 26-for-38 and a career-high 365 yards with two touchdowns, earning his second-consecutive Stagg Bowl’s Most Outstanding Player honor. Despite his contribution, Behrendt was quick to acknowledge the team.

“I just try to go out there and execute and do my job,” Behrendt said. “With all the playmakers around me, the defense that we have, the offensive line, they all come together in huge games and make me look a lot better than I am.”

The ’Hawks were able to capitalize on the two turnovers committed by the Purple Raiders to pull away with a 30-14 lead by halftime. They converted 72 percent on third down while possessing the ball for almost 22 minutes.

In a momentum-swinging third quarter, the Purple Raiders tacked on 17 unanswered points to put them ahead by one.

“They’re a good offense and they can get up and down the field, but it was a lot of what we were doing,” senior defensive back Brady Grayvold said. “We weren’t doing a lot of things right; I think we just got relaxed for a little bit. We just weren’t executing.”

Junior running back Dennis Moore ran a screen pass 75 yards for a touchdown to regain the ’Hawks’ lead for good, with 5:05 remaining in the third quarter

In addition to the explosive offense, the Warhawk defense came away with five turnovers to shift the momentum back its way.

Grayvold led the defense with a team-high eight tackles and returned an interception for a touchdown in the second-consecutive Stagg Bowl.

“I don’t even know if I was in the right coverage to be honest,” Grayvold said. “It’s always been ten other guys doing their jobs.”

With an efficient offense and a lockdown defense, the ’Hawks secured their sixth national title in eight years and extended its win streak to 32 games, good for the longest current streak in any division of college football.

“The thing that has helped us be as consistent as we’ve been is that we’ve stayed in the moment,” Leipold said. “We haven’t spent time looking in the rear at past accomplishments or things that haven’t gone our way, and we’ve never gotten too far ahead of ourselves. There are quality opponents out there. I think the bracket was very stacked this year with a lot of good football teams, and we had to fight our way through.”

For Leipold and the 11 graduating seniors, the 2014 Stagg Bowl will be the last battle they fight for the ’Hawks, but their legacy will continue to live on.