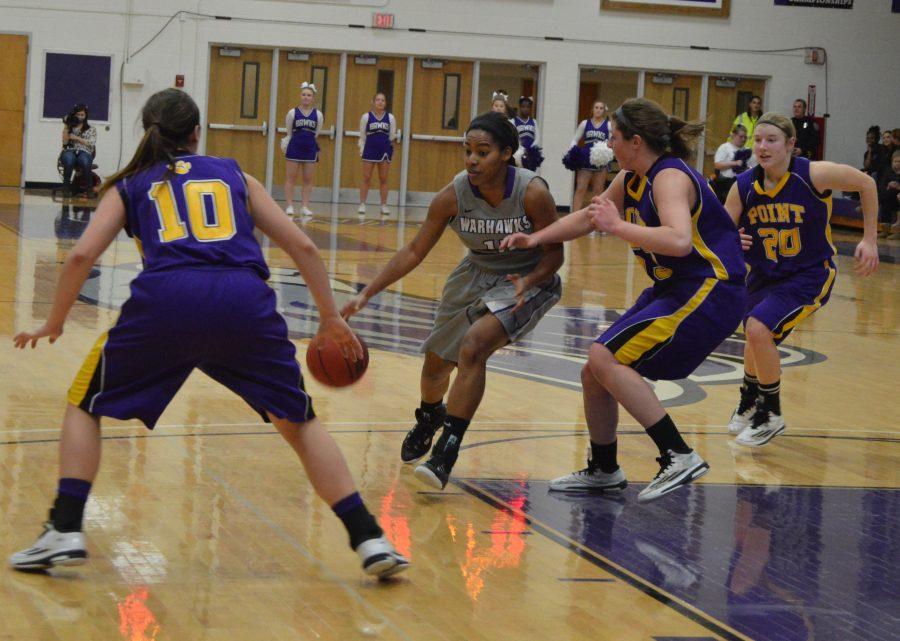 The women’s basketball team came away with a double-digit 64-52 home victory against the UW-Stevens Point Pointers on Feb. 11.

’Hawks junior guard Abbie Reeves had a big performance, tallying 15 while freshman Kate McKay had 11.  This was the second meeting between the two teams this season.

Warhawk’s head coach Keri Carollo and her coaching staff made a change to their starting lineup to match up with the Pointers.

Reeves liked the match up the ’Hawks saw throughout the game.

“We switched our starting lineup to match their larger lineup better,” Reeves said. “It really helped us match up better with them overall.  Our help rotation defense was great.  We rotated and got a few charges and steals, which allowed us to get out and push the ball.  Pushing the ball helped score easy layups and create better shots.”

Carollo added, “We shot the ball better, and played with a lot of passion and heart than in the past.”

Both sides teeter-tottered leads throughout the match up.  UW-SP maintained a lead early in the first half, but it only lasted a short three minutes as the ’Hawks evened the score.

UW-SP managed to put together a run half way through the first, expanding its lead to ten.

The ’Hawks then bounced back to narrow its deficit to one.

The teams went into the half with a point difference, 31-30, in favor of UW-Stevens Point.

Second half action continued to jump back and forth, as the lead changed five times before the ’Hawks settled down, holding a consistent lead from four minutes in.

Carollo liked the teams enthusiasm throughout.

“We performed well, we were focused and well prepared,” Carollo said. “Our game plan was good and we played at a high level.”

The ’Hawks were able to pull ahead to six points by the 15 minute mark, in the second, which then doubled only three and a half minutes later.

UW-W reached its largest lead of 14 points with six minutes remaining with a free throw by McKay.

The home team put together a solid run, closing out the game with a string of free throws.  The ’Hawks outscored its competition 34-21 in the second half.

The ’Hawks have only two remaining games in its regular season.

“We need to win out to help our chances of making the conference tournament,” Reeves said. “We want to continue playing great defense and getting out in transition.”

After the win against UW-River Falls, the ’Hawks have a 6-8 WIAC record, placing them in the sixth spot in conference play.

The Warhawks need to close out the season with wins to continue its advancement to the conference tournament.

The next matchup is against conference rival No. 20 UW-Oshkosh.  The game is set for 7 p.m. on Feb. 18 at the Kolf Center in Oshkosh, Wisconsin.