Stand up, speak out, make a difference

Gov. Scott Walker proposed a 2015-17  budget plan on Feb. 3 to cut UW System funding by $150 million annually. Since then, there has been a widespread conversation and concern over the future of the UW System.

In an email sent to UW-Whitewater students on Feb. 4, Chancellor Richard Telfer explained the university would take a hard hit to funding “used to support the core mission of the university.”

So far, students and staff alike are concerned about an eventual sky-rocket in tuition, staff layoffs, increased class sizes and many other issues that threaten the quality of higher education over the course of the next few years. 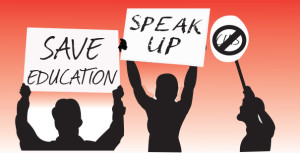 These terrifying proposals have scared and outraged many people across the state.

“I realize this may make you feel helpless,” Telfer said in the announcement. “However, the beauty of democracy is that we all have a voice. I would encourage you to use that voice.”

The chancellor’s words are absolutely critical to take into account at a time like this. Oftentimes as college students, we feel powerless to make a change concerning politics.

As we’ve all heard before however, there is power in numbers. If every single person who wanted to speak out actually did, there would be a collective protest that would speak much louder and gain more attention than a small Facebook rant or personal conversation followed by an “oh well” attitude.

In 2011, there was a huge series of protests against Walker’s Budget Repair Bill. The collective response was so large that it was reported on throughout the nation and initiated the recall election. Although the recall was not successful, it was undeniable that the protester’s voices were heard and it encouraged an attempt to change.

Just because the recall was not successful does not mean we should keep silent about the 2015-17 biennium budget, and we should try to make a difference before anything is official and permanent.

The first step is educating yourself on the issue and the consequences. Don’t just listen to a single opinion or read a single article or watch a single news segment on TV about it. Learn, and make your own decisions based on the facts. Question everything.

The second step is to contact local representatives and make your opinions heard. Become involved with local movements and pay attention to any gatherings or demonstrations. Have conversations with friends and encourage them to get involved.

Another thing to consider is social media. Although simply posting a status won’t do much, organizing rallies and starting the conversation and spreading it to others will benefit the cause.

Social media, if used correctly, can be a great tool to bring attention to the issue and get others motivated to talk about it, use their voices and make a change.

A local example is the rally taking place Thursday, Feb. 19 at 6 p.m. Organized through a combination of social media and word-of-mouth, this gives students, faculty and the entire Whitewater community an opportunity to voice their opinions on the budget.

This budget hurts our professors as well as the current and incoming students. Harming higher education threatens the entire economy because higher education is becoming increasingly important in today’s society.

We can’t have the entire country working to make higher education affordable and accessible while increasing the complications here in the state.

If we don’t speak up, nothing will change.

The U.S. was founded on the idea that the government works for the people, not that it controls them. They can only do what we allow them to, and without standing up and speaking out, we are passively allowing them to implement harmful changes to the UW System and higher education as a whole.