Sophomore Katie Fiorilli took the top spot in three events, including the all-around competition. The other two top performances came on the vault and on the balance beam.

“I just wanted to have fun and improve from the last meet,” Fiorilli said, regarding her mindset going into Friday’s meet. “I wasn’t really worried about the score.” 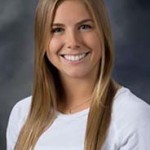 Fiorilli, whose 9.700 tied the 12th-best score in program history, was one of five Warhawks in the top-six on the vault.

Junior Hannah Lee and freshman Lewa Evans placed fifth and sixth with scores of 9.475 and 9.450, adding to the team’s vault total of 47.750. The total tied for the team’s ninth-best in program history.

On the balance beam, only three Warhawks placed within the top-5.

Fiorilli led the event with a score of 9.500, followed by Kristen Shackleton with a 9.400. Lee finished the event tied for fourth with her score of 9.050.

There were also only three Warhawks in the top six of the floor routine, with Pickett coming in second with a score of 9.375.

Senior Cici Talcott was the highest placed Warhawk on the uneven bars, finishing third with a score of 9.400. Sophomore Grayson Esslinger finished sixth with a 9.225.

“I felt like that helped me throughout the meet, and the entire team.”

Fiorilli also spoke about the improvements she felt she made in the meet after the previous one.

“I wanted to improve on my individual skills,” she said. “Just trying to me more solid. I think I fixed my vault a little better than the last meet.”

Heuer felt that the meet was a great learning experience.

“We had to learn to pull together and found out our weaknesses,” Heuer said. “Now we are more motivated than ever to get back in the gym and work hard to improve our routines.”

When talking about the team’s success throughout the season, Fiorilli credited the coaching staff’s ability to prepare and encourage the team.

The Warhawks next meet is Feb. 28 against UW-Oshkosh. During the meet, the Warhawks will honor the team’s seniors.

“We have to start to change our mentality,” Fiorilli said. “We’re getting closer to the conference meet, so we need to take this meet and approach it as practice for the bigger meet.”