‘Privilege’ exists and you need to check it

This is a statement many of us have heard, but few recognize the significance of it or take the time to consider what it means. In fact, too often this statement is used ironically to make fun of those who say it. This is most likely due to the lack of understanding of the message.

Checking your privilege means looking at several identities you hold and realizing that some of them work to benefit you better than other individuals who do not identify the same.

This is not limited to just race; this includes gender, sexual orientation, ability status and many other identities that are, quite often, out of your control. Understanding privilege and the effect it can have on yourself as well as others is critical in order to create a more equal and sympathetic
society.

For example, a wealthy, straight, able-bodied, white male is highly privileged in our society because, simply by these identities, he has an easier time with opportunities throughout his life and has a voice that more people are likely to listen to. 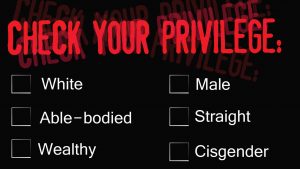 That is not to say that there are not powerful black women or powerless white men, but in general, it’s not hard to see the privilege the white man holds over people with a minority status of any identity.

Nearing the end of Black History Month, people have probably heard over the past few weeks comments such as “but what about White History Month?” and “isn’t that reverse racism?” These kinds of statements are exactly why people need to check their privilege.

Everyone has different life experiences. This article does not aim to say that anyone with white skin is rich and has never faced challenges; however, many people do not realize how much power race can hold in society.

Here on campus, 4.6 percent of enrolled students identify as ‘African American’ while 83.6 percent identify as ‘White,’ similar to the entire UW System which is 3.1 percent and 79.9 percent respectively, according to a UW System 2014-15 student statistics headcount enrollment report.

Is this because more white people choose college than black people do? Of course not. This is because, despite affirmative action and specific scholarships dedicated to minorities, it is still harder for those individuals to get into college than it is for their white counterparts.

Diversity is a word heard ubiquitously around campus from the moment you apply to the moment you graduate. “We are all purple.” We are different, but we are the same. All of this is used to promote and advocate equality, and yet, so many students are unaware of privilege versus equality and how to participate in the conversation.

It seems as though many are apathetic to the struggles of communities outside their own. Think about things you may take for granted in a day-to-day situation that others don’t have the luxury of experiencing.

For example: The elevator is broken in your residence hall. That sucks. Now you have to take the stairs up three flights. Here’s where the privilege comes in: you are able to use the stairs. Those who are not able-bodied may rely on the elevator and could face massive challenges if one were to break down.

Ignorance is not, in fact, bliss. Ignorance, in this case, is the oppression of others based on your inability to realize you may have more benefits based on factors you, and other people as well, cannot control.

So, if you are privileged, take this into consideration: You can use your voice and benefits for good. Be an activist. Speak on behalf of those whose voices are muted by the privileged. Make a difference, because you have the power to do so. And most importantly—be thankful for the privileges you have, and don’t take them for granted.