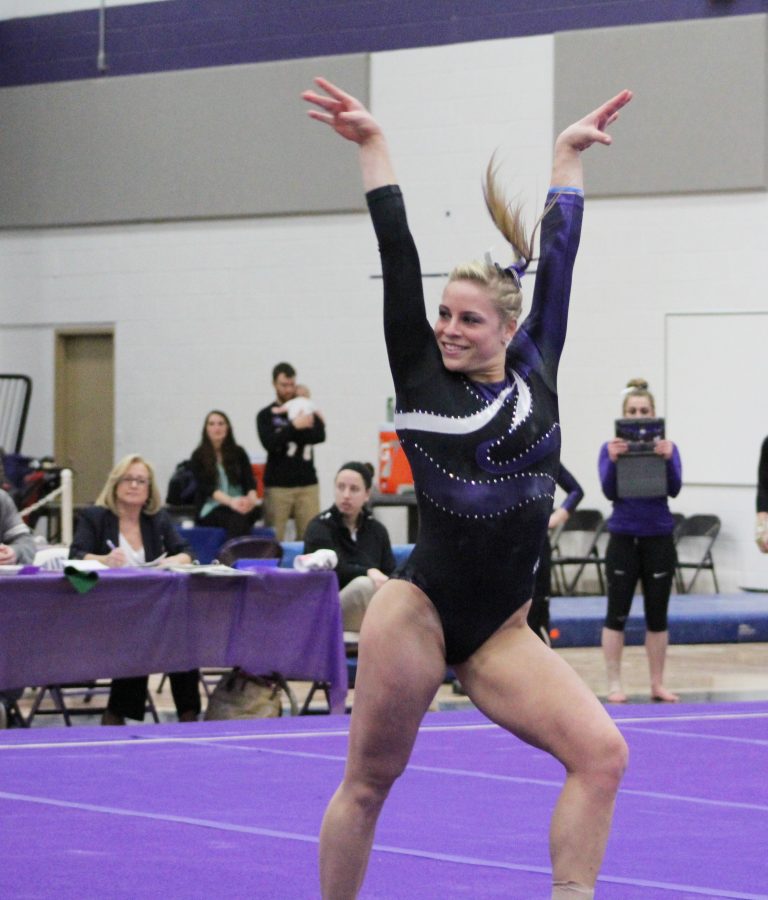 The UW-Whitewater gymnastics team closed out the regular season beating UW-Oshkosh 189.650-186.950 on Feb 28 in its final home meet of the season.

Head coach Jennifer Regan gave her thoughts on the meet.

“I think there were improvements as we went on,” Regan said.” We finished the meet strong, and that’s just the character of this team.”

The Warhawks started the meet on the vault where sophomore Katie Fiorilli won the event, and recorded her second-best vault score of the season with a score of 9.725.

’Hawks swept the top four spots on the uneven bars during the second rotation, led by Fiorilli with her season-best score of 9.625. Pickett finished second with a 9.600, followed by sophomore Grayson Esslinger in third with a 9.575 and senior Cici Talcott tying for fourth with a score of 9.525.

During the third rotation, the Warhawks were forced to count falls on the beam.

It was during the floor routine where the Warhawks cemented its lead and ultimately the meet.

Evans and Heuer both registered their season-best scores on the floor with a 9.775, which gave them a tie for first place.

In the all-around, Fiorilli and Pickett finshed second and third respectively with scores of 37.600 and 37.100.

“Today was all about fun,” Regan said. “It was all about the seniors and having fun. It’s the last home meet, so just enjoy the moment. That’s what we were focused on.”

Talcott spoke about how she bounced back from the first rotation of the meet.

“Our first event was vault, and I fell on that one,” Talcott said. “But I really tried to pick myself back up because I had two more events to perform for the team.”

Talcott, along with Stephanie Cross, Jen McKiernan and Alexis Williams, were all honored after the meet as part of senior night.

Talcott said that the significance of it being her last home meet did play a role in her mindset.

“I always take meets seriously,” Talcott said. “But this one I took it even more seriously since this was literally the last time I’d perform here. It’s a huge deal to be a part of this program.”

Talcott also spoke about her experiences during her four years on the team.

“Of course winning nationals three times in a row,” Talcott said. “I can remember each one of those national championship meets so well.”

Regan is not worried about any potential sense of complacency   during the layoff until the WIAC meet.

“We’re going to get back in the gym and work on the little things,” Regan said. “Build their confidence, make the improvements we need to make. So right now it’s just the little details.”

Talcott didn’t think that the team would get complacent at all.

“I think we’ll be fine,” Talcott said. “I think the week off will help us rest a little bit and help our bodies get back to where they need to be.”