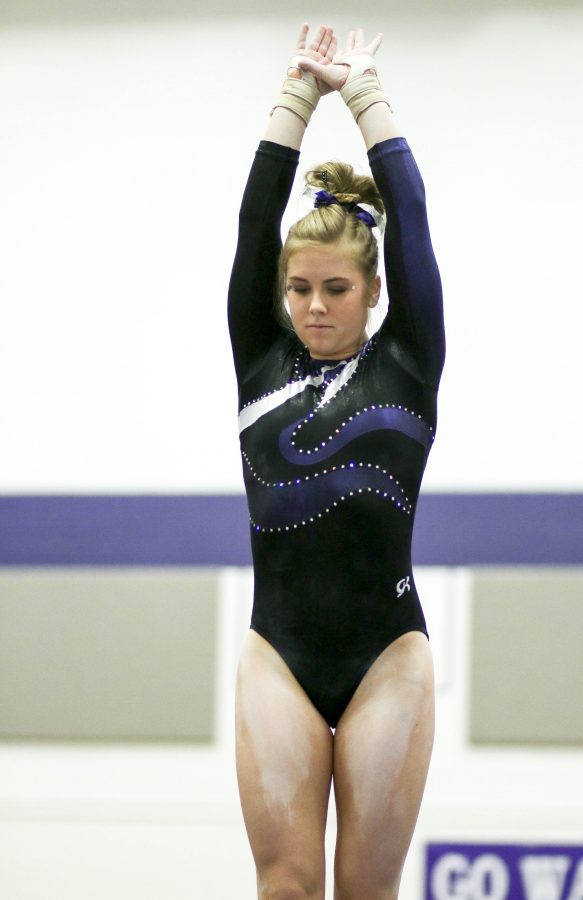 The UW-Whitewater Gymnastics team traveled to La Crosse for the National Collegiate Gymnastics Association Division III Championships, and tied for second on March 27.

The Warhawks, who tied with Ursinus College (PA), tallied a team score of 191.225. The total was just three-tenths of a point behind the first place UW-La Crosse team. The team’s score was also the fourth-best total score in program history.

“I’m so proud of my team,” junior Hannah Lee said. “I can’t wait until next year.”

The meet started for the Warhawks on the uneven bars, where freshman Caroline Holverson led off with a score of 9.450.

Senior Stephanie Cross scored a 9.550, followed by sophomore Grayson Esslinger with a 9.650 which would be the highest event score of the night.

Sophomores Courtney Pickett and Katie Fiorilli, with a 9.500 and a 9.525 respectively, assured that the Warhawks would finish the event with top-five gymnasts.

In the next rotation, the Warhawks were forced to count falls on the beam.

Senior Alexis Williams, with her best beam routine in her career with a 9.725, led the Warhawks in the event.

The Warhawks then had a bye rotation, afterwards moving to the floor routine.

Senior Cici Talcott, along with Pickett, tied for first in the event with respective scores of 9.700 each.

Following the floor routine, the ’Hawks ended the night on the vault, which would prove to be the team’s best event of the night.

Fiorilli led the team with a 9.825, setting the top vault score in the championship meet’s history and a new school record in the process.

The total was the best score ever recorded by a group of five Warhawks on the vault.

Fiorilli, who became the only Warhawk in the UW-W gymnastics history to win a national title in the all-around last year, won the all-around again this year. Her score of 38.475 tied for the second best in program history.

Pickett finished second in the all-around with a total of 38.400, a score that also was a top ten result in the UW-Whitewater record book.

“Of course we would have loved to bring home a national title,” Lee said. “But that’s never been the main goal. Our goal is, and always will be, to compete with our hearts, enjoy the moment, and be behind each other no matter what. In that sense, the competition couldn’t have gone better.”

Fiorilli, who won titles on vault and uneven bars on Saturday, made it four career individual national championships in just two years.

Fiorilli was named Co-NACGC West Region Gynast of the Year for the second straight season, and Talcott shared NCGA Outstanding Senior Athlete of the Year honors. With that honor, Talcott becomes only the second Warhawk to accomplish such a feat.