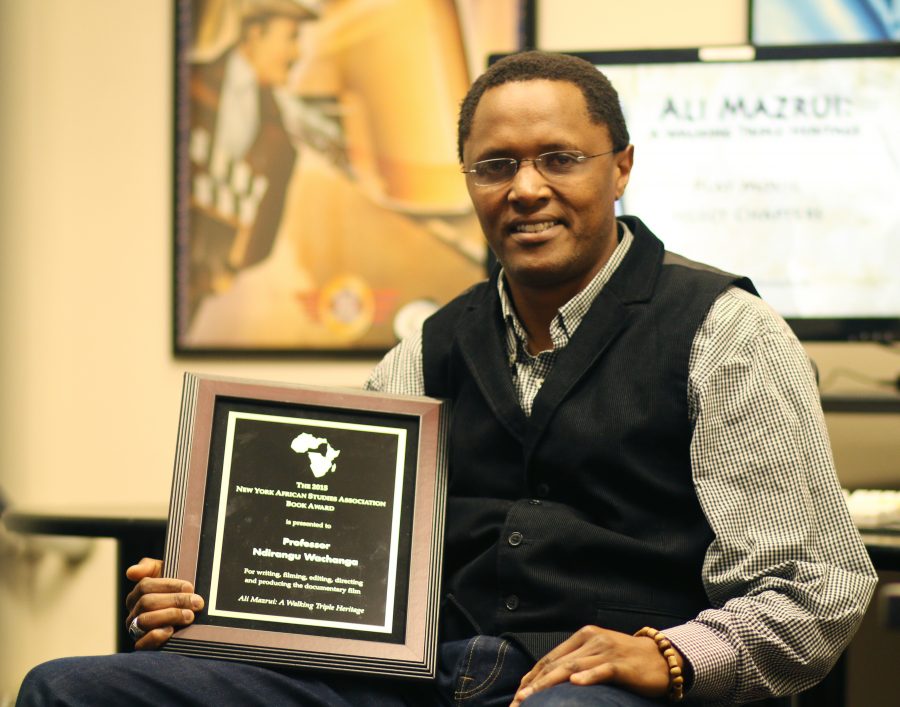 D. Ndirangu Wachanga, associate professor of communication, is the first person to receive the 2015 Book Award for a documentary film.
The documentary, titled “Ali Mazrui: A Walking Triple Heritage,” was a seven-year long project that highlights the life and works of Professor Ali Mazrui, a prominent African scholar from Kenya.
“[Mazuri] was regarded as an African intellectual sage,” Michigan State University Associate Professor Dr. Folu Ogundimu said. “He was a foundational scholar for Africa… he left a tremendous footprint on many areas of African studies.”
The Book Award is a prestigious award given by the New York African Studies Association and previous recipients are some of the leading figures in Africana scholarship.
“Wachanga made a transformational documentary in the sense that the subject matter itself was transformational,” Ogundimu said.  “… It was quite profound and I think African studies scholars saw that when awarding their prize.”
The 74-minute documentary is the first in a series of documentaries Wachanga, a native of Kenya, is planning to create, all of which are meant to preserve and document the memory of East Africa.
Wachanga said he sees himself as, fundamentally, a storyteller.
“I tell my students: Sometimes it’s not what we say, but how what we say is going to be interpreted,” Wachanga said. “Sometimes it is not so important what we see, but what is more important is how do we interpret what we see. So, for me as a storyteller I am very, very careful in terms of how do I communicate my story.”
While researching underground media in Africa for his dissertation at the University of North Texas, he found holes where documents were lost or destroyed. Places where the story he wanted to tell were missing. This paved the way for the information scientist to pursue testimonials in order to capture real voices and find, once again, the memories far suppressed in the absence of archives.
Princeton English Professor and mentor Simon Gikandi played a role in the documentary, where he reflects on his relationships with the subjects as he knew them in Africa and when they moved out, as well as to provokes further questions.
“I personally know a lot of the people he is working on, or I knew a lot of people that could tell him stories about the people he is interested in,” Gikandi said. So, in a sense, the mentorship started first as me being a source of information for him – someone who could connect him. Especially through the generational problems because he is a young scholar and most of the people he is writing about are in their 70s and I happen to be somewhere in between.”
Wachanga said his documentary wouldn’t be what it is today without the support of the Dean of Arts and Communications Mark McPhail, the Communications Department, and UW-W TV Director Jim Mead allowing access to the editing studio and student volunteers Ben Bannow and Alisha Bade.
“It was a humbling experience,” Wachanga said. “Especially because I did not want to be presented as a special person, but I wanted to be a member of the collective effort that was behind the production of this film.”
In 2014, the Royal Purple ran a story detailing the production of the documentary film.
“You really have to be inspired by that topic to be able to spend that much time on it, and he was really committed,” Mead said in a Royal Purple article from May 7, 2014.
The film has been screened in part at UW-Madison, Princeton, Yale, Cornell, Rutgers, Wits University (South Africa) and Abat Oliba CEU University (Barcelona). It has not yet been shown at UW-Whitewater.
Wachanga is the authorized documentary biographer of Mazrui and Ngugi wa Thiong’o, which is the subject of his ongoing project holding the working title of “Ngugi wa Thiong’o: The River Between Indigenous and Colonial Languages.”
“The people he is interviewing are very important because they are part of the disappearing generation of Africans who were the most important in the sense that they were the first generation of Africans after colonialism,” Gikandi said. “They are very significant and they are slowly dying. As in the case of Ali Mazrui, after the documentary was done, he died. So, these documentaries are very important in terms of memorializing those intellectuals.”
Currently Wachanga is in contact with East African Educational Publishers to edit a volume of essays in honor of Mazrui, who died at the age of 81 this past October.
In the past month, Wachanga has recently appeared as a commentator for BBC Swahili TV.