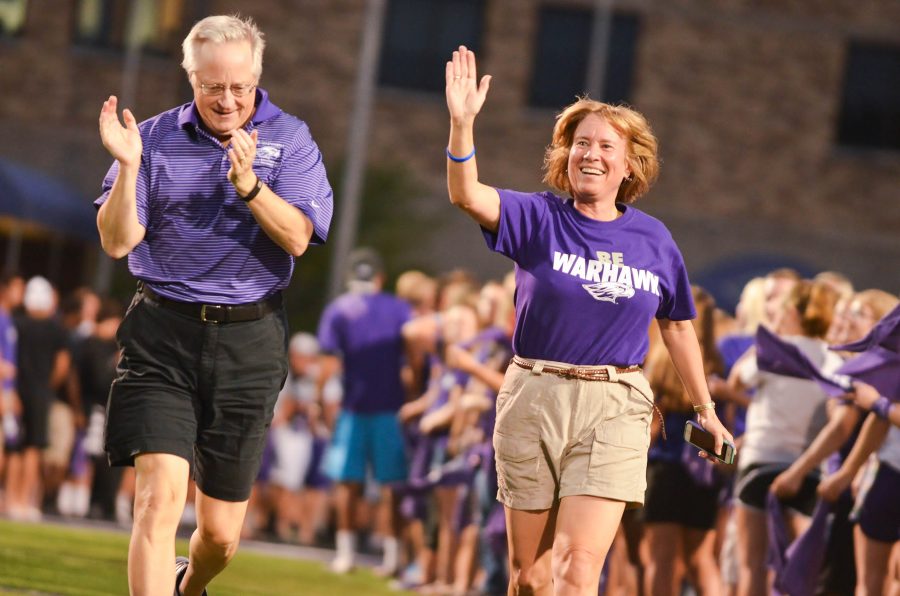 UW-Whitewater Chancellor Beverly Kopper and interim provost John Stone run through Perkins Stadium before students. Incoming freshman found themselves being swept up into their welcome activities after their arrival on campus on Sunday, August 30. Club U Dub Dub got students interacting with their peers and made them a part of the "Warhawk family" by participating in the R U Purple rally, running through Perkins Stadium and painting Warhawk Drive purple. They finished off the night by attending Club 1868. Photo by Aaron Gottschalk.

Chancellor Beverly Kopper has a closet overflowing with purple.

It’s not all Warhawk purple, she admits, but the days she’s not donning one of the many shades of the color, she’s almost invisible.

“One of my co-workers saw me today not wearing purple and said I was almost unrecognizable,” Kopper said.

Wearing the color daily is just one of the ways Kopper shows her love and enthusiasm for UW-Whitewater.

Kopper was named chancellor in late May to replace former chancellor Richard Telfer, who announced his retirement in November 2014.

She was hired at UW-W in 2010 as provost and vice chancellor for Academic Affairs.

“Some of the responsibilities are similar,” she said. “I’ve had the opportunity to be out with some of our alumni and donors, as well as spending time on campus.”

Spending two months meeting with faculty, alumni and legislators to talk about UW-W and the challenges it faces due to the $125 million cut to the UW System in the ’15-17 biennial budget, Kopper has kept her calendar plenty full.

While her schedule will become a balancing act of engaging with students through event attendance and the time spent off campus when classes start, student arrival is an event Kopper said she was looking forward to during an interview in mid-August.

“I’m anxiously waiting for all the students to come back,” she said. “ … There’s just a sense of energy on campus that you just feel.”

Kopper’s new vision for UW-W  is one that is shared, and has had cross-campus input on how to improve and move forward.

A task force will be launched this fall on how the university can manage the budget cuts, and goals will be made on how to close the equity gap between underrepresented minority students, creating institutional diversity within the faculty and a focus on how student advising can be improved.

Kopper first came to Whitewater on a cold, windy day in November of 2009.

“A windy Friday the 13th, in 2009, I picked her up in front of the Baymont Inn to interview as provost for this university,” Stone said as he introduced Kopper to the stage during the State of the University address on August 24. “She has distinguished herself in every way, placing value on the notion of building community. She has lived the UW-Whitewater family motto.”

Kopper took the microphone after the applause, saying Friday the 13th is now one of her favorite days.

Prior to being hired as a UW-W provost in 2010, Kopper earned her bachelor’s degree in psychology from University of Buffalo, and continued her education at UW-Madison, earning a master’s in social work and psychology.

Kopper then earned her Ph.D in counseling at Iowa State, where she then proceeded to work at University of Northern Iowa, working her way from a faculty member to part of the administration.

Kopper said it was the love of higher education’s dedication to student success and the innovative spirit on college campuses that pushed her toward a career in a university setting, and it’s those same things that brought – and kept – her here at UW-W.

On her first day as chancellor, Kopper worked to establish “a new normal” on campus.

Holding an open forum on the morning of that first day, 100 faculty and community members showed up.

“The campus is really interested in what she has to say, and what her plans are for us,” said Sara Kuhl, Marketing and Media Relations director at UW-W.

Kopper also held “Tea with the Chancellor” sessions throughout the summer. It’s something she said she’ll be continuing throughout her first year.

“This is really important because I want to be able to see all of you and keep you updated on the critical issues that we’re facing,” Kopper said.

“I have plenty of tea on standby in my office, drawers and drawers. Some days I look like a cafe.”

Coffee drinkers are still invited to bring their concerns to the chancellor–she has coffee on hand as well.

One of the biggest changes Kopper has seen in herself is she “probably travels more,” thanks to the amount of alumni, donors and legislators she meets with off campus in order to “energize our allies.”

When she is on campus, she finds herself meeting with the leadership teams of each department at the university as she works to get to know people on a different level.

Juggling the duties of chancellor has come mostly easy to Kopper, Kuhl said, but has its limitations.

“She’s had to say no to some things, because there’s only 24 hours in a day and she needs to have a little bit of time with her family,” Kuhl said. “I think she’s done an amazing job of handling the demands that are out there for her.

“She’s just very cheerful, and oozes excitement for who we are,” she added. “The passion she has for UW-Whitewater is amazing, and I think it’s going to be contagious.”

As Telfer could be easily seen around campus at events, Kopper is planning on cultivating the same kind of community involvement.

“Both of us liked to be very involved on campus,” she said. “Certainly Dr. Telfer was an avid supporter of athletics, and I am as well. I just love being out at student concerts and performances and faculty events. It’s the vibrancy of this campus.”

A vision for campus

Whitewater’s campus has always had a family feel for Kopper.

She says it’s “critical” to keep it that way.

In her State of the University address, she talked about the challenges and successes UW-W has accumulated since the last campus address.

One of the biggest challenges UW-W faces is the decrease in state aid in the biennial budget, but Kopper put the minds of many faculty and staff in the audience to ease, as she told them there was no plans for layoffs, job outsourcing or early retirement incentives.

She announced one way UW-W will “weather to the budget cuts” is the launch of a task force whose main initiatives will be to manage the budget cuts’ affect on campus and look for more innovative practices that will cut costs without eliminating quality for students and staff.

“We need to remain a university that is laser-focused on student success,” Kopper said. “That means we need to have a shared vision of excellence that really transcends all boundaries, where everyone is reinforced for their contributions to UW-Whitewater.”

The task force will develop key performance indicators to track the progress of the goals set and ensure that short-term goals match up with the university’s long-term vision.

Academic freedom and the preservation of tenure is also a part of the budget plan that Kopper said she, along with the UW System President Ray Cross, is dedicated to protecting, despite new wording changes from lawmakers.

Her stance on tenure got a small burst of applause from a faculty member in one of the front rows.

Another solution to the budget deficit will be to raise out-of-state and graduate tuition up 2-3 percent from last year, a move that will generate $800,000 in order to minimize the blow of a $125 million cut.

This plan comes with problems, completely out of the university’s control, however.

Kopper talked about how UW-W relies heavily on its enrollment and retention for funding, but is already at a student housing over-capacity. The university has lost transfer students due to not being able to have places for them to stay on campus, and will have 170 incoming students living in lounges at the beginning of the school year.

Yet with the budget cuts, building renovations and new construction have either been halted or severely delayed due to a lack of state funding.

The State of the University address wasn’t all negative, however; Kopper said there’s plenty to be celebrated.

The class of 2019, which had a record amount of applicants, totaling 7,200 in all, will be starting this week as the class to have the highest ACT average of any class before them. Out of the 2,100 members of the incoming freshman, 16 percent identify as under-represented minorities, and 18 percent are from out of state.

Retention rates from the class of 2018, this year’s sophomore class, are also slightly above 80 percent for the second year in a row, and graduation rates within a six-year time frame are nearing 60 percent.

The rates are “outstanding” and are above national rates, Kopper said.

The highest priority in Kopper’s vision for the campus, however, is never compromising the student experience as the university works to find ways around the challenges they face.

“We have a very special sense of family here that we will protect,” she said.