Seniors roll on the ground 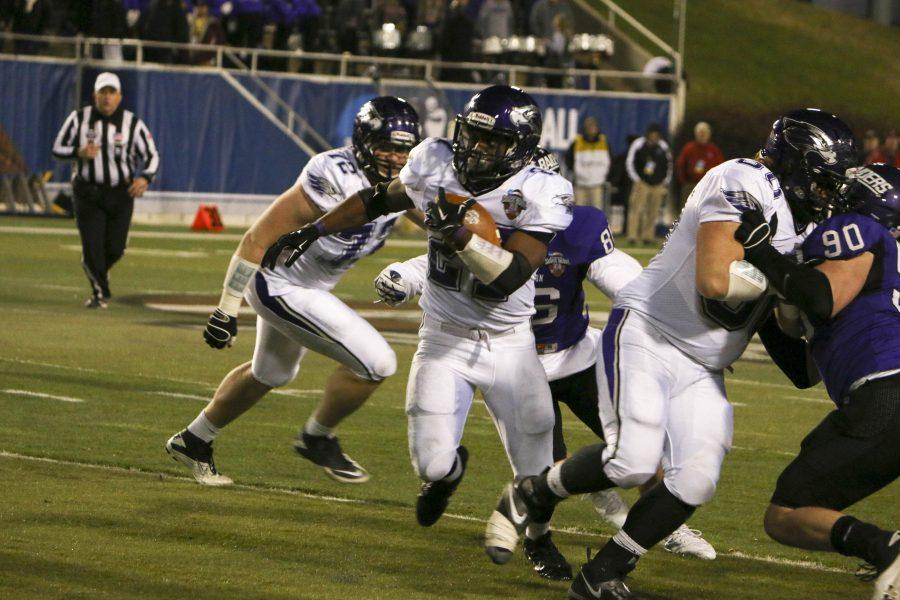 If the season opener is any indication of how the rest of the Warhawks’ season is going to play out, it’s likely the team could add another trophy to its already-stocked case.
After a bye last week, the Warhawk football team traveled to Jackson, Mississippi Sept. 12 to begin its 2015 season against Belhaven University, crushing the Blazers by a one-sided score of 62-6.
“It felt good to get back out there,” senior running back Jordan Ratliffe said. “It felt good to finally go against someone else other than our own teammates. A lot of guys came out with a lot of energy, really excited to get back out there. It felt really good to finally play again.”
The victory marked the first for head coach Kevin Bullis, who spent the last seven seasons as a defensive assistant under Lance Leipold before taking the reins in January.
“It’s a little bit surreal,” Bullis said of his first win. “It’s an honor to be in this role and serve UWW and the players and the coaches.”
While the ’Hawks return seven starters on both sides of the ball, the Blazers started 12 freshmen in Saturday’s contest, as 2015 marks Belhaven’s inaugural season in Division-III.
“Belhaven is a developing team,” Bullis said. “Coach Mumme is really only in his second year there. They’re building. Not that we aren’t building, you’re always in a building process, but they’re in the early phases.”
The ’Hawks accumulated 372 yards of total offense, 302 of which came from the ground game, while the defense allowed just 187 yards and forced three turnovers against the Blazers.
Ratliffe led the backfield with 103 yards and two touchdowns on 10 carries, tallying his 10th career 100-yard rushing game.
Senior running backs Dennis Moore and Nick Patterson also got in on the action, scoring one and two touchdowns, respectively.
Even freshman running back Tyler Glass tacked on six points on a six-yard run as well.
“Everybody that went on the bus was able to get an opportunity to play, and that’s the positive part: the continual development of our younger players,” Bullis said. “There were some young kids that got an opportunity to get baptized into college football.”
In his debut start for the ’Hawks, junior quarterback Chris Nelson completed six of nine passes for 58 yards. His lone touchdown of the day was a two-yard reception by junior tight end Brent Campbell.
“Chris had a fantastic game,” Bullis said. “His decision-making was awesome, and for a first college start, it was very impressive. So we’re very excited about Chris.”
After losing All-American and All-WIAC defensive backs to graduation, the Warhawks’ secondary was considered a question mark heading into this season.
But junior defensive back Vince Mason and sophomore defensive back JD Marconi proved the secondary can pull its own weight, as they each grabbed an interception from Belhaven quarterback Clayton Webb.
Although the statistics favored the Warhawks, Bullis said the team still has to make some improvements.
“People look at the score and see 62-6 and say, ‘Wow, the Warhawks are hitting on every cylinder,’” Bullis said. “We had opportunities to make a few more plays with interceptions, and we didn’t really follow through on them as well as we need to. That’s going to become more vital especially when you get to a tight game.”
Coming up, the ’Hawks will face another team new to D-III, but Ratliffe said they aren’t going to take any team lightly and the preparation will not be any different.
“We just want to get better every day,” Ratliffe said. “We just want to stay consistent; it’s what coach Bullis harps on. Just worry about us, don’t worry about Belhaven. That’s what we did: we came out there worrying about just us, and I think that’s what helped us get the win.”
The ’Hawks’ season home opener is scheduled for 1 p.m. Sept. 19 at Perkins Stadium against Finlandia University (Hancock, Michigan).