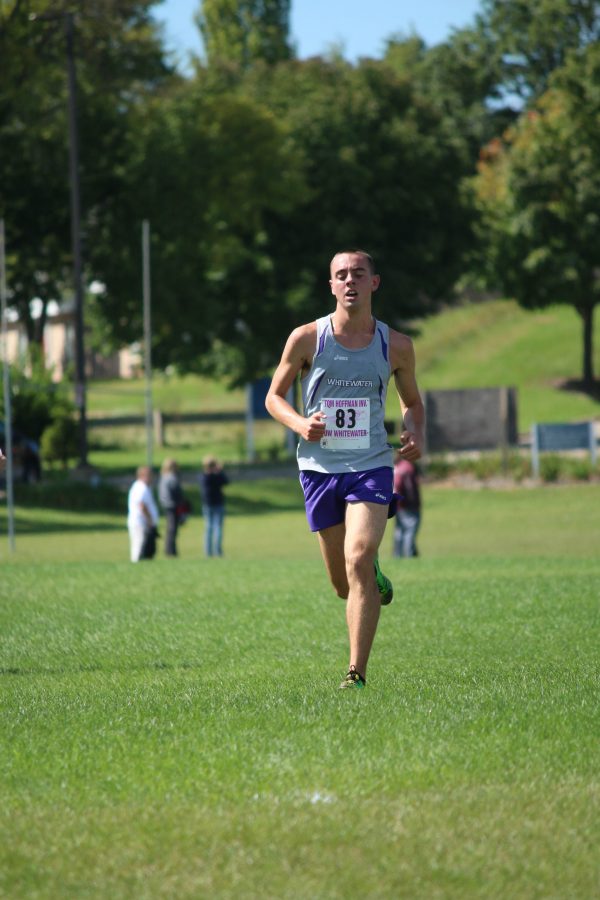 The Warhawks’ men and women’s cross country teams competed in what used to be called the Warhawk Invitational this past Saturday to kick off its 2015 seasons.

This year, however, the meet was officially renamed as the Tom Hoffman Invitational, after one of the most accomplished runners in school history and Hall of Fame inductee.

Hoffman graduated in 1970, but not before capturing three Wisconsin State University Conference championship titles and two NAIA All-American honors. He also qualified for the U.S. Olympic Trials in the marathon three times, including 1972 ,when he finished eighth.

Following Saturday’s meet, Hoffman was formally recognized as part of the 2015 UW-Whitewater Athletics Hall of Fame, along with other cross country runners Ryan Meissen and Stephanie Greiber.

Men’s team wins it all

The men’s squad took the first spot out of eight teams in their season home opener, despite the loss of 2014 national qualifier Dawson Miller. Sophomore Brett Harms led the ’Hawks, placing first out of 95 runners.

Last season, Harms became the ’Hawks’ most consistent No. 2 finisher and placed 38th at the WIAC Championship and 49th at the NCAA Regional meet. His recorded time at the regional race secured the No. 23 personal best time in school history.

Seniors Tony Urbanski and Kent Miehe rounded out the Hawks in the top 10, placing eighth and ninth, respectively.

The women’s team finished fourth out of seven teams, led by seniors Amy Kahl and Emily Kahl, who placed sixth and seventh, respectively.

Amy Kahl earned All-WIAC and All-Midwest Region honors in 2014, while leading the Warhawks in each meet. She also recorded the No. 3 best personal time in school history, while Emily Kahl holds the 10th best personal time. Both records were established last year.

The seniors were also honored following the race as part of their final home meet.

The men’s squad will lose four to graduation after this season, and the women will lose five.

The ’Hawks will compete in four more meets before the WIAC Championships, the next one being the Brissman-Lundeen Invitational on Sept. 25 in Rock Island, Illinois.