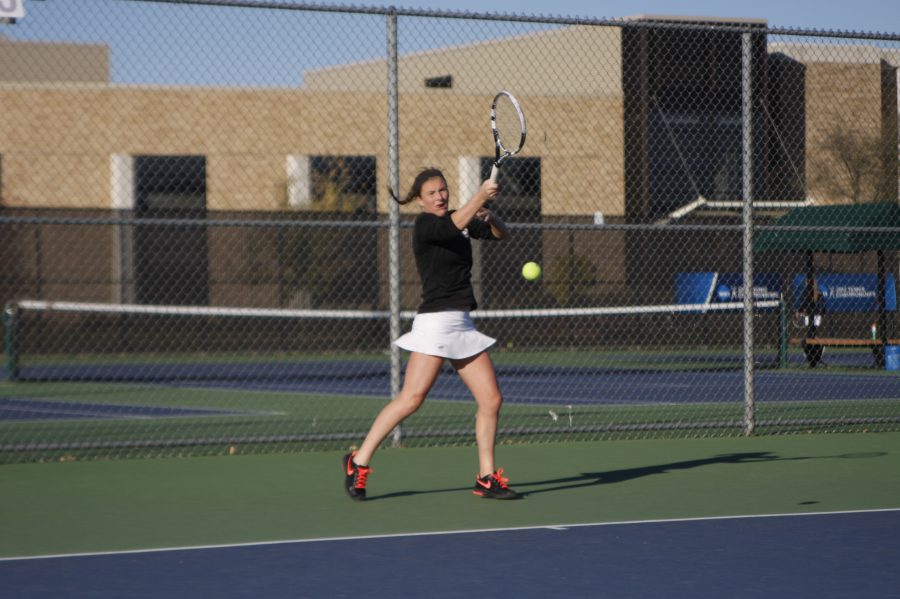 The UW-Whitewater women’s tennis team set new standards for the program this week at the National Small College Championship, earning its first ever win in doubles, finishing seventh overall.

The doubles team of sophomores Alicia Beck and Jillian Wallace had a difficult time adjusting to the higher level of competition, dropping both of their matches on the first day. They would find their stride in day two of the competition, however, and were able to finish strong, defeating Aly Coran and Rebecca Ho of Washington University in St. Louis (Missouri) by a score of 7-5, 6-2.

“Once we had a couple losses, to turn it around and get a win, and not let the first two losses get them (Beck and Wallace) down…you could tell that they went out in that match and they wanted it more,” head coach Frank Barnes said.

That desire and mental toughness were the keys to success for the Warhawks, according to Barnes. He made it very clear to his team that at this level of competition, things are different, and as he puts it, “any win is a good win.”

Megan Humphreys had a few “good” wins of her own, earning fifth-place honors in the singles draw.

“Once she [Humphreys] settled in, the second match was unbelievable,” Barnes said of her performance. “She really responded well… once she had that loss under her belt.”

It was nothing new for Humphreys, who has been competing in the national tournament for three years in a row.

While the Warhawks’ best were competing on the national stage, assistant coach Byron Balkin was busy with back-to-back conference matches. Despite being short-handed, the team swept both River Falls and Stout, pushing its conference win streak to 70.

Balkin said the streak is not something they share with the players.

“The streak itself, it shows what we’ve done in the past, and it has absolutely no bearing on how we perform in the future,” Balkin said. “We know we have to come out and play every match, so we don’t even think about keeping the streak alive.”

Balkin said as meaningless as the streak may be to the team for motivation or in helping to produce results, it is still an impressive reminder of just how well this team has performed over the last 9 seasons.

The women’s team has one more event left before the winter break. They are preparing to compete in the WIAC tournament on Oct. 24 in Madison, Wisconsin.

The men’s tennis team saw its last competition for the remainder of the semester this week at the national tournament in Sumter, South Carolina.

The team of seniors Jake Humphreys and Michael Treis represented the Warhawks well, defeating Kyle Richter and Adrian Sirovica of California-Santa Cruz in two sets by a score of 6-4, 7-6 to earn seventh place.

It was a slow start for the Warhawks, who were unable to find a way to win on the first day of the tournament. The duo lost their first two matches without winning a set, and had to refocus going into day two with hopes of getting back to their winning ways.

“It’s definitely kind of a mental thing, you know (head coach) Frank (Barnes) talked to us a lot about it after the first day,” Humphreys said. “I think he hit it spot on. It’s hard to be confident because you have to work so hard to win points. I think we were just over thinking basically, and I think the first day was a little rough for us.”

Barnes said being in this situation before, and pointed to his experience, as well as that of his veteran players, as the keys to getting back to playing their brand of tennis on day two.

“We were trying to do too much,” Humphreys said. “After the first day we realized that we’re not going to be able to do that…just play the game and do what we do best and that’s just playing high percentage doubles.”

Barnes was excited to see them turn it around, and highlighted the fact that just being among some of the best competition in the country is an honor.

“You never really want to go 0-4 on the first day,” Barnes said. “The way we responded, I was really happy about that. I think it was a really good experience for the people that were there for the first time.”

Treis, was very excited about his opportunity to compete at such a high level. Humphreys had high praise for his teammate.

“He was focused. It is overwhelming at first to go down there and just be ready to compete with all these really good players,” Humphreys said. “I think Mike did a phenomenal job.”

Barnes also recognized that Treis did a great job of staying focused, adding that it was clear the senior was not willing to leave the tournament without a win.

The small college tournament means the men are finished with outside competition until January, but the healthy competition between teammates never stops. According to assistant coach Byron Balkin, the team will keep busy with captains’ practices, individual tournaments and training on their own.

“I’m really excited about the guys; I think we have a lot of good pieces,” Balkin said. “They still have long ways to go if they want to meet their goals…these two months are really important for them.”