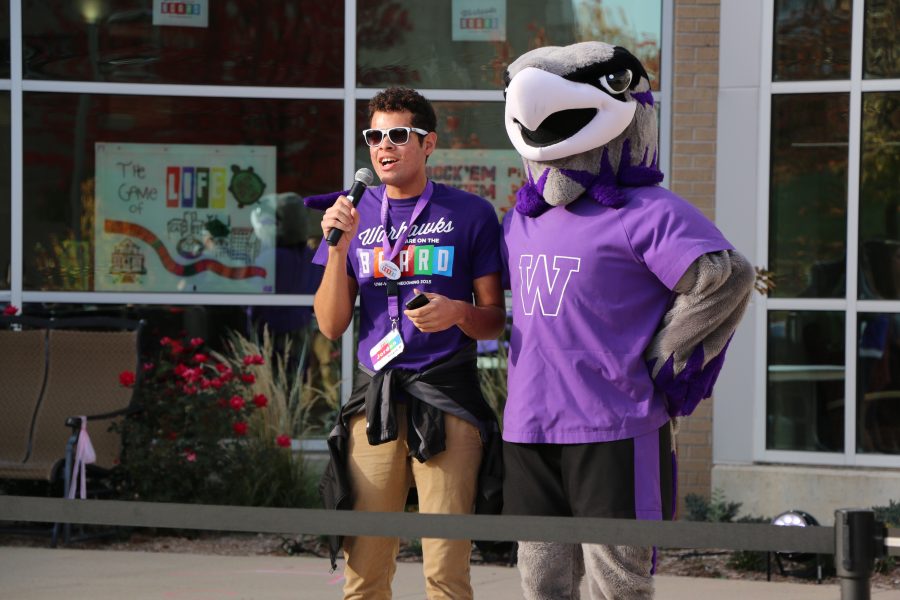 Triple B coordinator Jordan Moncivaiz reads off trivia questions to prepare for the competition. Photo by Amber Levenhagen

Nearly two months after classes went into session for the school year, UW-Whitewater students and the community members are being welcomed home with a celebration that is less than familiar than what returning Warhawks are used to, with the goal of creating a stronger sense of inclusion.

The 2015 Homecoming Court and Senior Awards will no longer include gender binaries. Instead of crowing one king and one queen, the court will consist of the top 10 Warhawks participating and one winner, chosen by an open poll on connectUww, will be crowned as the royalty. Senior Awards will now be given to the top two Warhawks regardless of gender identification.

“Why does it matter what gender you are?” Homecoming Committee Chair Shawn Giese said “If you are the perfect representation, you should be able to win court no matter what you identify as, and same with Senior Awards. We saw a lot of campuses moving away from gender binaries too, so we’re following suit with that.”

Giese believes there may be a fair amount of criticism to go along with the change in the first year, but will overall improve on campus inclusion, especially as time goes on.

The Homecoming events schedule also saw major change. The “Yell Like Hell” spirit rally took place on Monday afternoon outside of the University Center, instead of Friday night in the William’s Center as it has in past years. The Variety Show was moved to Friday night instead of Monday, but will still be in the Young Auditorium, as it has been traditionally.

The change came from a scheduling conflict with the Young Auditorium where only Friday night was available. However, the thought of moving the spirit rally existed prior to the conflict.

Giese and the Homecoming Steering Committee hoped that moving the spirit rally outside would help include more Warhawks and bring in a larger crowd, beyond just the competing organizations.

While Homecoming events will dominate the week’s activities, the weekend will be jam-packed with different kinds of celebration. Saturday, which includes the Homecoming Parade and football game against UW- Eau Claire, is also Halloween.

The decision to make Homecoming weekend the same as Halloween was made by the athletic department in coordination with planning other home football events.

“We made the dance, which is on Thursday, theme costume party so we’re hoping a lot of students will come in costume and celebrate their themes, Halloween and Homecoming all at once,” Geise said. “But we didn’t have a say in the weekend that it lined up on so we didn’t really let it affect our planning too much.”

This year’s theme is “Warhawks are on the Board.” Forty-two different organizations are all dedicated to one board game each that will be their theme throughout the week in events like the window painting competition and their parade floats.

“I think Homecoming is super fun no matter what org you’re in. I’ve done it for other orgs, I did it for my dorm freshman year,” president of Delta Zeta sorority, Elyse Kohn said. “It’s a fun way to get a ton of different students involved and lots of different orgs. There’s a lot of unity through the whole school and school spirit.”

Although the Homecoming competitions are between student organizations, events are not only for students in those orgs, according to Giese.  All students are encouraged to participate in and attend Homecoming events.

“Everyone should participate,” Student Optimist Club vice-president Jenna Leibfried said. “I don’t think it is just Greek life. Greek organizations are the bigger organizations but there are different divisions. Everybody is part of this campus and Homecoming is for anyone.”

While the Homecoming committee strives to involve more students in Homecoming, individual organizations also run into some issues while planning and preparing for the week. Kohn believes that one of the most difficult parts of Homecoming can be finding enough people to participate, especially for smaller organizations. Leibfried said trying to balance the amount of time it takes to plan and participate with school work can be challenging.

“It takes a lot of time and planning to get it all together, but once it comes together, it is a lot of fun,” Leibfried said.

Despite a number of changes made to the schedule and structure of Homecoming, the week will still be powered by the tradition of school spirit and the hope the students, faculty, alumni and community members will always strut their Warhawk pride.

“[Homecoming] really shows the pride we have as Warhawks,” Geise said. “I think it shows how proud or orgs and club are to be at Whitewater and having a lot of alumni come back and knowing the community loves our football team. It is a celebration of all that at once.”