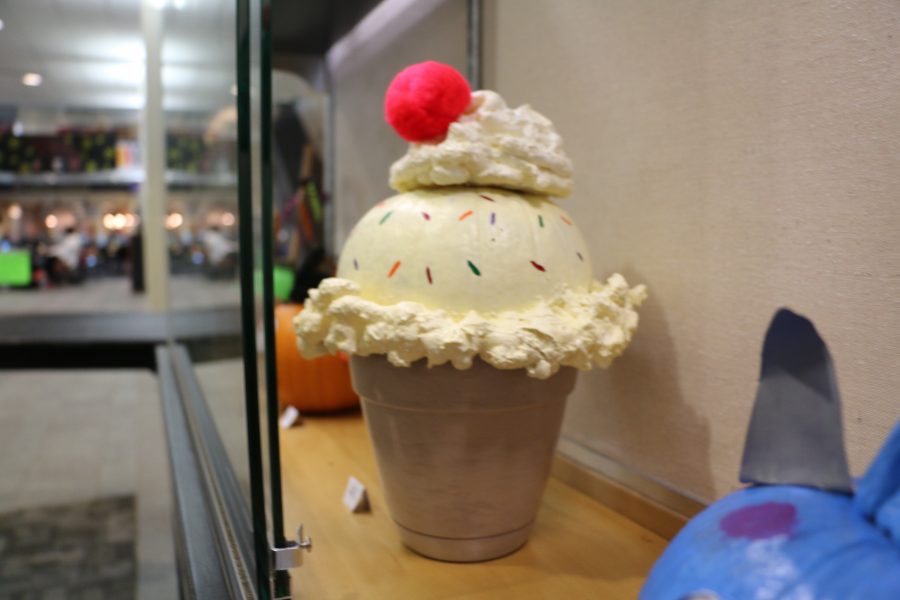 October is the month dedicated to fall colors, Halloween, trick-or-treating and, of course, pumpkins.

For several weeks, the University Center has displayed an arrangement of decorated pumpkins. The pumpkins were decorated as everything from ice cream cones to a “Legend of Zelda” theme.

Students were asked to vote for their favorite with a ballot system.

University Center Assistant Director Kim Adams said the event was to help get students in a festive mood.

“We didn’t really have any specific rules,” Adams said. “We allowed students to access supplies from Roberta’s Art Gallery. So [we had] paint and we had different colors of kernels of corn, buttons, beads, bobbles, pipe cleaners, anything that they wanted to access from the art gallery they were allowed to use, or they could grab things from their homes and add to the pumpkins.”

“We allowed students to take them home and decorate if they wanted to,” Adams said.“Otherwise we set up space in Roberta’s Art Gallery for them to come and decorate there so everybody had kind of equal access to supplies.”

Student Natalia Hernandez was involved with the Pumpkin Decorating Contest as well.

“When everyone was decorating the pumpkins, it was fun to watch them because at first no one knew what they were doing and they were kind of just messing around with things,” Hernandez said. “After, when they were actually making them it was fun, because we got to see people bond a lot, we bonded a lot so it was nice.”

Forty-eight pumpkins were decorated for the event, but students were asked to choose just one as their favorite.

“My favorite one – I have to think,” Hernandez said. “Cyndee [Santieri] from the Hawk Card office. She made one for the queen of hearts – and I thought that was really a cute one because you know she had the whole hair going on, and it was very, very creative, and she had the make-up, and it was nice to see a pumpkin transform, so that was my favorite one.”

The first-place winner received candy, a movie pass the Summers Auditorium and a gift certificate to Willie’s 360. Second place received a T-shirt and third place earned a movie pass with candy.