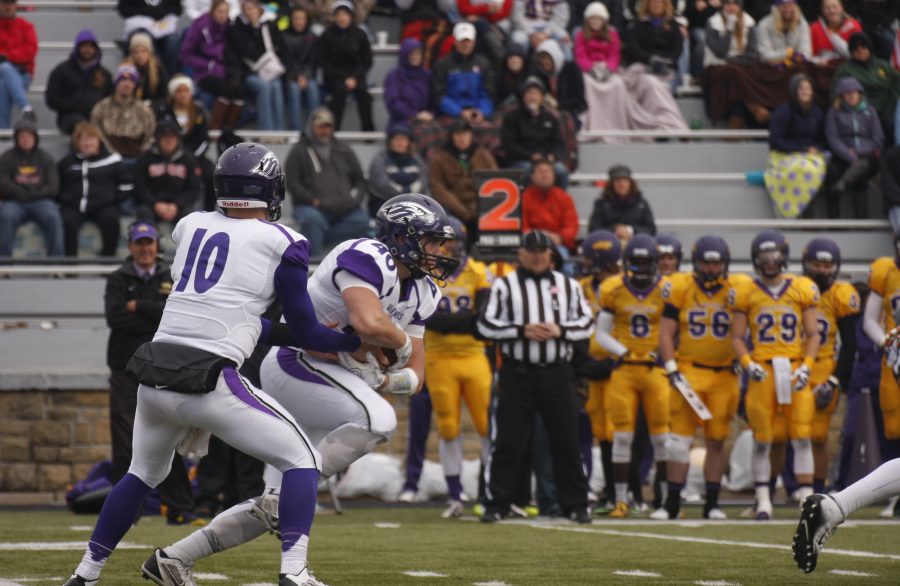 Despite a relatively close matchup, the Warhawk football team propelled itself to a 35-27 victory against UW-Stevens Point to hand the Pointers their third-straight loss on Oct. 24.

“Going in, we knew it was going to be a tough game,” senior running back Jordan Ratliffe said. “Going up against Stevens Point is always tough, but we stuck to our training and did what we had to do to get the win.”

The ’Hawks accumulated 400 total yards on offense, including 268 through the air, but the Pointers picked up 428 overall and 366 passing yards.

“We started out extremely well, both offensively and defensively,” senior defensive back Ryan Winske said. “Things definitely slowed down in the second half. Being on the defensive side, I definitely think we gave up too many points than what we should’ve.”

Where the Pointers fell short, however, was on the ground.

The ’Hawks’ defense entered the matchup ranked No. 7 in Division III, allowing just 71.2 rushing yards per contest, and Saturday’s game was no different.

The Warhawk defense held the Pointers to 62 yards rushing, while posting 12 tackles for a loss, three sacks, two forced fumbles and four interceptions.

“I was happy that we had four interceptions total,” Winske said. “I think our defense was kind of struggling a little bit with getting turnovers in previous games, so that was a little motivating that we’re finally getting back on track.”

Senior linebacker and First-Team Preseason All-American Justin Dischler picked off UWSP quarterback Kyle Larson early in the first quarter to set the ’Hawks up for their second touchdown of the game.

Senior defensive back Dylan Morang recorded his second interception of the season, and Winske grabbed two passes from UWSP second-string quarterback Cody Nuernberg in the fourth quarter – one of which sealed the game for the ’Hawks by halting the Pointers’ potential comeback with 37 seconds remaining in the contest.

The Pointers trailed for the duration of the game, but came within one score of the ’Hawks by tacking on 13 unanswered points in the first 21 minutes of the second half. After a recovered onside kick, the Pointers, down by eight, began marching down the field with 1:01 left to play, only to turn over the ball to end the game.

“I kinda knew that we’d stop them,” Winske said. “It was just frustrating that we were in the position that we were.”

Offensively, the Warhawks racked up 132 rushing yards. Ratliffe led the ’Hawks’ backfield with 86 yards and four touchdowns, tying a school record for most scores in a game. He split carries with freshmen Tyler Glass and Jarrod Ware and senior Nick Patterson, who made his first appearance in a month due to injuries.

After throwing a career-high 246 yards two weeks ago against UW-La Crosse, junior quarterback Chris Nelson surpassed that mark this past weekend, compiling his second-straight career day with 268 yards and one touchdown in 15-of-22 passes.

Up next, the Warhawks will host UW-Eau Claire on Oct. 31 for Homecoming. Kickoff is scheduled for 1 p.m. at Perkins Stadium.