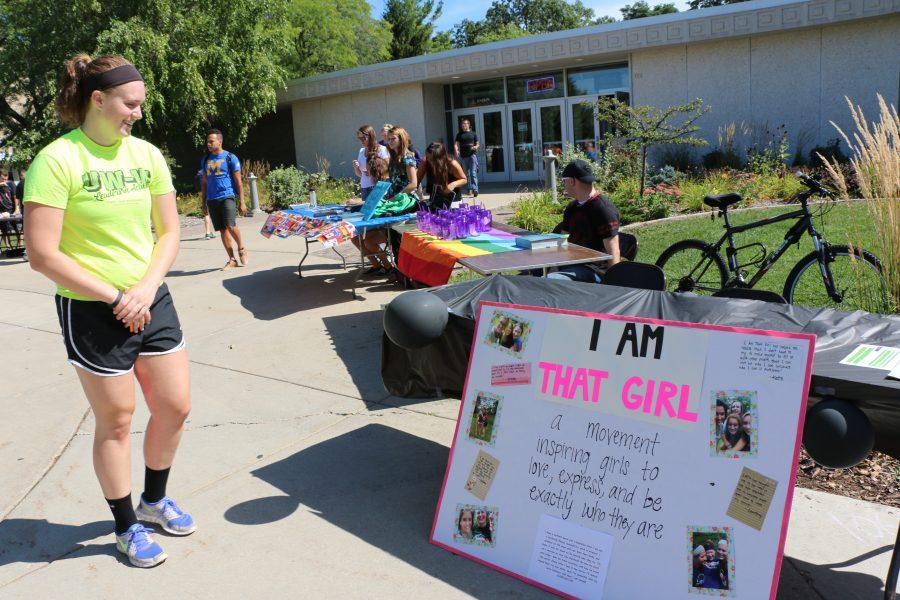 Junior biology major Kaitlyn Mckay discovers the I Am That Girl table at the Involvement Fair held Sept. 9 on the Wyman Mall. I Am That Girl had 104 women show interest in their chapter at their first appearance at the fair. Photo by Amber Levenhagen

Hundreds of students join organizations and clubs to get involved on campus and in the community every semester, but few can say they took charge in starting something new.

Seniors Alex Wente and Hannah Lee are two of those few.

Roommates and gymnastics teammates, Wente and Lee started the University of Wisconsin-Whitewater’s local chapter of I Am That Girl (IATG), an international community that spans across eight countries and has over 1,600 local chapter members empowering women to spread love to themselves and others, according to I Am That Girl’s 2013 annual report.

“Myself and Hannah looked at the website and basically fell in love with the message it is teaching us about ourselves and how to spread that to other girls, so we were more than happy to start it here and see where it would go,” Wente said.

I Am That Girl describes their vision as “shifting girl culture.” The international community aims to “transform self-doubt into self-love” through open conversation and safe outlets for self-expression, according to iamthatgirl.com.

Allison Annala, assistant gymnastics coach, approached Wente and Lee about starting a chapter of IATG on campus in spring 2015. Annala already was involved with IATG as a blogger and intern and now is also the advisor for the UW-W chapter.

The chapter’s co-founders worked with the university, as well as leaders from IATG headquarters, to get it started on campus at the end of the Spring 2015 semester. There were approximately 10 members coming to the meetings when it originated, according to Lee. The chapter took off after this semester’s Involvement Fair, where 104 girls signed up to learn more about the chapter.

The meetings act as a gathering for women to engage in conversations about how women can empower each other. Wente and Lee say they lead by example by feeling confident in themselves and their emotions, and they aim to spread that to new members and women everywhere.

Meeting attendance has more than doubled this semester with approximately 20 women attending on average. The co-founders also started an online community on Facebook where women can openly discuss issues or successes in their life and share inspirational messages. The Facebook group has 40 women currently involved.

Starting the chapter not only allowed Wente and Lee to reach women on campus, it also gave them opportunities to meet women all over the world, including a woman who recently started her own chapter in Egypt.

Lee is an editorial intern for IATG, and was able to travel to Malibu, California for a retreat with 27 chapter leaders and interns to learn more about IATG and herself.

“It was the coolest thing because I don’t know if there is anything scarier for a girl than to walk into a room with 27 other girls, and that’s the way society has been built with this jealousy and competition,” Lee said. “I learned that walking into a group of 27 other girls can be the most amazing, game-changing experience in your life.”

Wente had the opportunity to sit in with Annala on a Skype call with a group of middle school girls to spread the message of IATG.

“That honestly brought tears to my eyes a little bit to see little girls in middle school sit around a circle and explain why they are that girl and what they love about themselves and others,” Wente said. “It’s so cool because the influence to start loving yourself so young was an amazing experience and I wish when I was younger I could have had something like that.”

IATG meetings act as a safe place, where women are not competing, but empowering each other. Wente said that IATG helped her open up and be more vulnerable with her feelings, which then helped her lead by example and teach other women how to be more open; Lee believes that IATG helped her find happiness in being herself.

“The reason that I Am That Girl as a movement has been so successful is because there is a dire need for it,” Lee said. “For girls to just be able to be themselves in a society who tells them who not to be.”

IATG reaches out to girls through local chapters, but also through their website. Both men and women can take the pledge to be “that girl” or “that guy” and get on board with their mission. For more information, visit iamthatgirl.com.

UW-W’s chapter of I Am That Girl meets Sundays at 1:55 p.m. with the location being announced on the group’s Facebook page. For more information on the local chapter, visit connectUww.