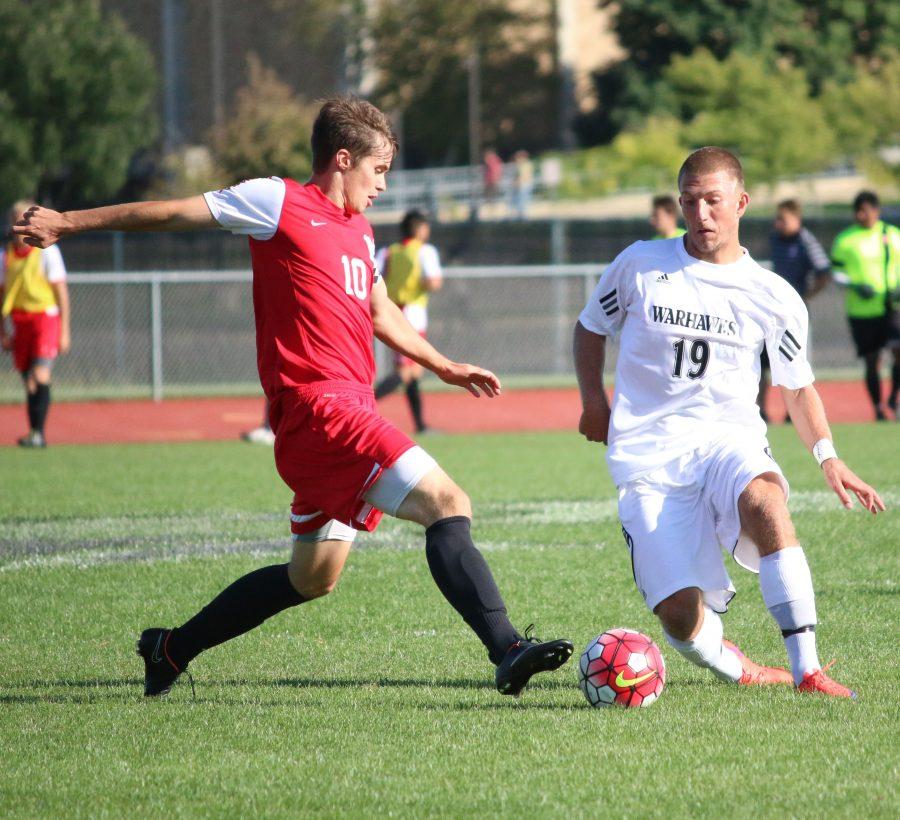 The UW-Whitewater men’s soccer team ended its regular season with a 3-2 loss against UW-Platteville in overtime on Oct. 28. The team now awaits the announcement of the 61-team field NCAA Tournament on Nov. 9 at 12:30 p.m. on NCAA.com.

“Platteville played well which didn’t help,” senior Jordan Wilkins said. “We came out flat and we didn’t play as hard as we should have right out of the gate.”

Senior Kyle Ricely attempted to score first for the ’Hawks in the fourth minute, but the shot was blocked by the Pioneers’ goalie.

The Pioneers retaliated with five unanswered shots, scoring in the 23rd minute to take a 1-0 lead.

Freshman Alex Whiteman came back two minutes later to tie the game 1-1, off an unassisted goal.

Platteville’s foul in the 31st minute resulted in a free kick for UW-W. Junior Justin Stanko took the kick for the team, but it was blocked by the Pioneers’ goalie, ending the half tied 1-1.

“Platteville’s a very good team, and they scored first,” head coach Tony Guinn said. “We were always following them, like catching the game.”

The Pioneers took the lead in the 56th minute, but 30 seconds later, freshman Callan Lucjak scored off a pass from freshman Jack Wirth to tie the game 2-2.

Both teams fought until the 90th minute, but with no shots scored, the teams headed into overtime tied at 2-2.

Stanko fired UW-W’s first and only shot in overtime in the 93rd minute, but the shot was too high to find the net. Five minutes later, Platteville scored to take the win 3-2 and end UW-W’s regular season with an overall record of 14-3-1.

“It’s one of the best seasons, if not the best season we’ve had since I’ve been here,” Wilkins said. “The guys have gotten along really well this year which is really important, and that has been a big factor as far as why we’ve won as many games as we have.”

“It was a great season,” Guinn said. “The fact that we graduated nine seniors last year, of which a majority of them started, I would think a lot of people didn’t think that Whitewater soccer was going to be as good as it was this year.”

The ’Hawks lost in the second round of the tournament last year to Wheaton College (Illinois) 3-0.

Last year was also the team’s first tournament appearance under Guinn and its first since 2011.