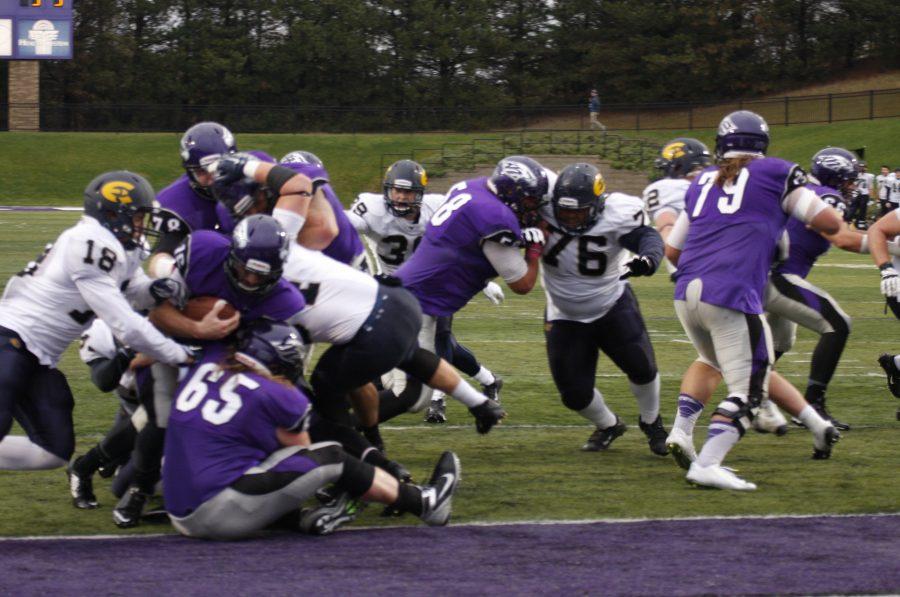 The Warhawk football team, ranked No. 6 in the latest D3Football.com poll, utilized a high-powered offense and lockdown defense en route to its triumph over UW-River Falls, 42-6, on Nov. 7.

Despite an average margin of victory of 41-14 against the Falcons, the ’Hawks needed a last-minute touchdown when they traveled to River Falls last season to win 28-25 and seal its 34th WIAC title in program history.

“One of the things we pride ourselves on is respect your opponent,” head football coach Kevin Bullis said. “[Our captains] feel like they have kind of a sense of redemption going back up to River Falls.”

After sneaking away with a win last season, the 8-1 ’Hawks racked up 524 yards of total offense in this year’s blowout, scoring on each red zone appearance.

Continuing to build upon their passing game, the ’Hawks accumulated 340 yards through the air. Junior quarterback Chris Nelson completed 18-of-23 passes for 269 yards and two touchdowns, while junior wide receiver Marcus Hudson grabbed nine passes for 159 yards and a score to surpass his career-high in receiving yards for the third-consecutive week.

“Defenses are starting to man up a lot on us and force us to pass, so we just started unleashing our quarterback and having success with it,” Hudson said. “The offensive line has been blocking pretty well for Chris [Nelson], giving him time to throw it, and I’ve just been getting open a lot and making plays once the ball is in the air.”

On the ground, the ’Hawks  garnered 184 yards, compared to the Falcons’ 103, but averaged 6.1 yards per rush while the Falcons could only manage 2.7. Senior running back Jordan Ratliffe led the backfield with 79 yards and two touchdowns. He leads the WIAC in touchdowns (15) and rushing yards (883).

The ’Hawks struck first against the Falcons after freshman Canton Larson ran 54 yards on the opening kickoff to ultimately set up Ratliffe’s first touchdown of the game – all in less than four minutes into the contest.

After trailing 14-0 at the end of the first quarter, the Falcons ate up 6:51 off the clock to pick up their only points of the day – a touchdown by junior Rance Ashley – only to have the extra point blocked.

The ’Hawks would go on to score 28 unanswered points to close out the game, including an option play in which sophomore tight end Tony Gumina threw his first-career touchdown pass for 43 yards to Hudson in the fourth quarter.

Defensively, the ’Hawks, ranked No. 11 in the nation in rushing defense, sacked first-time starter Ben Beckman four times and held the Falcons to 6-of-16 on third down conversions and 1-of-4 on fourth down.

“The defense sets the tone for us [on offense],” Hudson said. “They give us a lot of momentum because they’re always making plays, always finding a way to get us good field position.”

Senior linebacker Justin Dischler led the team with 11 tackles and a forced fumble, while junior linebacker Kyle Schiedemeyer added nine, including 2.5 for a loss. Defensive lineman Zach Franz and Yuri Pogosyan and senior defensive back Dylan Morang each recorded a sack.

The ’Hawks will close out their regular season schedule at 1 p.m. on Saturday, Nov. 14 against UW-Stout at Perkins Stadium.

Although the Blue Devils are 3-6 and give up an average of 566.7 yards per game, Hudson said the ’Hawks aren’t going to take them lightly.

“We’re going to respect them coming into our place,” Hudson said. “We know what we have to do; we have to finish [the season] off strong and just play as a whole team. We don’t really worry about [their record], we just play our game.”