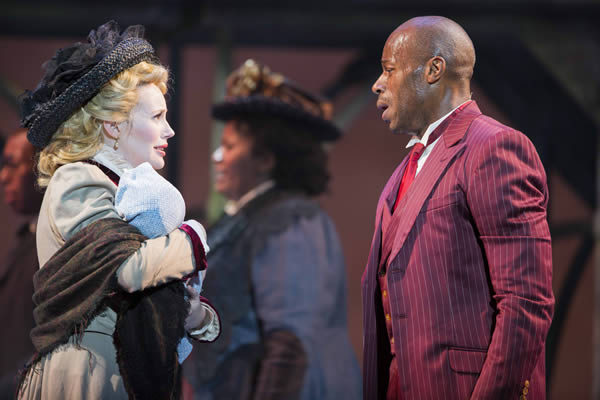 The issues regarding race and social stature in regard to the American Dream are classic and ongoing.

In the hit Broadway musical, “Ragtime,” those issues take center stage as they are displayed among the various characters that make up the diverse ensemble.

“If you think about the story it might not be relatable because of the era, but there are the same struggles that people have, the same ventures into the unknown or fighting against uphill battles,” Stacy Sherman, associate marketing specialist of Young Auditorium said. “These are themes that are very strong in the arts because everyone has had a struggle.”

“Ragtime” is a musical set at the turn of the 20th century in New York. The story follows three different families as they chase their dreams and struggle with obstacles that stand in their way. The plot showcases the issues of the day such as sexism, racism and xenophobia which are brought to life in the Tony Award-winning score.

“What I find with a lot of these musicals that have been around forever, there’s some very recognizable music which over time becomes culturally significant,” Sherman said.

The musical was inspired by the 1975 novel by E.L. Doctorow. Both the musical and novel play with the mixture of historical and fictional characters to tell the story. Historical figures such as Harry Houdini, Evelyn Nesbit, Booker T. Washington and Henry Ford, among others, are given important moments in the plot. The blend of fact and fiction allows the story to explore it’s fictional moments with the backbone of history to help ground the plot in reality.

The event also offers an optional themed dinner to preclude the show. The meal is developed by the chefs at UW-W Dining Services Catering. The buffet includes coffee and water. A cash bar is also offered.

“We like it because if you go to a big city and you go out you’ve got to go somewhere to eat, and then you have to park,” Sherman said. “If you have a dining option you can park here and hang your coat up. You don’t have to leave the building before your evening is over.”

“Ragtime” is also an opportunity for students to see a large Broadway-style production right on campus.

“They’re a massive undertaking,” Hans Pregler, the technical director of Young Auditorium, said. “The entire set-up and tear-down happen in that day. With “Ragtime,” we have about 60 people to help with the building and tear down of the show.”

“Ragtime” is a large show that needs a wide variety of sets, props, and other materials to tell its story.

“Stage workers are really the unsung heroes,” Pregler said. “We don’t really want people to realize what goes into it because it would defeat the magic of it.”

“What you get out of it doesn’t even matter what show it is all the time, it’s about the experience of seeing art done live. It’s more heartfelt in a lot of ways because the feelings are coming right from the performers,” Sherman said.

The “Ragtime” experience is set to impress whether you’re a theater nut or are simply curious as to what a Broadway show is like.

“Ragtime” will show on Feb. 9 at 7 p.m. The optional themed dinner will occur 90 minutes before showtime. Tickets can be purchased in person at the box office located in the Center for the Arts or online.

Visit ragtimeontour.com for more information on the tour.