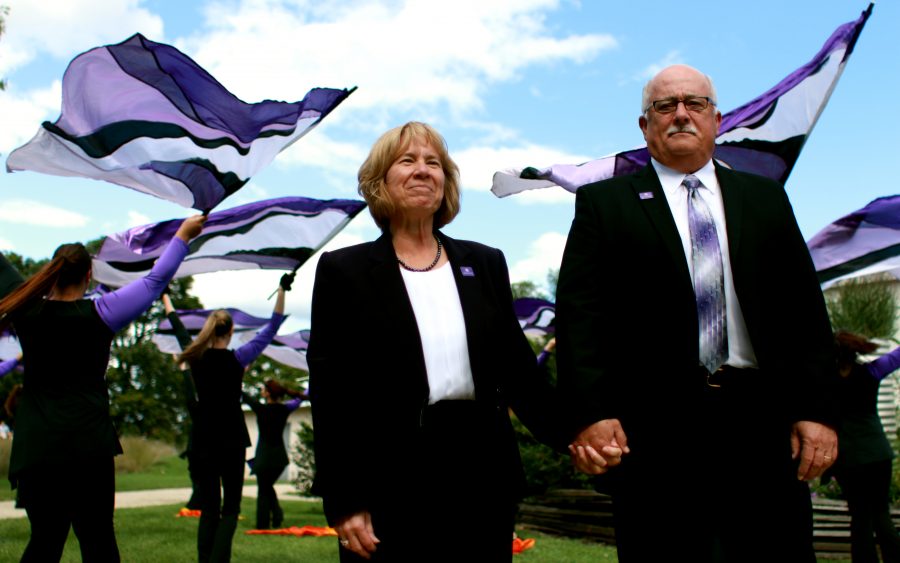 Collectively, the Royal Purple’s staff of 17 editors and many more staff writers wrote about the good, the bad and the political news, penned editorials on the world around us, featured the People of Whitewater you see on your way to class and was there through the successes and struggles of UW-Whitewater’s varsity teams for 27 weeks of your academic year.

Campus climate became a dominating issue mid-February following a “Pizza with the Chancellor” event on Feb. 16, where around 80 students from the Black Student Union showed up to make their experiences with racial bias on campus known to Chancellor Beverly Kopper.  Later that night, a photo depicting two students wearing dark facial masks – complete with the UW-W geotag – sparked a conversation first on Facebook, then across campus about how those of all races and diverse backgrounds were being treated by their fellow students and faculty.

It made national headlines, as Kopper’s news release spread from local media all the way to the Huffington Post.

A week later, the newly formed Campus Climate Working Group held an Action Forum in the UC Hamilton Room to create an open dialogue about student and faculty experience, and to the Working Group’s – and the UC employees, who spent 15 minutes bringing out additional chairs – around 400 people showed up.

From there, the Working Group identified four areas where they could fix the campus climate and held forums to introduce those solutions five weeks later through smaller, more topic-concentrated forums in the week leading up to Spring Break.

However, it wasn’t before Snapchat got the best of campus climate again, this time featuring freshman Shawn Raymond, who has cerebral palsy, struggling to push his borrowed wheelchair forward in freshly fallen snow.

The incident prompted him to join the Working Group.

UW-W isn’t the only campus dealing with campus climate. It’s become such a prominent issue across all UW campuses that the UW System Board of Regents created its own task force last month to figure out how to combat negative experiences of bias and discrimination on campuses across the state.

On the fourth floor, emeritus Chancellor Richard Telfer’s office was emptied as his tenure with UW-W ended on June 30, 2015. It didn’t stay empty for long – then-Provost and Vice Chancellor for Academic Affairs Beverly Kopper was approved by the UW System Board of Regents a little more than a month before Telfer’s retirement.

After months of searching and screening candidates to take over Telfer’s post, Kopper was named the 16th chancellor of UW-W – a title made official at her inauguration ceremony on Sept. 11, 2015.

“I vow to honor the trust you have placed in me,” Kopper said during her Sept. 11 inaugural address. “[I intend to] continue this university’s drive to succeed at the highest level.”

This wasn’t her first time serving in the role of chancellor for UW-W; she’d stepped into the role of interim chancellor two years prior, when Telfer took a leave of absence to serve as the interim UW System President when Kevin P. Reilly stepped down from the position.

In turn, that left Kopper’s provost office open, which was then filled by John Stone, dean of the Graduate Studies college.

It was a temporary interim position, which Stone held for the majority of the academic school year, until the Search and Screen committee narrowed down their pool of 50 candidates to four, and then to one: Susan Elrod.

A Ph.D in genetics, Elrod said during a February interview with the Royal Purple she was excited to focus on enhancing High Impact Practices – which entails undergraduate research and learning communities, to name a few – close achievement gaps within the university, and adjusting to the Wisconsin weather.

“I think, overall, for me, I’m hoping that I can come to the university and help the university take its very solid foundation and the great work that already happens between students and faculty … to the next level so that Whitewater can become an even more prominent national leader,” Elrod said in a Feb. 24 issue of the Royal Purple.

These changes were planned and prepared for – the sudden vacancy on Hyer’s second floor in the Dean of Students office, however, was not.

Kopper sent out an email on the first Saturday of November 2015, announcing UW-W had lost the “passionate and dedicated Warhawk” MaryBeth Mackin, who served as the Dean of Students.

Her Nov. 7 death prompted the university to find a replacement for her and hold a memorial within the span of a few days.

Associate Director of University Housing Terry Tumbarello was called on to juggle Mackin’s post without taking a leave from his current role for the remainder of the fall semester and for all of the spring semester. Upon learning about the appointment, he called it “bittersweet.”

“It’s been a very nice accolade, and it’s always nice when your work has been recognized and the campus has put that kind of faith in you, but this is absolutely not how I wanted this to happen,” Tumbarello said in the Nov. 18, 2015 issue of the Royal Purple.

Mackin’s tenure at UW-W neared 30 years; she had started as a residence hall director in 1988, promoted from one role to another up until the Dean of Students.

A permanent successor for Mackin has yet to be determined, but the university is a few steps closer; they announced the final four candidates for the Dean of Students position last week.

3. Scramble for a grocer

Over the past two years, Sentry manager Ken Riley worked to sell the 50,000-foot facility to 14 prospective buyers, but in the end, no one took a bid.

It left Whitewater residents two options: shop at the Wal-Mart next door, or journeyto neighboring towns where a grocery store is available. Fairhaven residents, who received shuttle rides to the Sentry, and those unable to travel had their options further limited.

By February, the thought of a co-op was in the minds of Whitewater’s Commercial Development Authority (CDA) and local business owners as a solution to the lack of a grocery store, as they presented their ideas to the Whitewater Common Council.

As of last month, more research into bringing a co-op to Whitewater had been completed, and local businesses had taken steps to help the community cope in the meantime.

Since the February Common Council meeting, The SweetSpot Cafe owner Lacey Reichwald created the position of Community Outreach Coordinator on her staff in order to answer questions from the community, and Black Sheep restaurant owner Tyler Salisbery said he’d start selling dairy, meat, organic produce and grain products for sale at his stores.

“I know I may lose money from selling some grocery items, but I care to see the community have what it needs,” Salisbery said in an April 5 issue of the Royal Purple.

As of the last public meeting where the future of the co-op was discussed by community members, Reichwald was looking to create a board of directors of 12 to 20 members for a future co-op, which would be responsible for pulling in quality vendors.

It was mentioned that with the right processes, a co-op could be up and running within two to five years.

Despite the enthusiasm seen in the community over the possibility of a co-op, student government leaders don’t quite feel the same. At last week’s Whitewater Student Government meeting, they proposed and unanimously approved a resolution stating they as a group didn’t support the development of a co-op, because of how its group of supporters planned on distributing a survey on it – right after much of UW-W’s population leaves town for the summer, instead of waiting until fall.

A common concern discussed at WSG was that students wouldn’t be able to afford the prices offered at a co-op.

“They already have a survey done,” Frigo said. “What are they going to be doing all summer with that survey when students aren’t here?”

4. The path to the presidency…

By the time the polls closed at 8 p.m. on Election Day, more than 1,500 on-campus residents had voted in the Hamilton Room, with a line of students still waiting to cast their ballot stretching the width of the University Center.

“For a presidential primary, this is the biggest one I’ve seen,” Career and Leadership Development Associate Director Jan Bilgen said in an April 6 issue of the Royal Purple.

With the high turnout and students finding out their photo IDs from out-of-state driver’s licenses were invalid with the state’s recently reinstated voting laws, the HawkCard office was kept plenty busy, printing more than 75 IDs before 2 p.m., with six hours left in the polls.

The campus’ political activism didn’t just start on Wisconsin’s decision day – students found themselves attending campus debates between political organizations and attending the candidate’s rallies in the weeks leading up to the primary.

Donald Trump’s rally in Janesville saw hundreds of protesters from the surrounding communities who showed their disapproval for the businessman’s campaign rhetoric.

Other candidates’ rallies in the days leading up the election received few protesters, if any, in comparison to Trump, but that doesn’t mean protesters only reserved their grievances for Republicans hopefuls during the election season.

At the Democratic Debate between former Secretary of State Hillary Clinton and Sen. Bernie Sanders (I-Vermont) at UW-Milwaukee on February 11, protesters made themselves known by standing near – or in the case of some, storming towards – the press filing room to broadcast their message loud and clear.

UW-M senior Oliver Edwards, along with other students Royal Purple reporters spoke with at the Student Union, were upset over the meager number of tickets given out to the student population. Fight for $15 activists marched their way into the Union, putting on a display for reporters barricaded behind the glass doors of the press filing room before moving to the lower level of the building, chanting for a rise in the minimum wage and a union for campus workers.

5. …and a dead end on the road to Virginia

There was no flight out to Virginia this past season for the football team, no 17-hour bus rides for the Whitewater Marching Band, the Spirit Squad or the dance team.

Instead, Mount Union eliminated the Warhawk Football team from the playoffs in the national semi-final game, as they were on the same side of the bracket as each other this year, leaving plenty of fans disappointed.

The Warhawks still ended their season with a 12-2 record and a ranking of No. 4 by D3Football.com.

Their only other loss was to UW-Oshkosh in the regular season by a score of 10-7, breaking the ’Hawks’ record winning streak of 36 games – a winning streak in place since October 2012.

“It was a surprising feeling,” junior quarterback Chris Nelson said in an Oct. 14, 2015, issue of the Royal Purple. “We’re really not used to it.”