Too dangerous for planes, but not for your rights 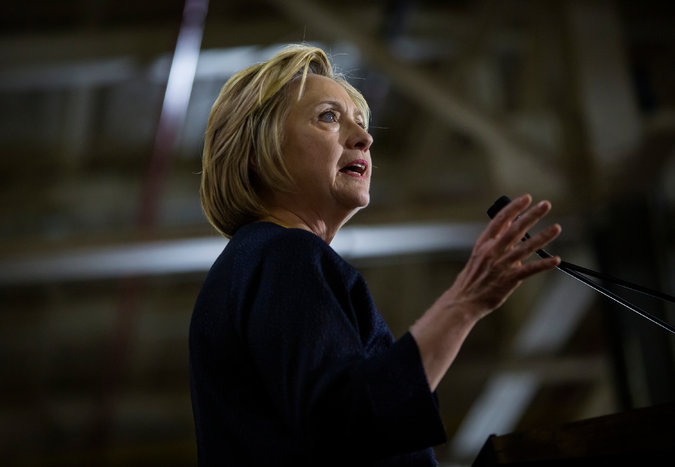 Former Secretary of State and presumptive Democratic nominee Hillary Clinton addressed the Orlando shooting in Cleveland, Ohio on Monday. She called for strategies to limit "lone wolves" with domestic terrorism and banning those on the "no-fly" list from gun purchases. Photo courtesy of Eric Thayer of The New York Times.

The ‘no-fly,’ FBI watch lists needs legislation behind it

“And yes, if you’re too dangerous to get on a plane, you are too dangerous to buy a gun in America:” the words of former Secretary of State and Democratic Party’s presumptive nominee Hillary Clinton, and the resonating message of Sen. Chris Murphy (D-Connecticut) and colleagues on his side of the aisle.

The gun control debate was once again triggered by the events in Orlando over the past weekend, where a lone wolf gunman killed 49 people in a gay nightclub on Latino night before he was killed by law enforcement. President Barack Obama, in his first address to on Orlando the nation on Sunday afternoon, called for more gun control.

His comments, coming at a time where a president’s job is to unite the country, turned the tragedy into a game of political football.

Senate Democrats took to the floor to filibuster on Wednesday to make their wish for gun control reforms known, led by Murphy. Congress Republicans acted in large masses, by offering their thoughts and prayers to victims and their families via Twitter.

It prompted a response from the two presumptive Democratic and Republican nominees to weigh in the issue. Clinton laid out a plan on focus on “lone wolf” domestic shooters in the United States, along with combating ISIS overseas should she reach the Oval Office.

Businessman Donald Trump, however, focused his address – an address talking about domestic, or home-grown, terrorism – on closing the U.S.’s borders to any Muslim immigrants coming from a country with ties to ISIS, completely missing the point of the weekend’s tragedy and making inflammatory statements without a single detail as to how he’d do it, or acknowledging the fact that Congress needs to approve such a move by making it into law.

Trump’s anti-Islam rhetoric bothered me (for reasons obvious), but I was also bothered by Clinton’s words as well.

While I think a “no-fly” mandate for buying guns is a good idea, it’s lacking in one major way: you can’t take away the rights of people, in this case the Second Amendment, on suspicion alone.

Right now, that’s what the “no-fly” list is now: just a list of people, both citizens and foreigners, who have been deemed, for a variety of reasons, that their presence on an American aircraft would be a little hallowing. Many of these people have not been charged with any criminal activity, and therefore should be able to keep all of their rights.

Our Second Amendment, if you’re not an avid follower of the National Rifle Association, provides U.S. citizens the right to a “well regulated militia” for security, but more importantly, protects the right of the people to keep and bear Arms with no infringements.

Granted, this is a document written over 200 years ago during a time in history when our infantile democracy was in the middle of war, so naturally the meaning of the Amendment has had to adapt to current day policies and interpretations.

Should felons, those charged with any degree of domestic violence and mentally unstable individuals not be able to buy guns? Absolutely – because there’s a proven conviction behind it. You can legally prove their ownership of a deadly weapon would be detrimental society.

What we need from Congress is a bill putting procedures into place that would allow those placed on the “no-fly” list to undergo a hearing by a panel of judges, to deem what their status should be when it comes down to owning a gun.

It shouldn’t result in any penal charges, but it would be a way to legally stay within the currently existing law without unfairly revoking a person’s access to their rights.

This shouldn’t just end at the “no-fly” list, either; it should be expanded to include anyone placed on the terror watch list, or investigated for violent acts by the FBI.

Basically, anyone who poses a threat to our national safety, shouldn’t be allowed to buy a gun – but at least deserves to be vetted by judges first.

This is a law is one both sides of the aisle could get behind. For the GOP, this would increase the rate of background checks without revoking access to the right to own firearms. Democrats would find solace in knowing that they’re instituting social change working towards preventing more senseless deaths.

Responsible gun owners should support this, because it would continue to protect their right to keep their firearms.

In any sense, legislation to legally prevent those who are seen as a threat to national security from obtaining firearms is needed to prevent mass shootings from happening. While this is a good start, it of course won’t solve everything – we live in a country of 300 million, there’s always going to be bad eggs – but it’s a start.

We just can’t be a country, founded on freedom and liberty, who will shoot down citizen’s rights at will.