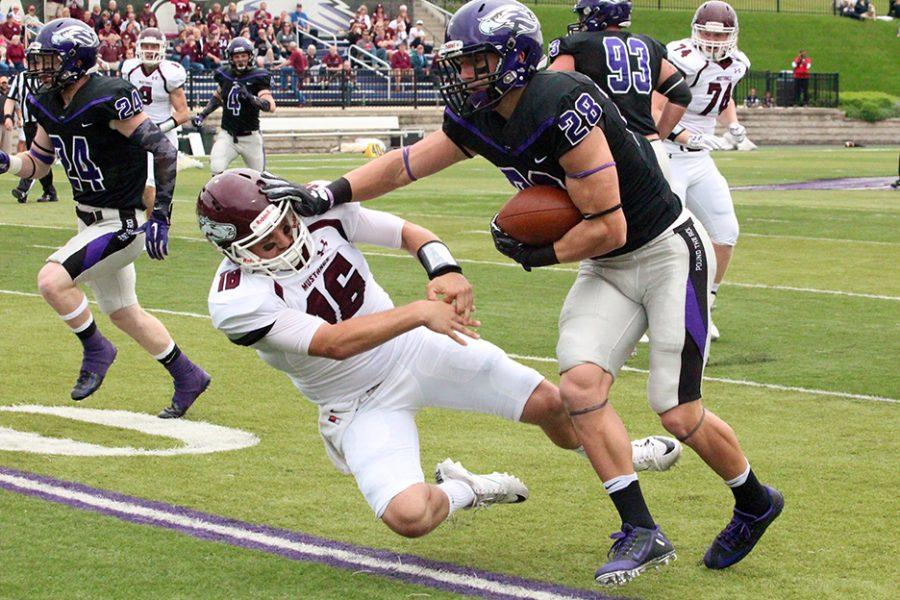 If recent history was any indication, UW-Whitewater fans knew that Morningside College (Iowa), a top NAIA team, was going to prove to be quite a test for the Warhawks.

Fast forward a year later and it was the Warhawks turn to host Morningside. The ’Hawks extended its home win streak to 27 at Perkins Stadium after winning 35-21 on Sept. 24.

Head coach Kevin Bullis wasn’t shy about praising Morningside, the No. 2 team in NAIA division, but said the game will prepare for them for the conference gauntlet ahead.

“They are so explosive as you saw today,” Bullis said. “They can gobble up 70 yards in a heartbeat, and in turn play great defense as well. For us, it was a great opportunity to get ready for conference play. This game for us is about where we are right now, and we are feeling good about it.”

Turnovers were the theme of the day, as the ’Hawks were able to capitalize on many of the Mustangs’ four turnovers.

With the Warhawks nursing a 28-21 lead early in the fourth quarter, the Mustangs drove deep into UW-W territory. Senior defensive back Colin Buck came up with a crucial interception for his third of the season.

Senior quarterback Chris Nelson then hit junior Marcus Hudson for 55 yards two plays later. Two plays after that, the duo connected for an insurance 34 yard touchdown to put the game out of reach.

The ’Hawks switched back and forth between Nelson and sophomore quarterback Cole Wilber.

“They both bring something to the table,” Bullis said. “They bring something different. It’s not like they are an apple and apple. They are an apple and an orange. At the end, we felt that it was a game that really fit Chris’s style. Chris is the field general. He is the field manager, the leader, however you want to label that. Cole is the gunslinger. He has a gun on him where he can throw a ball that is pretty special… First time that we have done that here. We will evaluate that and see if that is a direction we will continue or not.”

Wilber finished the game 5-14 with 82 yards and one interception while Nelson played a majority of the second half, going 9-21 for 234 yards and four touchdowns.

In Hudson’s return to action, he posted four catches for 142 yards and the late score.

“It’s great to be back,” Hudson said. “[I have] been waiting to get healthy with the bye week.”

The ’Hawks opened up scoring with a five yard touchdown run from sophomore running back Drew Patterson after senior defensive back Bennett Young’s first career interception was returned 43 yards.

Young led the team with 11 tackles to go along with his interception.

Patterson then added a 56 yard touchdown off of a screen to give the ’Hawks a 14-0 lead. Sophomore receiver Canton Larson caught a 42 yard touchdown pass late in the second before junior Tony Gumina got on the board in the third quarter.

The two teams combined to miss all five field goal attempts in the game.

Following this tight contest, the ’Hawks will now have to defend No. 8 UW-Platteville’s passing attack in the WIAC opener at 1 p.m. on Oct. 1.

If the ’Hawks come out with the victory, UW-W will put its 27 game win home win streak and undefeated record to the test against No. 5 UW-Oshkosh on Oct. 8.

Hudson said he was glad to face the Mustangs before the ranked conference rivals.

“We are probably going to see that aggressive defense the next two weeks,” Hudson said. “It was good to get that four quarter experience under our belt.”