Hawk Cup comes back to UW-W 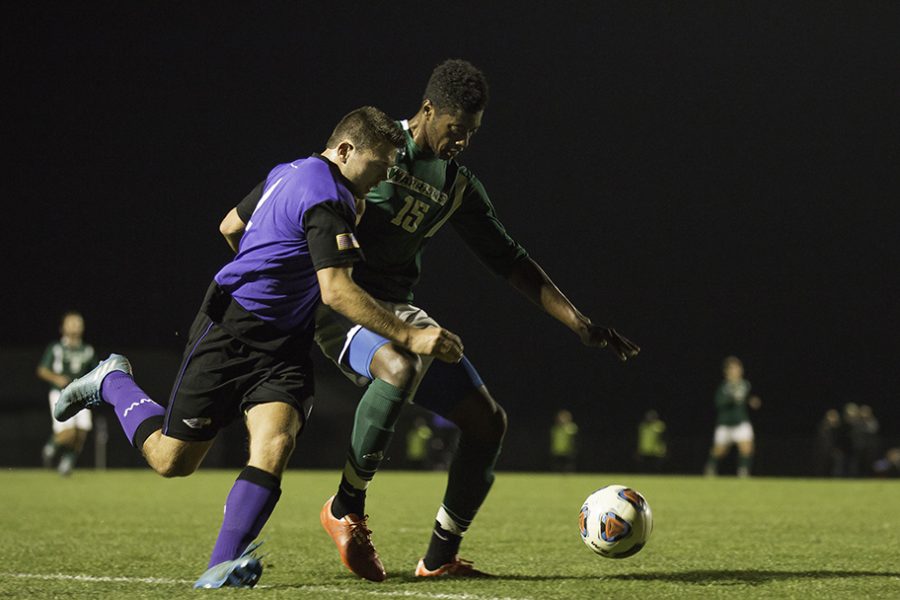 Sophomore defender Alex Bull fights for the ball in the ’Hawks 4-0 victory against Wisconsin Lutheran College on Sept. 30. He recorded an assist in the game. Photo by Kimberly Wethal

The UW-W men’s soccer team topped the Loras Duhawks 2-1 to come away victorious.

This was the eighth edition of the Hawk Cup, which started back in 2009. Loras leads the series 5-3, but UW-W has won the last two.

The Warhawks sped out to a 1-0 lead just three minutes into the game when six-foot-eight, senior defender Justin Stanko bent a free kick around Loras’ wall, sailedn it into the goal.

Junior goalkeeper Chris Lucatorto made several first half saves to keep Loras off the board and carry UW-W to a 1-0 halftime lead.

“He is one of the best goalkeepers I’ve ever coached,” Guinn said. “Every opposing coach comes to me after the game and tells me how good our keeper is.”

Freshman Hozai Ceballos added an insurance goal, which proved to be the game-winner in the 72nd minute after making a quick move to beat the Duhawk keeper.

Loras continued to pressure the Warhawk defense, finally breaking through for a score of their own in the 80th minute.

Unfortunately for the Duhawks, it proved to be futile as the Warhawks held on to win the challenge.

In the first half, an early goal by senior Jordan Kayser gave the ’Hawks a 1-0 lead. The Warhawks were quiet on the scoreboard for the next 55 minutes until sophomore Alex Whiteman put one in the back of the net in the 67th minute.

Sophomore Taylor Ortiz tacked on another goal just five minutes later. Freshman Kevin Mesich scored his first goal of the season as the Warhawks closed out the scoring.

Junior Chris Lucatorto played a majority of the minutes in goal for the Warhawks, making two saves and earning the win.

“I’ve felt prepared throughout every game and trust every player on this team,” Lucatorto said.

The Warhawks then took to the road to face Augustana College for the Viking-Warhawk cup.

This time UW-W was unable to outlast Augustana as the Vikings pulled out a 2-1 victory over UW-W.

The visiting Warhawks took the lead in the 20th minute. Senior Dylan Hottsmith scored his sixth goal of the season with an assist from Whiteman.

The Warhawks kept the pressure for the rest of the match, outshooting the Vikings by a tally of 21-8 and also had the edge in shots on goal, 10-4.

But it wasn’t enough as Augustana senior Michael Brazinski scored twice in the final 32 minutes to lift Augustana over the Warhawks.

“They were a decent team, at home, we just couldn’t score,” Lucatorto said. “Our strength of schedule is a lot harder right off the bat then previous years, but I honestly believe we will be prepared in the later stages against good teams.”

The Warhawks registered four more shots, including one on goal, and one corner kick over the final 10 minutes but were held without              a goal.

The Warhawks will return home for their next contest when St. Olaf comes to Whitewater at 1 p.m. on Oct. 8 at Fiskum Field.