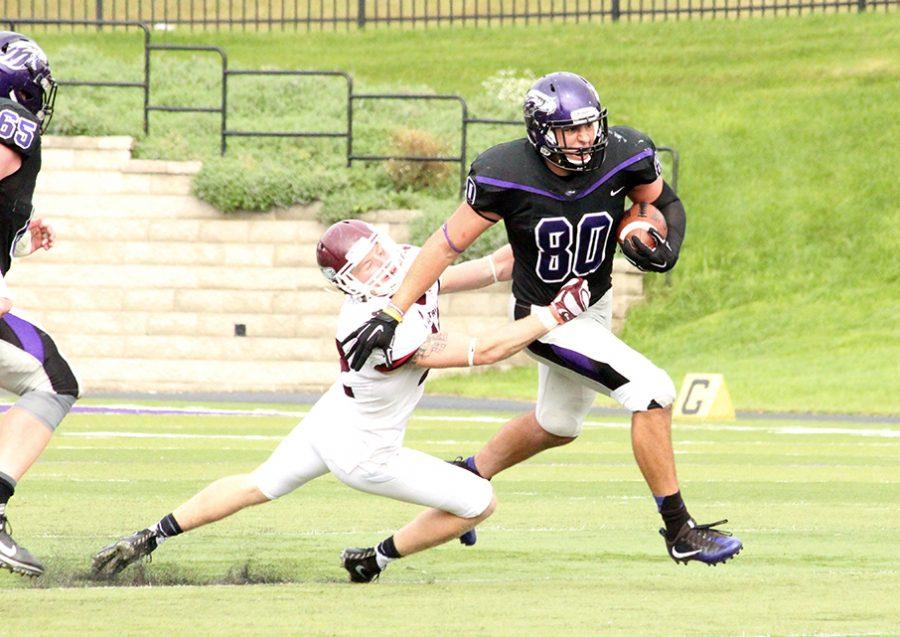 Junior tight end Tony Gumina sheds a tackler in UW- Whitewater’s victory against Morningside College on Sept. 24. Gumina caught a team-high five passes for 39 yards in the 30-24 road victory against No. 5 UW-Platteville on Oct. 1 in the WIAC opener. Photo by Kim Gilliland, graphic by Carlie Sue Herrick

With 10:41 to go in the fourth quarter, the No. 2 UW-Whitewater Warhawks football team found themselves down 24-20 to the No. 8
UW-Platteville Pioneers.

With 3:58 remaining, a pair of sophomores scored the game-winning touchdown to seal the team’s 12th straight victory against UW-Platteville, when Cole Wilber found Canton Larson for a four yard score.

Following Larson’s dive into the end zone and an extra point attempt, the ’Hawks led 27-24 before adding a field goal to make the final score 30-24 on Oct. 1 at Ralph E. Davis Pioneer Stadium in
Platteville, Wisconsin.

Wilber said he had many thoughts running through his head after throwing the game-winner.

“It was just insane,” Wilber said. “All the emotions, we were just all relieved. We were excited, but we knew it wasn’t finished yet.”

The ’Hawks continued the strategy of deploying both Wilber and senior Chris Nelson at the quarterback position throughout the game.

Head coach Kevin Bullis said he likes what both of them had to offer.

“People don’t even notice when you switch D-tackles, or switch linebackers or running backs,” Bullis said. “Quarterbacks, you do that, and people think that there is something strange about that. We look to use one situationally … if one of them starts to take off and in a groove, you want to keep that groove going.”

Nelson started both halves of action and went 6-9 for 62 yards before Wilber was able to get a rhythm going. Wilber completed 14 out of his 23 pass attempts for 246 yards for three touchdowns and
one interception.

Wilber said that he and Nelson are growing comfortable with their roles in the offense.

“Chris and [I] are getting really close now,” Wilber said. “It doesn’t matter who is in, all that matters is getting the ‘W.’ Whoever is in, we accept it, knowing that you had the better game, the better drive, you get in and win it.”

As a whole, the defense gave up 435 passing yards to Pioneer senior quarterback Tom Kelly, but the ’Hawks recorded six sacks and two turnovers.

“When people throw the ball like that, it’s feast or famine,” Bullis said. “You are forcing a team’s hand by having them throw the football, and the potential for turnover is definitely there.”

The UW-W defense also held the Pioneers ground game to negative yardage for the second straight year on the way to claiming the Miner’s Axe for the 12th straight season.

The Miner’s Axe is the rivalry trophy between the two teams that began in 1995, the same year that the yearly match-up became known as the George Chryst Memorial Bowl, after a former UW-Platteville coach died suddenly in 1992.

In the 22nd annual bowl, the Pioneers opened up scoring with a 7-0 lead nine minutes into the game, following a botched snap on a UW-W punt that gave the Pioneers the ball in Warhawk territory.

The ’Hawks then scored the next 17 points, starting on a Will Meyer 48 yard field goal late in the first quarter.

Wilber then connected with Jones for a 68 yard touchdown and Hudson for a 25 yard score in the second quarter.

The Pioneers knotted the score up at 17 halfway through the third quarter.Meyer’s 26 yard field goal gave the ’Hawks a 20-17 lead 12 seconds into the fourth quarter.

Four minutes later, Platteville took the lead back on a touchdown before Wilber led the game-winning drive, and the Warhawks tacked on the late field goal.

After facing the No. 2 team in the NAIA in Morningside College and No. 8 in Division-III football, the ’Hawks host the No. 5 UW-Oshkosh Titans at 1 p.m. on Oct. 8 at Perkins Stadium during Family Fest weekend.

Historically, many of the ’Hawks top attendance records have been broken with either Family Fest or Homecoming games.