Sam Azzaro, junior at the University of Wisconsin-Whitewater is the leader of The Second Salem Paranormal Investigation Team who searches through paranormal sites that hold various legends and myths.

Azzaro was once a part of the Wisconsin Illinois Paranormal Investigation team and has done seven investigations so far.

Azzaro has had an interest in the paranormal world since they were eight years old. Their interest started when they started watching ghost hunters, and has carried that passion into their investigations for three years now.

“While I will continue to look for the truth into this realm, I wouldn’t consider myself a full believer and I’m quite skeptical at times. I try to look at everything from a critical and scientific view before looking into what ‘could’ be paranormal” Azzaro says.

The Royal Purple tagged along on a tour of the haunted isosceles triangle in Whitewater. The triangle consists of three grave yards and are known to be the key paranormal sites. The water tower, runs along the lines of the triangle. The points are made up by the Calvary, Hillside and Oak Grove cemetery.

The first and most iconic sites of the legend of Whitewater that Azzaro covered is the water tower, otherwise known as the “witches tower.”

“The water tower was built in 1889 and is the second oldest working tower in Wisconsin as it still has water at the top. It works on maintaining the pressure rather than dispersing water,” Azzaro said.

“This tower has faced some changes over the years, there is a gate that goes around the outside. Back in 2008 the gate was changed from having barbed wire on the top of facing inward as if to keep something inside instead of keeping people out. Currently the gate just has points going upward that makes getting inside the tower difficult. The gate is locked as well as the door to the tower, it is a big lock that is unlocked with a huge key of which is kept by the city, otherwise there is no way out once you are inside the tower” Azzaro said.

It is believed that witches are buried underneath the tower and are still alive.

2.)Second Stop of the tour-

The center of campus is the home to Calvary cemetery. It is said that most paranormal occurrences happen within the triangle and residence halls are not too far from this point of the triangle.

This is the resting place of spiritualist Morris Pratt and self-proclaimed witch Mary Worth. According to the Whitewater Chamber of Commerce Spirit Tour 2016, the legend of Worth suggests that she practiced witchcraft and cursed people living in Whitewater, including the Winchester family due to a dispute she had with the family.

In result of Worth’s curse, family members Charles, Mabel and Lucius Winchester died all within the same year and the family’s business was completely shut down by 1893.

The cemetery board decided against burying her in what they suspected was hollow ground despite Worth’s request to be buried in Hillside Cemetery. Worth was instead put to rest in an above ground crypt, in result Worth cursed all of Whitewater for going against her request.

Paranormal occurrences have been encountered in the residence halls by a few students, including Azzaro and vice president of Second Salem Paranormal Investigation Team, Libby Huggett.

“So with the residence halls here at UW-Whitewater there have been sightings of a little girl dressed in white. She supposedly goes around through each building. She’s been sighted in quite a lot of the older ones such as Clem, Bigelow, Lee, Wells, Knilans and Wellers. A lot of giggling and running up and down the halls and into the rooms has been claimed by a lot of students here on campus particularly myself” Azzaro said.

“My first year here I lived in Wells East on the seventh floor and I would always feel creeped out walking through the hall by myself. On the day of family fest I was in my room watching TV with the door open. Most people were at the football game or gone for the weekend. I was facing away from the door and heard a little girl giggling in the hall. I poked my head out and didn’t see anybody. I poked my head into the bathroom and in the other wing and nothing. I went back to my room and sat down and heard it again,” Huggett said.

If you are interested in joining, stop by the Second Salem Paranormal Investigation Team the weekly meetings on Thursdays from 6-7 p.m. in UC 266. 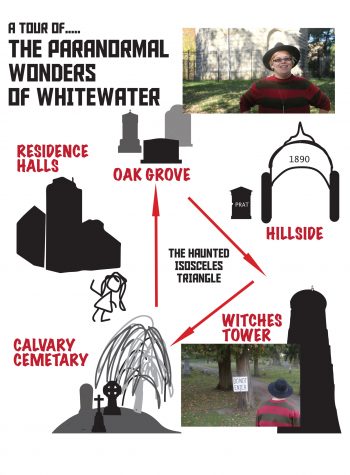